It’s been a segment tinged with disaster featuring all manner of blunders.

And Thursday’s This Morning once again left viewers in hysterics as Phillip Schofield and Holly Willoughby were forced to apologise after one caller swore live on air during another chaotic instalment of Spin To Win.

During the hilarious segment, Phil and Holly were incredulous as they made nine attempts to contact a contestant so they could spin the prize wheel, and when they finally found a contestant they failed to provide the correct answer. 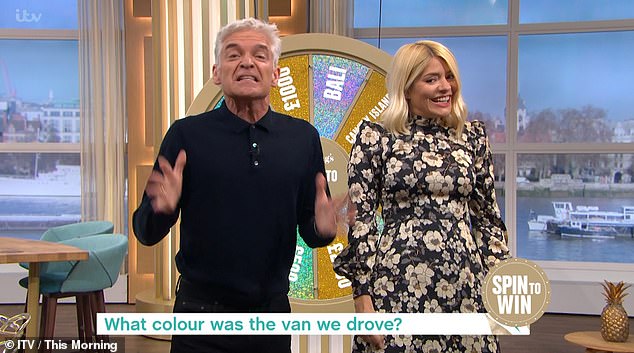 What’s happening? Thursday’s This Morning left viewers in hysterics as Phillip Schofield and Holly Willoughby were forced to apologise after one caller swore during Spin To Win

At the start of the segment, Holly and Phil explained that viewers would be called to be offered the chance to spin the wheel, and when they answered the phone hey had to use the password.

If they answered the phone with ‘hello’ or any other phrase, Holly and Phil would hang up and move onto the next person.

The first caller was a contestant named Louise, and she answered and said ‘it’s me,’ which led Holly and Phil to declare it was the wrong answer. 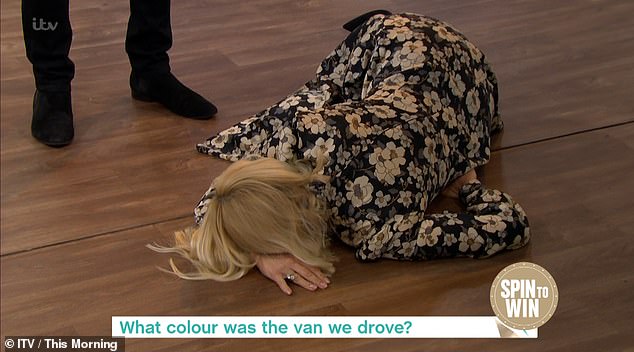 Incredulous: The presenters were incredulous as the game saw one viewer swear and nine others fail to pick up the phone, with Holly eventually collapsing to the floor in exhaustion

Louise then screamed ‘b****y hell,’ leaving the presenting duo stunned and saying ‘so sorry’ to viewers.

The segment went from bad to worse as Holly and Phil made several more calls to viewers, but they failed to answer.

On the fourth attempt, the viewer also failed to answer the question correctly, sparking a furious reaction from Phil. 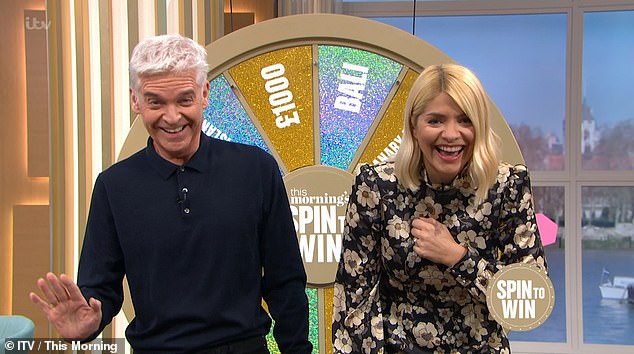 Nope! In the game, viewers have to answer a call with the password for the chance to answer a question and spin the wheel to win a prize 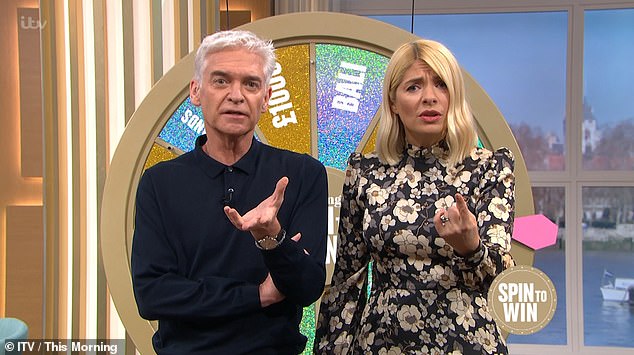 Oh dear! The first viewer failed to give the password and said ‘b****y hell’ forcing Phil and Holly to apologise to viewers

The calls continued, but yet more viewers failed to pick up the phone, leading Phil to say: ‘How could this go so wrong?’ while Holly added: ‘This is getting awkward.’

Finally, on their ninth attempt, a viewer named Caroline picked up the phone and gave the correct password: Goldfish.

She was then asked the pivotal question to earn a chance to spin the wheel: What colour was the three-wheeled van driven by Del Boy and Rodney in Only Fools and Horses? 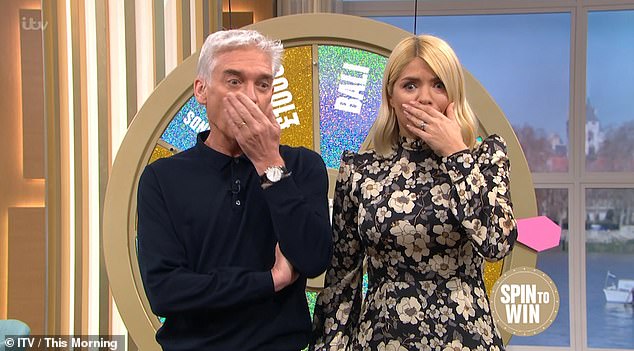 Outrageous: As the segment continued, Phil and Holly made eight more attempts to find a contestant, with each failing to pick up the phone 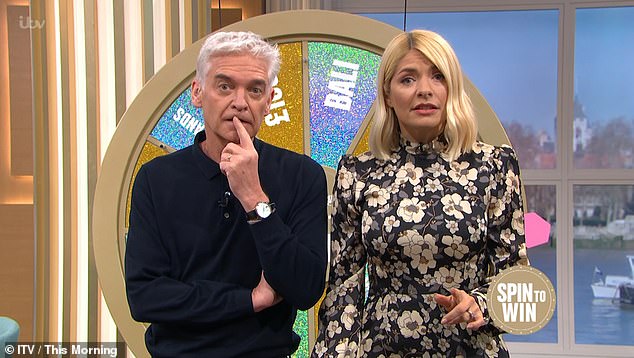 At last! Eventually one viewer managed to finally pick up the phone, but they failed to answer the question correctly

Carolina guessed the incorrect colour green, leading Holly to collapse to the floor in despair, before she and Phil literally handed her the answer Yellow.

At last this meant that she could spin the wall, and in an uplifting end she won a holiday to Bali.

Despite a bumpy end to the segment, viewers were left in hysterics by the disastrous game, and rushed to Twitter to praise the comedic scenes. 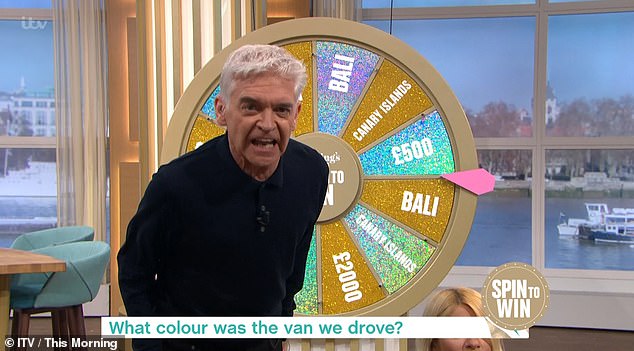 Outrageous! At one point Phil pretended to lose his temper with viewers, while Holly collapsed to the floor in despair 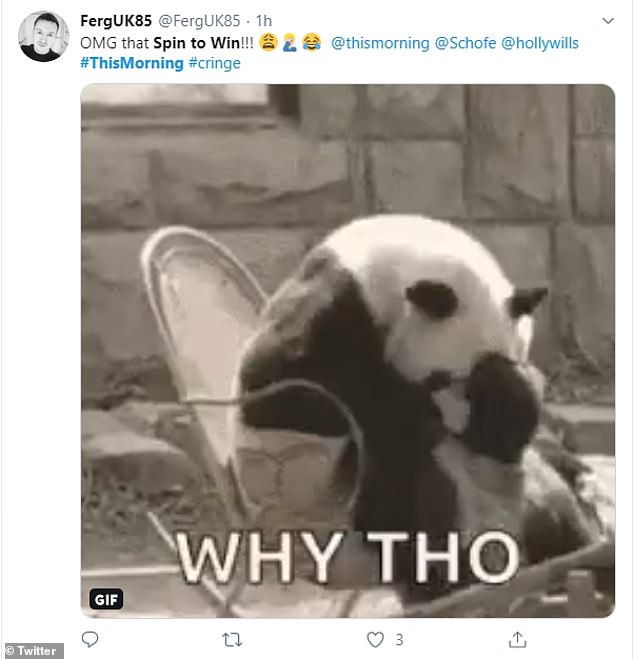 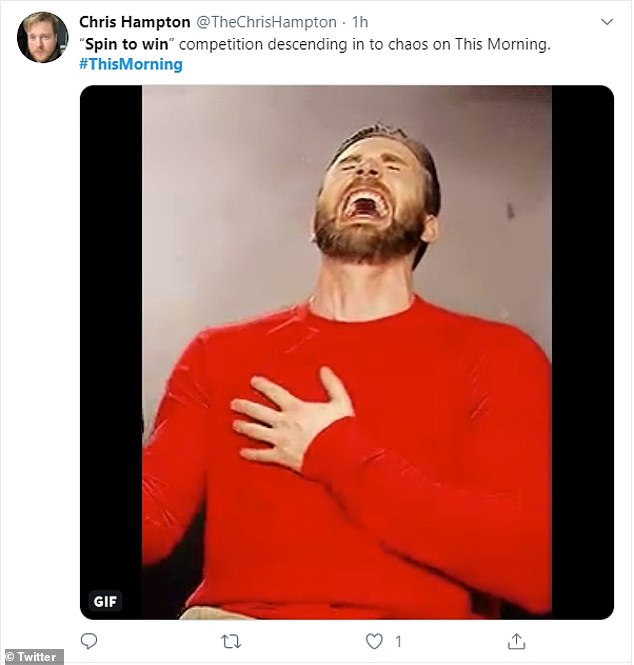 Oh dear! Despite a bumpy end to the segment, viewers were left in hysterics by the disastrous game, and rushed to Twitter to praise the comedic scenes

A third also wrote: ‘Spin to win cracks me up! Why enter if you don’t pick up the phone!’

Luckily it seems that after weeks of disaster surrounding the segment, This Morning producers have decided that enough is enough, as Holly and Phil also told viewers that this would be the last week they played the game.

This Morning airs weekdays from 10am on ITV. 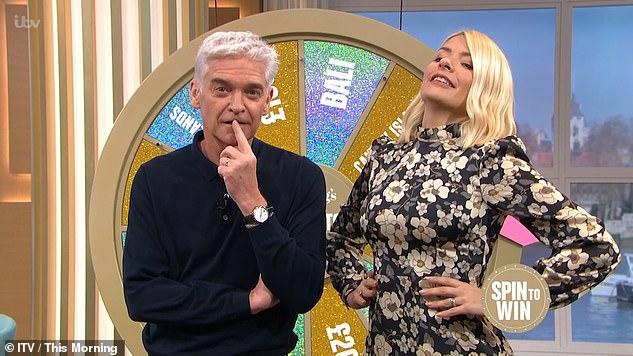 Finally: Eventually Phil and Holly gave away the answer to one viewer, and they were finally able to spin the wheel and win a holiday to Bali