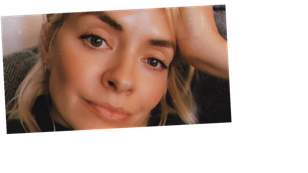 Holly Willoughby has admitted she “might sleep until Monday”, days after confessing she is “holding on”.

This Morning star Holly, 39, shared a gorgeous photo of herself as she unveiled her exhaustion with fans on her Instagram.

Holly’s photo shows her looking beautiful as she has a straight faced expression and looks into the camera for the snap.

In the image, Holly is wearing a small amount of makeup and has a black Nirvana t-shirt on as she rests her head in her hand.

As the stunning blonde posted the photo on her Instagram page, she admitted to feeling tired to her 7million followers in the caption.

Holly, who recently made a sweet offer to help a struggling single mum, wrote: “Friday… might sleep till Monday…” followed by a moon emoji.

This Morning star Holly’s photo received more than 203,000 likes from fans while some related to her candid confession in the caption.

One wrote: “Honestly I've slept the whole entire lockdown and I'm not bored of it as of yet” followed by two laughing face emoji.

While another remarked: “What a week” followed by a straight face emoji.

And a third sent a supportive message as they said: “Snap Mama! Home school and working hey? Chin up chick. You got this. X”

Holly’s confession comes after she admitted she’s “holding on” as she returned to This Morning after missing two days of the show.

As she made her comeback to the show on Wednesday 6 January, Holly told viewers: “Hello, good morning and welcome to your Wednesday morning, it's lovely to be back! “How are you, I've missed you! Are you all okay? I think we are just about holding on. Still holding on! Happy new year!”

During her time away, Holly’s co-host Phillip Schofield revealed Holly was dealing with childcare issues as she was covered by former The Saturdays singer Rochelle Humes on the ITV daytime show.

Speaking to viewers on Tuesday 5 January, Phillip teased that Holly was in fact taking part in The Masked Singer.

He joked: “Holly's not around today, she's just about to wrap up her filming commitments with The Masked Singer.

“She will be back with us tomorrow. The Badger, who would have thought it? Unbelievable but I guessed it from the off.”

Phillip explained: “We'll also say good morning to Holly who is watching at home, as Badger.

“She's dealing with her childcare issues at the moment and she will be back tomorrow.”

Holly is mum to son Harry, 11, daughter Belle, nine, and Chester, six, who she shares with husband Dan Baldwin.