It wasn’t all love and flowers and Woodstock in 1969 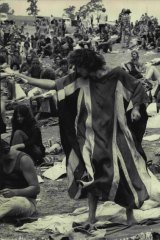 There was nothing to compare with Woodstock in Australia until the first Sunbury rock festival on a farm north of Melbourne in January 1972 (though there had been a handful of less-sucessful events starting in 1970 with Ourimbah, NSW, a rained-out “Launching Place Miracle” outside Melbourne, and in 1971, Wallacia in NSW and Myponga in South Australia).

Having been in school in 1969, my personal tilt to hippie freedom didn’t happen until 1971, when I hitchhiked from Victoria to Far North Queensland and back, watching Easy Rider at a cinema in Rockhampton where the patrons all had ashtrays in the arms of their seats, and getting terrorised by the locals at a little sugar town called Sarina because I wore a cheesecloth shirt and love beads.

In 1969, PM John Gorton won an election against Labor’s Gough Whitlam (the 10th win in a row for the Liberals). It wasn’t until 1972 that Whitlam’s message of “It’s Time”, backed by flower-power singers and bands, got the national nod.

We’d been changed by the music of the ’60s, of course – the Beatles, the Stones, Jimi Hendrix and on and on – but 1969 was a bit special for reasons less than joyous.

The Beatles arranged to have themselves photographed on August 8 – the day before the Manson family went bloodily berserk in California – famously walking across a zebra crossing for the cover of the Abbey Road album, which was released to wild acclaim on September 26.

Meanwhile, however, on September 20, John Lennon had privately told the other Beatles he was quitting the group (though it was kept secret for several more months). Abbey Road would turn out to be the last album recorded by all four Beatles (though Let It Be was released later).

It took the Rolling Stones to put the decade to death. On December 6, the Stones released an album called Let It Bleed. The next day they hosted a concert at the Altamont Speedway in northern California – supposed to be a Woodstock of the West – which ended with an 18-year-old boy stabbed to death by a member of the Hells Angels. Let it bleed, indeed. The founder of the Stones, Brian Jones, had died just six months before, drowned in his own swimming pool.

Peace and love were running short all over the place.

On August 14, 1969, the British sent troops to Northern Ireland to “restore order” after an outbreak of sectarian violence. 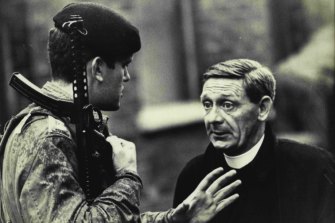 September 1969: a British soldier in Belfast argues with a priest as barbed wire is put up in Dover Street after the riots of the previous month.Credit:United Press International

It was the start of  the longest British military deployment in history: over 37 years of The Troubles, the military would kill 307 – more than half of whom were civilians – and Britain would lose 1441 soldiers, half to paramilitary attacks.

Richard Nixon was sworn in as the 37th president of the US in January 1969. All these years later, as much of the world reels daily at the madness of the latest President, Nixon seems almost balanced, though he was a crook and eventually resigned, devoured by the Watergate scandal. He had, at least, withdrawn his nation from the long and terrible waste of Vietnam.