Jeffree Star Shuts Down Kanye West Affair Rumors: “This Is the Dumbest S–t” 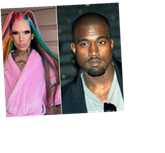 Yes, Kim Kardashian is going to file for divorce from Kanye West in the near future.

This appears to be a certainty at this point.

But Jeffree Star wants everyone to know one thing:

It will NOT be due to his relationship with the rapper.

As you may have heard about this week, there’s speculation going around about Kanye and Star — who is a singer/songwriter/beauty and makeup maven — being engaged in some sort of illicit affair.

The influence initially scoffed at the notion.

He made a joke about the rumor that both he and Kanye are spending time in Wyoming these days… therefore they must be banging!

“I’m ready for Sunday Service,” Star wrote as a caption to an Instagram photo on Wednesday.

This was an apparent reference to West’s well-known Christian gatherings.

Unfortunately, trying to mock a supposed scandal does not always put an end to chatter about that scandal.

And, with the Internet continuing to buzz about the inevitable Kim and Kanye split, Star has now spoken out once again.

He wants to make sure no one blames him for the end of this marriage.

On Thursday, Jeffree shared a tell-all YouTube video, “Addressing The Kanye Situation,” in which he called the allegations “the dumbest s–t I think I’ve ever read in my entire life.”

At the outset of the footage, which was shot on January 6, Jeffree walks around his garage in a pink bathrobe, sipping a Red Bull and scrolling through memes about him and Kanye.

“I woke up and my phone was blowing up and I’m like, ‘Oh my God, what in the scandal is going on today?’ I honestly had no idea, right?'” he says

“I’m keeping to myself. I’m living in this beautiful state. I’m loving life.”

Kanye has been holed up, away from his family, in this same state for several weeks.

Moreover, a popular TikTok user has hinted that there’s a romance brewing between Star and West and, well… that’s about it.

That’s the entire basis for some folks these two are getting it on.

Star said on video that he got “a million” texts, phone calls and inquiries from news outlets about the Kanye rumors.

He then pointedly shut down accusations that he has slept with West.

“I’m single. I’m not sleeping with anyone,” he revealed.

“I like very tall men. Me and Kanye have never hung out, and this whole thing is really funny.”

So there you have it.

West, for the record, has not yet spoken out about this rumor — or about the very, VERY strong rumor that Kardashian is ready to move on from her husband.

She has allegedly spoken to a divorce attorney.

And she is allegedly just waiting until the right time to file and to tell the public about her plans.

You can blame the reality star’s focus on prison reform for the break-up, or Kanye’s crazy Presidential campaign for the split, but do not blame Star.

In his new YouTube video, Jeffree says a TikTok user “made up a whole lie,” adding that all the online speculation is “so weird.”

He even spread a wild theory that Kris Jenner miight be the source of the falsehood, giving her props if so: