He built a ‘dream home’ with ex-wife Meghan King Edmonds during their marriage.

But now the massive walk-in closet Meghan helped design belongs to someone else.

Jim Edmonds, 50, posted video of his new girlfriend, Kortnie O’Connor, moving her belongings into the room on Thursday. 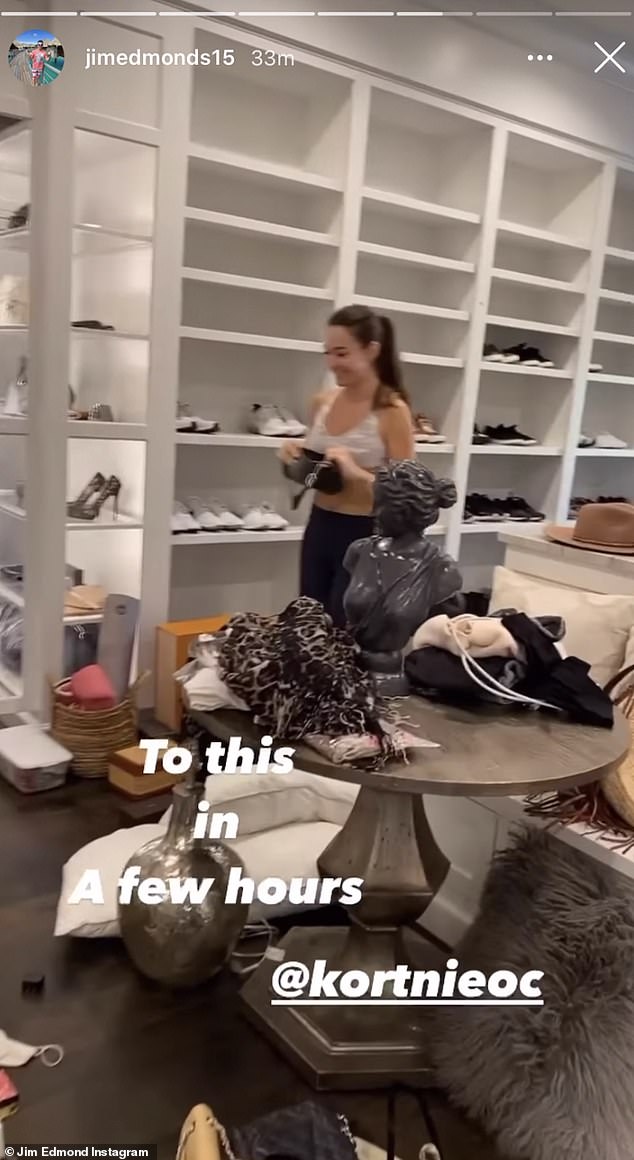 Kortnie was busy unpacking her clothing and placing them upon the many dressers when Jim walked in, amused at the sight of the room. 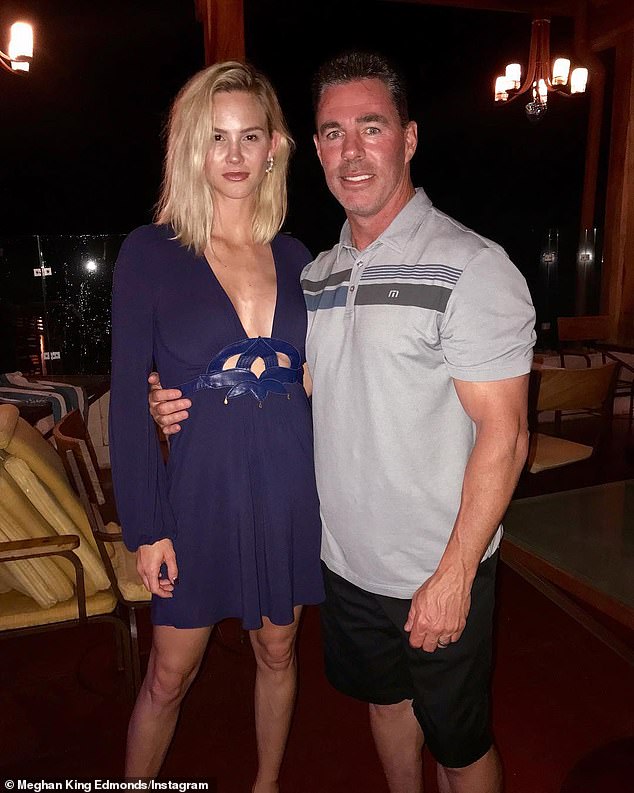 Broken foundation: Edmonds’ and his ex Meghan are in the middle of an ugly split 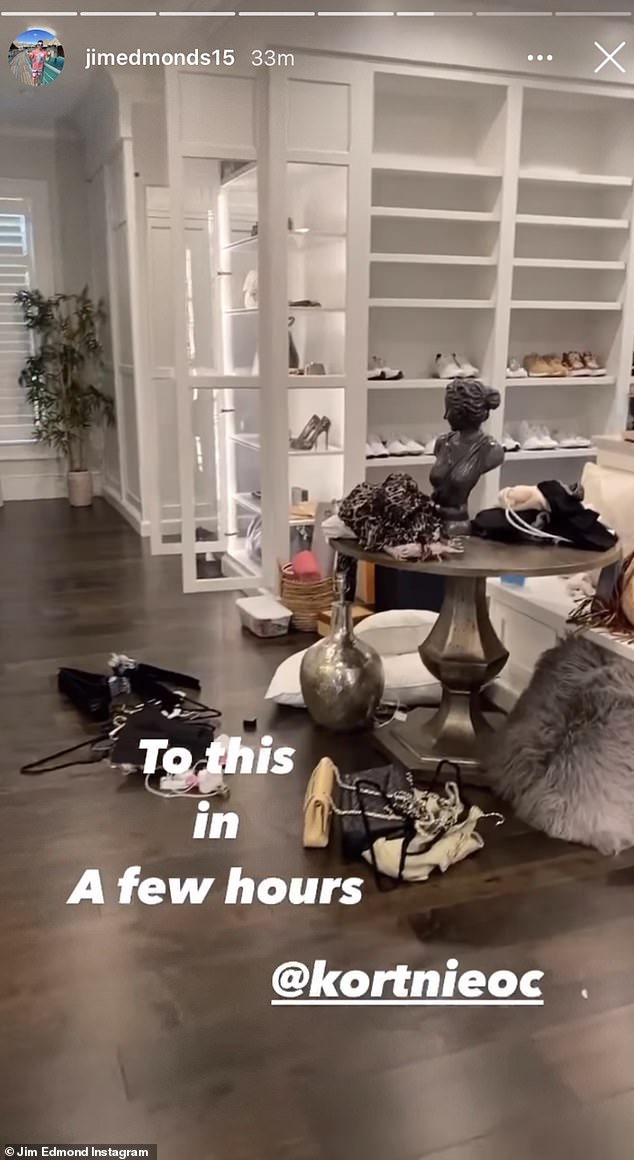 Luxurious: It didn’t take long for Kortnie to make major headway into unpacking 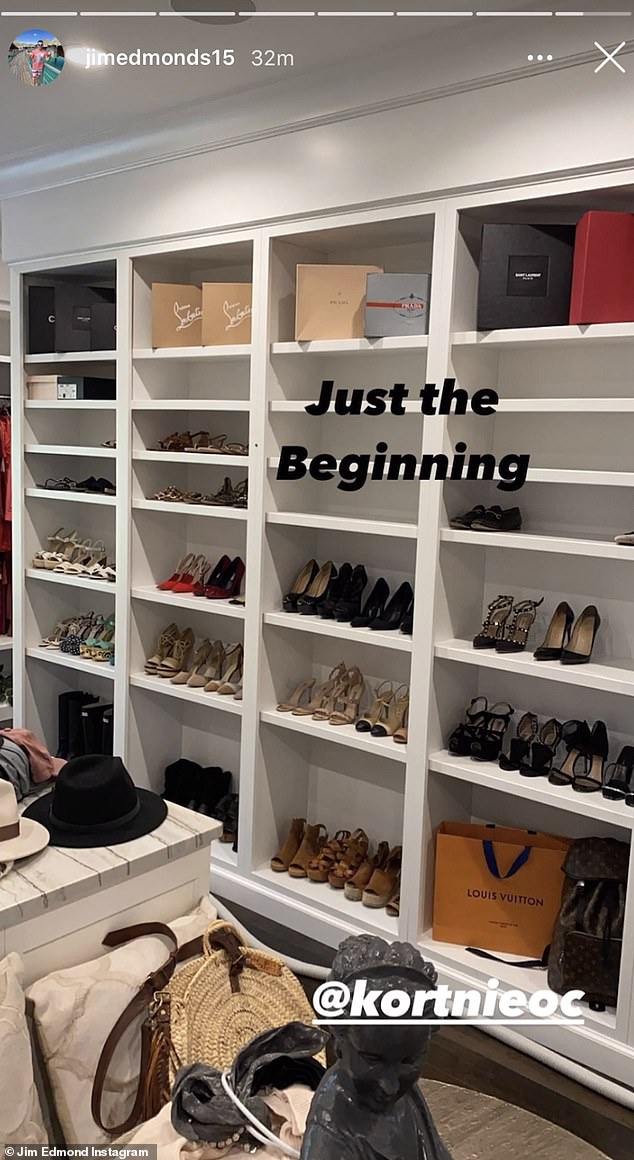 Indeed, Kortnie had gotten quite a lot done.

Jim panned the camera around the room to show just how much Kortnie had completed within a few hours.

Clothes hung upon the racks, while countless pairs of shoes and handbags were placed inside the massive dresser.

Kortnie placed her many hats upon a table at the center of the closet, which was decorated with a vase of flowers. 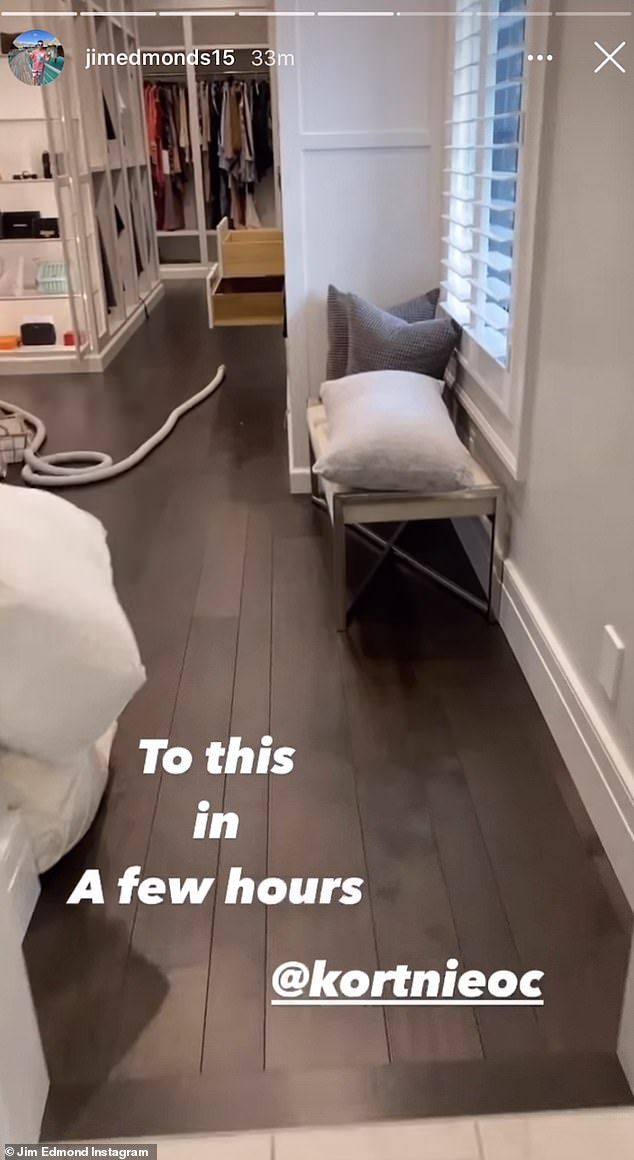 Dream closet: Kortnie’s clothing hung at the back of the luxurious walk-in 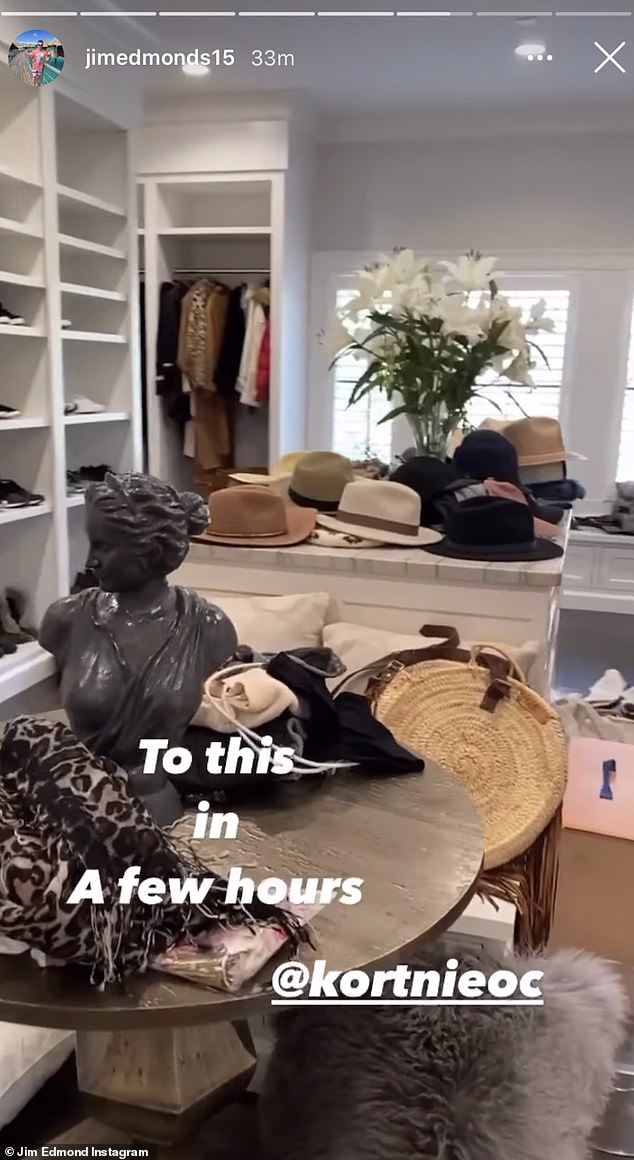 Hat’s off to her: Kortnie placed her many stylish hats at the center of the closet

At the back of the room, empty boxes were piled up, showing just how much Kortnie had brought into the house.

Jim and Meghan began building their ‘dream house’ in St. Louis during their marriage, and were both heavily involved in designing the house.

Meghan even revealed they had ‘date nights’ inside their closet during construction.

The former baseball pro started dating Kortnie after the end of their marriage, however the relationship is more complex than it may seem on the surface. 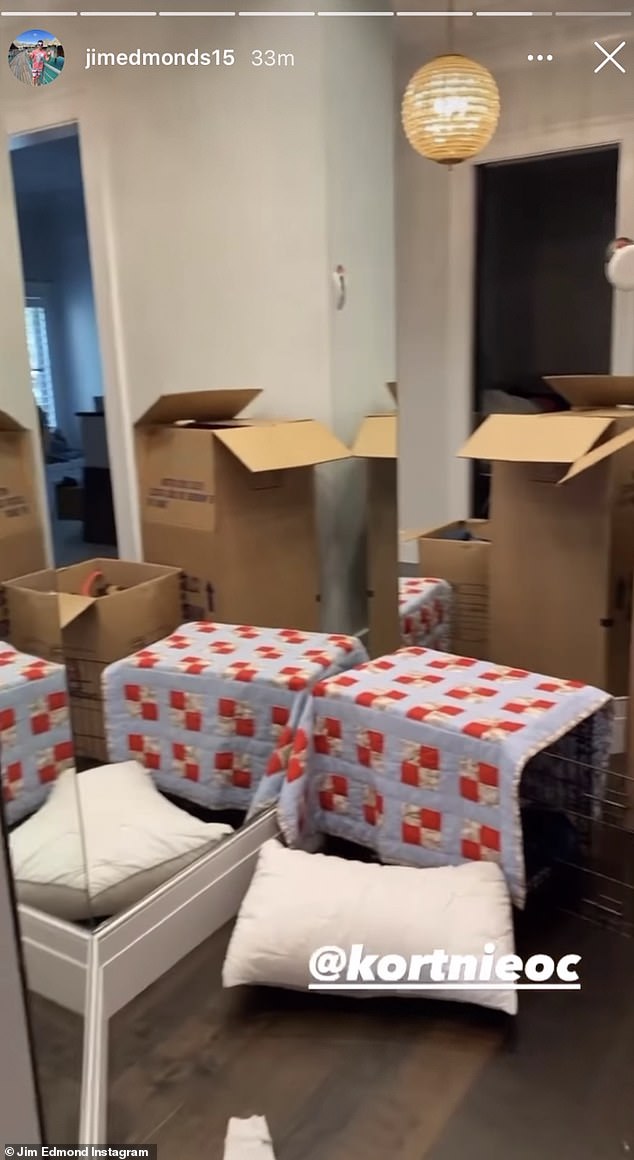 Major progress: Edmonds showed off the many boxes Kortnie had brought in 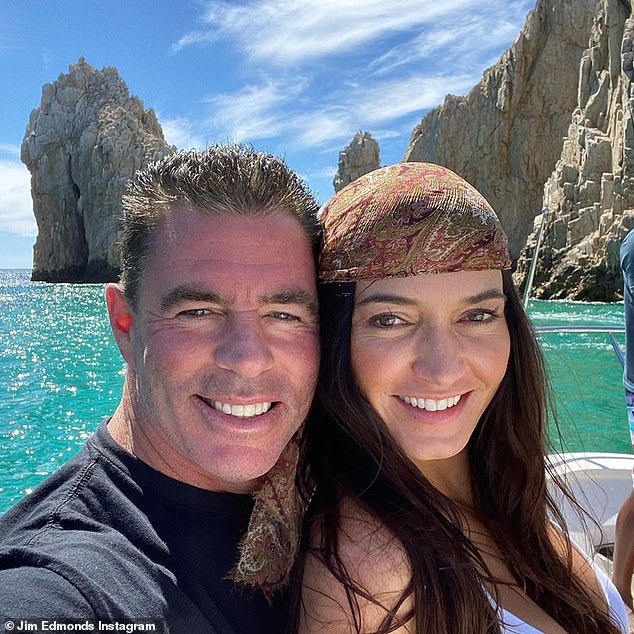 The relationship has obviously been progressing quickly, with Kortnie now moving into the house.

This all comes after Jim’s ex Meghan announced that their son Hart, two, has cerebral palsy. 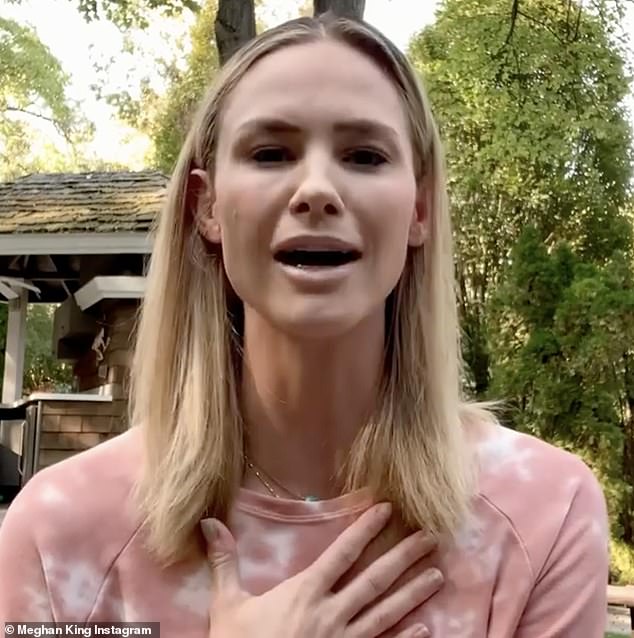 Breaking the news: Meghan revealed on World Cerebral Palsy Day this Wednesday that her two-year-old son Hart has the illness

The child was diagnosed only this Tuesday, slightly over a year after Meghan revealed he had the rare brain disorder periventricular leukomalacia (PVL).

‘So his specific diagnosis is hypotonic cerebral palsy which essentially means that his muscles are loose or floppy,’ she said in an Instagram video.

Meghan shares Hart, his twin brother Hayes and their three-year-old sister Aspen with Jim Edmonds whom she is in the process of divorcing.

Jim’s representative Steve Honig has said that Hart’s father was not told about the diagnosis before Meghan went public.

‘Jim is unaware of any such diagnosis and, if it is even true, it is completely unconscionable and absolutely disgraceful that Meghan would announce this on social media without discussing it with him first,’ said Steve to The Blast.

Last July amid Jim’s cheating scandal she revealed Hart had PVL, writing on her blog that he had ‘irreversible brain damage’ and was at risk of cerebral palsy. 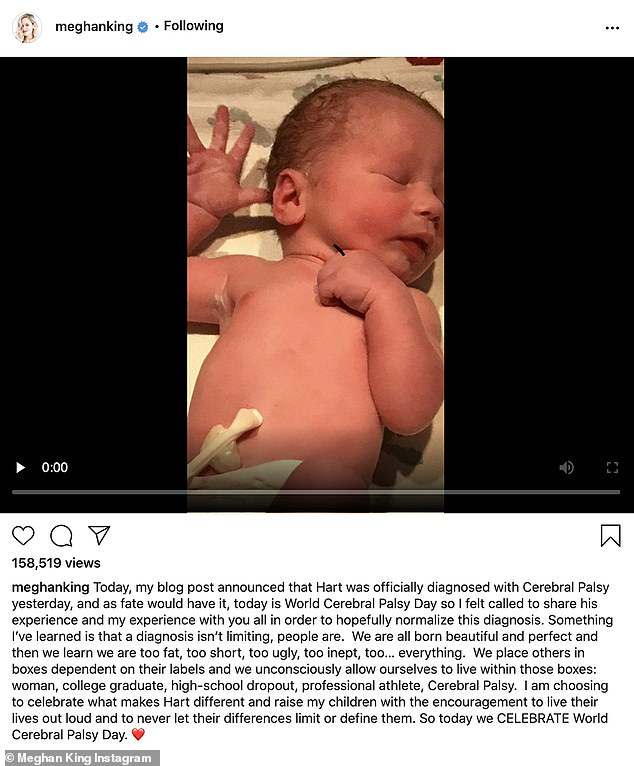 Details: ‘So his specific diagnosis is hypotonic cerebral palsy which essentially means that his muscles are loose or floppy,’ she said in an Instagram video 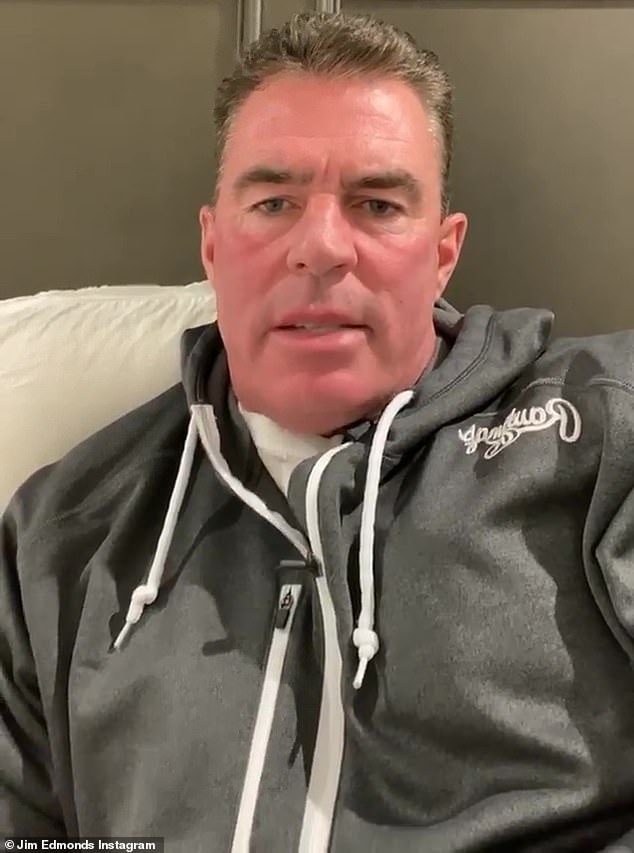 Anger: Jim’s representative Steve Honig has said that Hart’s father was not told about the diagnosis before Meghan went public

Since his diagnosis with PVL last year Hart has undergone treatments including physical therapy and the use of a hyperbaric chamber.

When she was finally told this Tuesday that he does have the condition she was ‘shocked’ to discover she was ‘totally unfazed.’

She explained her reaction in her Instagram video: ‘I knew that Hart has CP and had it and it was just a matter of you know getting that name to it.’

Meghan also shared that ‘you can reconfigure the neuro-pathways within your brain, my brain, anyone’s brain to learn to do things that the active parts of the brain wouldn’t normally have to learn how to do.’ 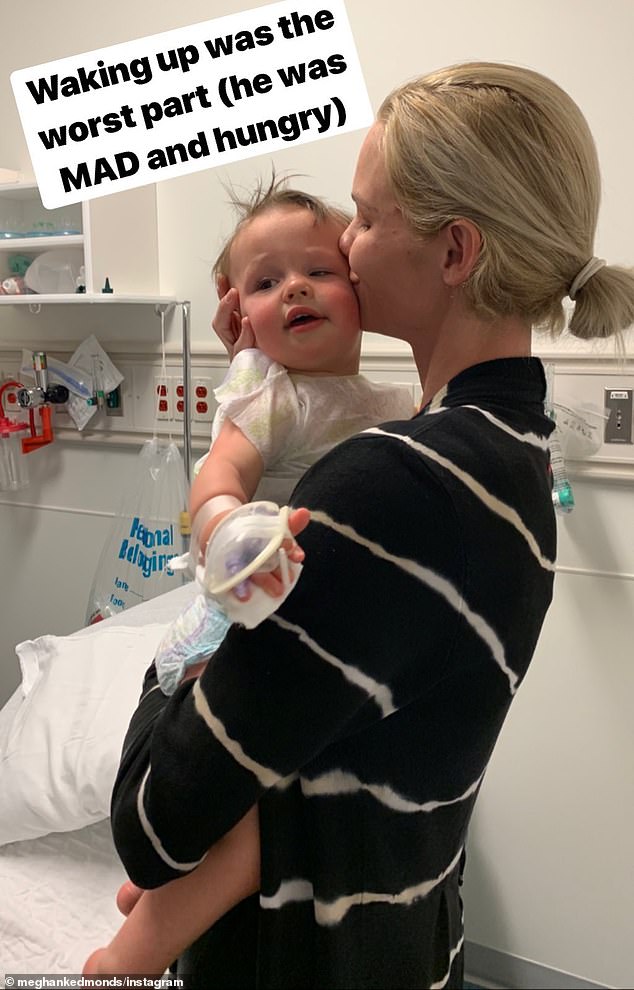 History: Last July she revealed Hart had periventricular leukomalacia (PVL), writing on her blog that he had ‘irreversible brain damage’ and was at risk of cerebral palsy

She noted that ‘what I did was through help of therapy and these amazing therapists teach Hart how to walk and how to perform other physical skills by using different parts of his brain. Now it’s not natural but his brain was able to rewire in those ways and learn those skills with a lot extra work.’

The former Real Housewife Orange County star reflected that ‘diagnosis’ was ‘a hard-hitting word’ and pointed out that Hart will now be ‘known as officially, you know, a kid with a disability and that can be very heavy.’

Meghan recounted a story of being at a Trader Joe’s checkout line with Hart, who ‘kinda moves a lot’ even while standing still as one of his symptoms.

Another woman in the line who was ‘not being mean’ asked him genuinely if he was dancing and when he realized her misconception, he began to actually dance. 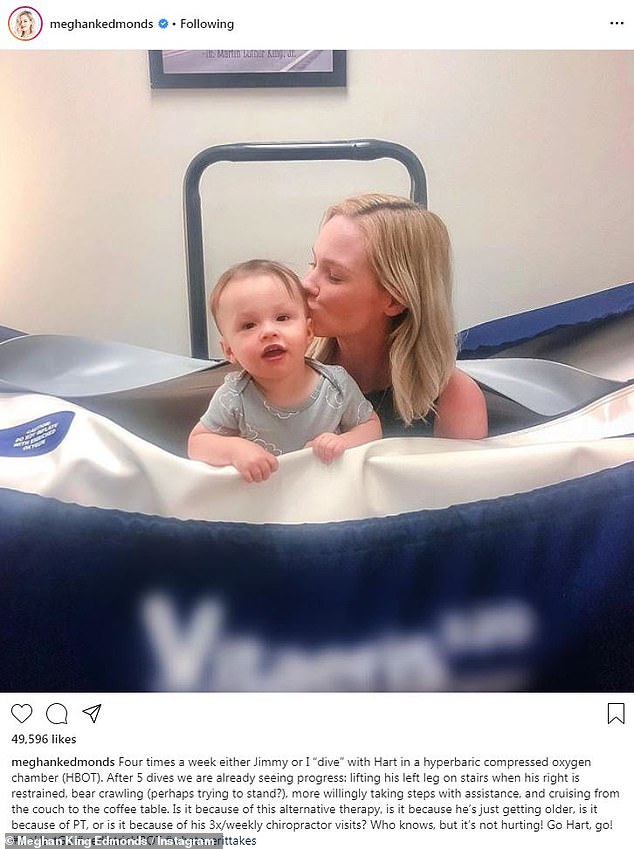 Baby mine: Meghan shares Hart, his twin brother Hayes and their three-year-old sister Aspen with Jim Edmonds whom she is in the process of divorcing

What this meant to Meghan was that ‘he is not the kinda kid to internalize somebody else’s preconceived notion or idea of what his you know physical behavior looks like, which looks like dancing, which is really standing.’

Meghan confessed it can be ‘frustrating for me as a parent to look at my kid and know that his brain is working in a way that I cannot possibly understand.’

Hart can have trouble verbalizing his thoughts because of problems moving his tongue, resulting in ‘temper tantrums’ when he grows ‘frustrated.’ 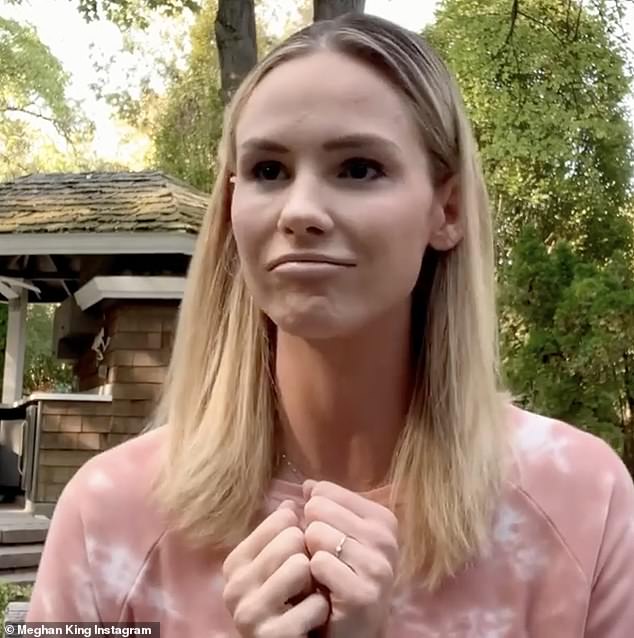 Emotional honesty: She argued: ‘You know, you can react in a lot of different ways and it’s important – I wanna stress this – it’s important to feel all those ways’

However he is ‘cognitively typical’ which is to say ‘his brain learns normally, you know whatever normal means. He perhaps can overcome some of those behaviors that should be social norms because he understands what is normal or looks normal and so he can adapt in those ways.’

Meghan said: ‘If you are sad, cry. If you’re angry, scream. If you’re frustrated, if you’re jealous, feel those feelings, okay? Feel all of them. But you have to change your mindset, because without changing your mindset as a conscious decision you will continue to wallow in what could have been or you know what others have.’ 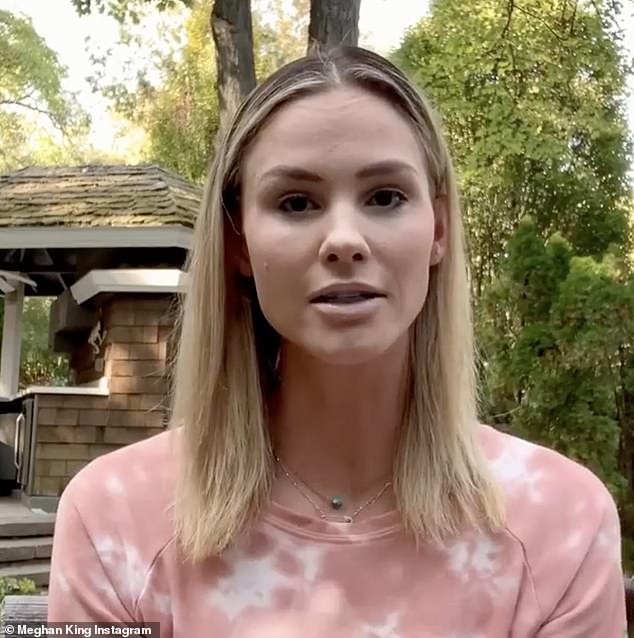 ‘We are all born beautiful’: ‘Something I’ve learned is that a diagnosis isn’t limiting, people are,’ Meghan wrote in the caption of her video 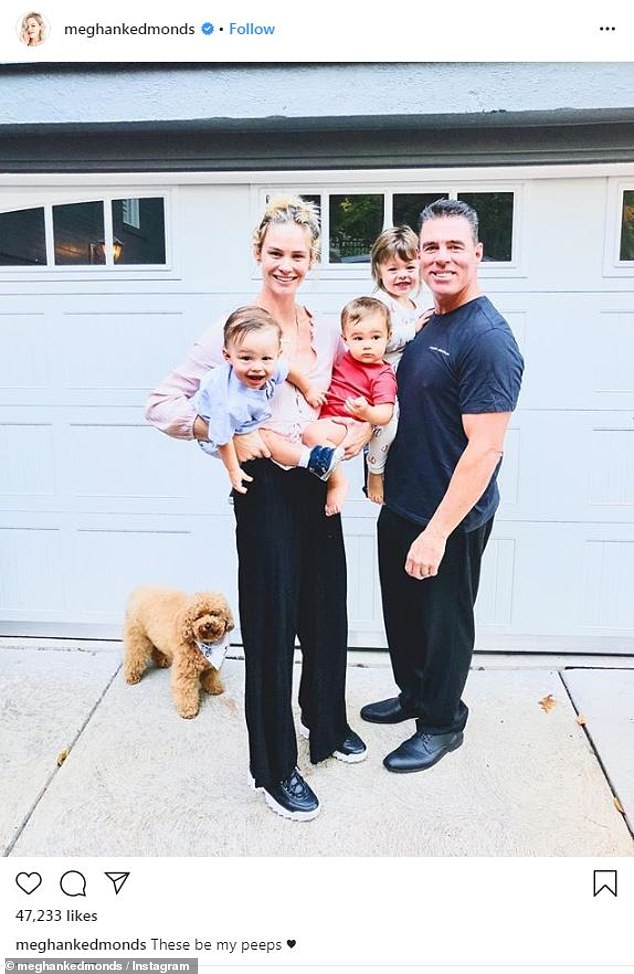 They way they were: The star is seen with the kids and her estranged husband Jim

‘Something I’ve learned is that a diagnosis isn’t limiting, people are. We are all born beautiful and perfect and then we learn we are too fat, too short, too ugly, too inept, too… everything,’ Meghan wrote in the caption of her video.

‘We place others in boxes dependent on their labels and we unconsciously allow ourselves to live within those boxes: woman, college graduate, high-school dropout, professional athlete, Cerebral Palsy.’

She wrote: ‘I am choosing to celebrate what makes Hart different and raise my children with the encouragement to live their lives out loud and to never let their differences limit or define them. So today we CELEBRATE World Cerebral Palsy Day.’ 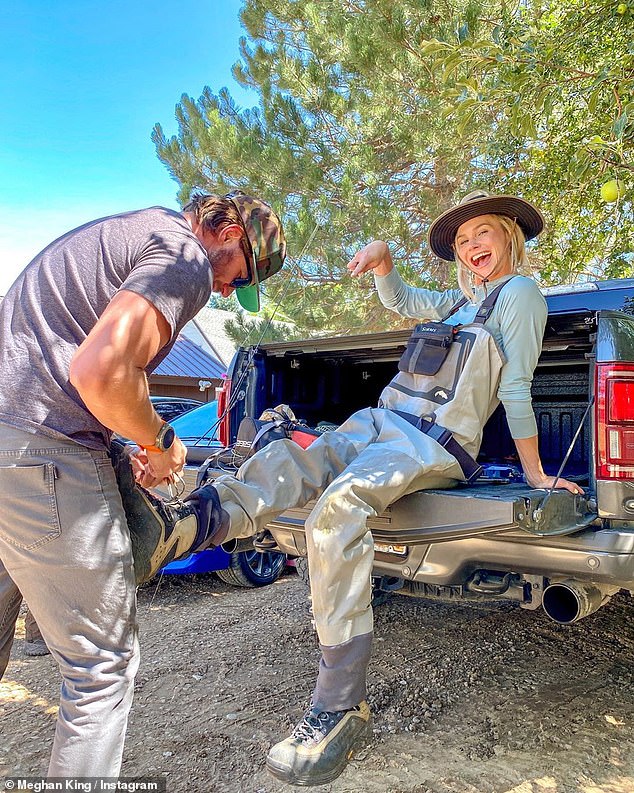 A good summer: The TV star has been enjoying the great outdoors with her new boyfriend Christian Schauf, a 39-year-old businessman from Park City, Utah AOC tells Jane Fonda being Trump’s ‘public enemy No. 1’ is a good thing