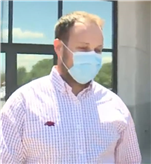 We’re still about six weeks away from Josh Duggar’s child pornography trial, but if recent developments are any indication, tbe former reality star might want to come to terms with the fact that he’ll be sporting an orange jumpsuit before the year is out.

There was a time when it looked as though Josh’s lawyers might succeed in creating a shadow of doubt about his guilt.

Don’t get us wrong: Josh is clearly guilty.

But if his lawyers had been able to muddy the water enough to create the slightest kernel of uncertainty, he might have beaten the charges.

Now, that ship seems to have sailed.

Earlier this week, we learned that Josh was once so confident he would go free that he refused a plea deal offered by prosecutors.

We’re guessing he’d like to have that opportunity back in light of reports that a former co-worker has informed on him.

According to a new report from Radar Online, when Josh’s lawyers tried to have the charges against him dismissed last month, prosecutors made several bombshell revelations while fighting against such a move.

The DA’s office went into painstaking detail about the evidence that they discovered on Josh’s computer.

They revealed that they found the explicit images and videos hidden behind a fake program on Josh’s laptop.

Even more incriminating was testimony from an employee of Josh’s, who told investigators that Josh was the only one who ever used the laptop on which the evidence was found.

“Law enforcement determined that one of these individuals—identified as ‘Witness #3’ in the defendant’s motion—worked at the car lot and interviewed him,” reads one filing from the prosecution.

“The individual told law enforcement that he began working at the defendant’s car lot in June 2019, that he did not access the internet at work, and that the computer in the office on the car lot belonged to and was only used by the defendant.”

Josh had previously claimed that the photos and videos were stored on his computer by a discruntled employee who wanted him to be arrested.

It was always an unlikely story, but just to be safe, investigators took steps to ensure that the witness they spoke with wasn’t looking to frame Josh because of some personal grudge.

“Law enforcement that he was very inexperienced with computers and did not have social media accounts,” court documents read.

“After obtaining his consent, law enforcement manually reviewed the contents of the individual’s phone on scene without the use of a forensic tool, found no evidence of criminal activity on it, and returned the device to this individual.”

Obviously, that’s doesn’t definitively prove that this witness isn’t involved in an elaborate conspiracy to set Josh up.

But considering the fact that Josh is the only one making that claim, and there’s no evidence to support it, investigators probably don’t feel the need to waste much more time on it.

Nor will they be looking into Anna Duggar’s claims that her husband has been framed by the Biden administration.

What they will do is continue creating an airtight case against the defendant that will hopefully undermine his lawyers’ attempts to create confusion in the courtroom.

We don’t want to jinx it — but it sounds more and more like justice might actually be served in this case.