Kara Bass and Guillermo Rojer Clash Over Money: She’s Not My Mom! 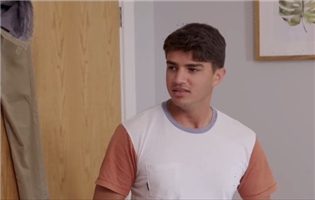 There’s more to those titular 90 days than figuring out compatibility and deciding whether or not to marry.

The non-American partner is unable to work for months, even after marrying, putting an added financial strain on the couple — and a personal one.

For Kara Bass and Guillermo Rojer, being together in America now means coming into conflict in new and unexpected ways.

In this sneak peek clip, Guillermo wants something, and Kara’s response is basically: “Not now, Guillermo.”

29-year-old Kara and 23-year-old Guillermo are together in Virginia, but they’re now clashing about money.

As this sneak peek for Season 9, Episode 4 shows, Guillermo wants a computer — specifically, a laptop — but Kara is balking at spending that.

“I’m, like, a little bit blindsided at this sudden want of a computer,” Kara says, “when he knows that we’re on a tight budget right now.”

“I’m, like, getting started in my real estate career,” Kara says, “and he’s not able to work for God knows how long.”

To Guillermo, Kara reminds him that they have “money set aside to last the entire time” before he is finally able to work.

Kara goes on: “A computer? I don’t really know that that’s, like, a thing that we could do right now.”

Guillermo disagrees, reminding her: “I sold my bike. Maybe with the money for the bike, I can buy the computer. Why not?”

Kara reminds him: “Okay, well, that’s like a sixth of our entire budget on one thing that you’ll be using by yourself.”

Guillermo knows that it’s a shared fund, but argues that since he contributed to it by selling belongings in the DR, this expense is within his rights.

“Right, but at some point, it’s my money, too, and I want to spend it,” Guillermo says.

Kara then suggests that he can use her computer, but Guillermo is afraid that this could lead to conflict — not just from sharing one computer, but if he messes it up.

Guillermo asks if Kara is trying to “control” their finances.

She counters: “We have to make sure you have the things you need right now.”

Kara emphasizes: “Need now, not want, because there’s going to be things that come up that we’re not planning on.”

“We’ll have to leave money for those things,” Kara argues. “That’s why a computer doesn’t make any sense right now because like, we don’t need it..”

Guillermo asks Kara if she thinks that she is “the boss,” and she replies with a very honest “sometimes.”

To the camera, Guillermo complains that he feels like she is talking down to him and making these decisions for him.

“We are, like, building a life together,” he explains. “I just got here and you want to control me.”

Guillermo then adds: “I mean, she’s not my mom.”

They’re both right in some ways.

Kara is right that saving money is important.

Guillermo is right that he probably needs his own computer — that’s pretty basic.

However, they are both being insensitive towards each other.

Kara is being a little unilateral and may not be thinking about what these next several months will be like for her fiance and future husband.

Guillermo might not be being realistic when it comes to the money that they have saved.

It’s absolutely a possible red flag to see this couple not handling this very reasonable dispute all that well.

Only time will tell if this is part of a pattern.

Maybe they’ll figure this out by the end of the episode … or maybe this is just teh beginning.

One reasonable compromise would be for the two of them to find a computer that is less expensive.

A $1000 laptop is not high end, necessarily, but they could get a device just as good if not better if they looked for a desktop PC.

That could shave hundreds of dollars off the price while still meeting whatever needs Guillermo has.

The real issue, though, is that Kara and Guillermo should have worked this out in advance.

“I need a computer” is a pretty basic need, just short of things like “a bed” and “a phone,” especially for someone who can’t currently work.

Kara and Guillermo are both adults, even if they’re both in their twenties, and could have had this out long ago and found a good solution then.