Kara Bosworth shares heartbreaking tribute to son McCoy who died during childbirth one month ago: ‘I still wear you on my heart all day’

Kara Bosworth has acknowledged the tragic loss of her son McCoy one month after his birth.

The 32-year-old shared a heartbreaking tribute to her boy on Instagram, along with a photo of her husband Kyle Bosworth touching his forehead to McCoy’s.

‘You would have been 1 month old today,’ began Kara’s caption. 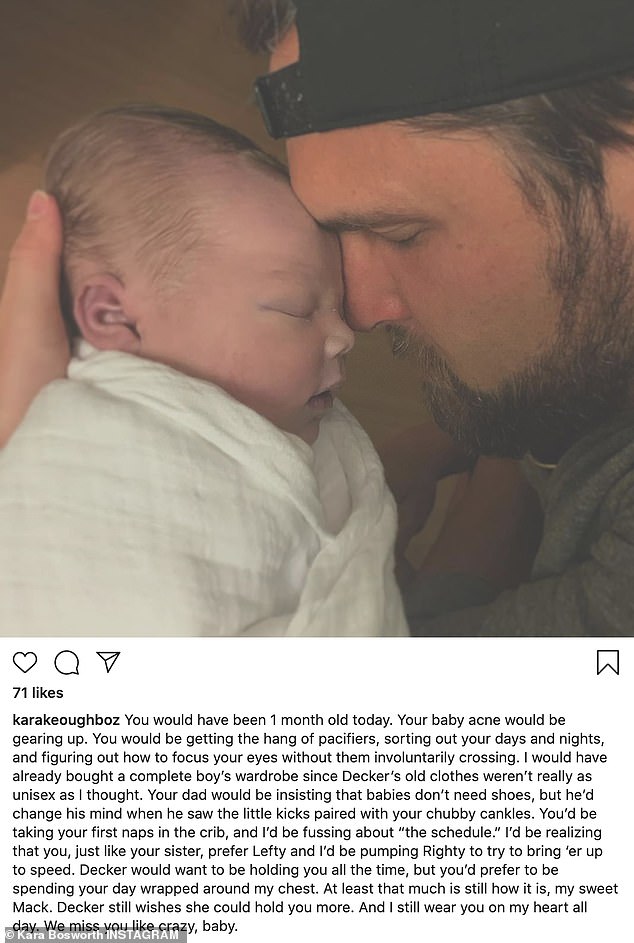 The heart-rending message continued, ‘Your baby acne would be gearing up. You would be getting the hang of pacifiers, sorting out your days and nights, and figuring out how to focus your eyes without them involuntarily crossing.’

‘I would have already bought a complete boy’s wardrobe since Decker’s old clothes weren’t really as unisex as I thought. Your dad would be insisting that babies don’t need shoes, but he’d change his mind when he saw the little kicks paired with your chubby cankles.’

‘You’d be taking your first naps in the crib, and I’d be fussing about “the schedule.” I’d be realizing that you, just like your sister, prefer Lefty and I’d be pumping Righty to try to bring ‘er up to speed.

‘Decker would want to be holding you all the time, but you’d prefer to be spending your day wrapped around my chest. At least that much is still how it is, my sweet Mack. Decker still wishes she could hold you more. And I still wear you on my heart all day.’ 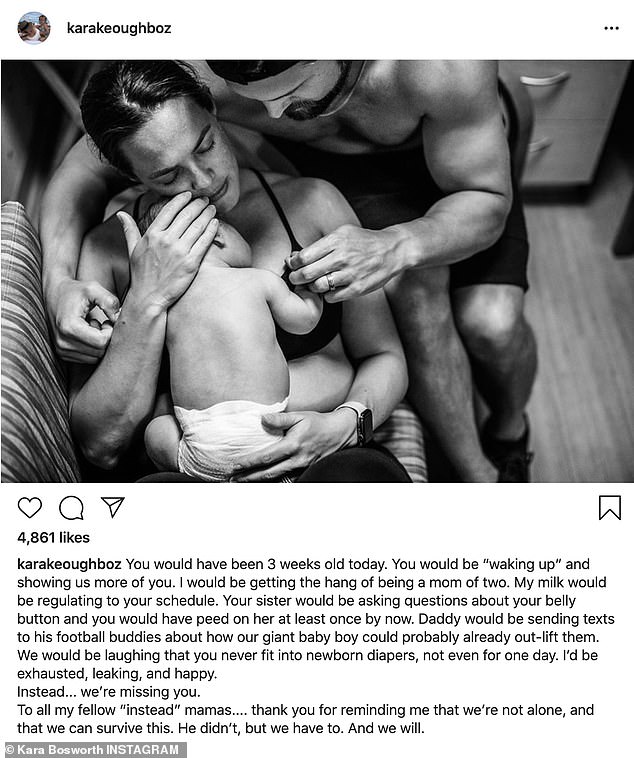 McCoy tragically passed away on April 6 during an intense labor 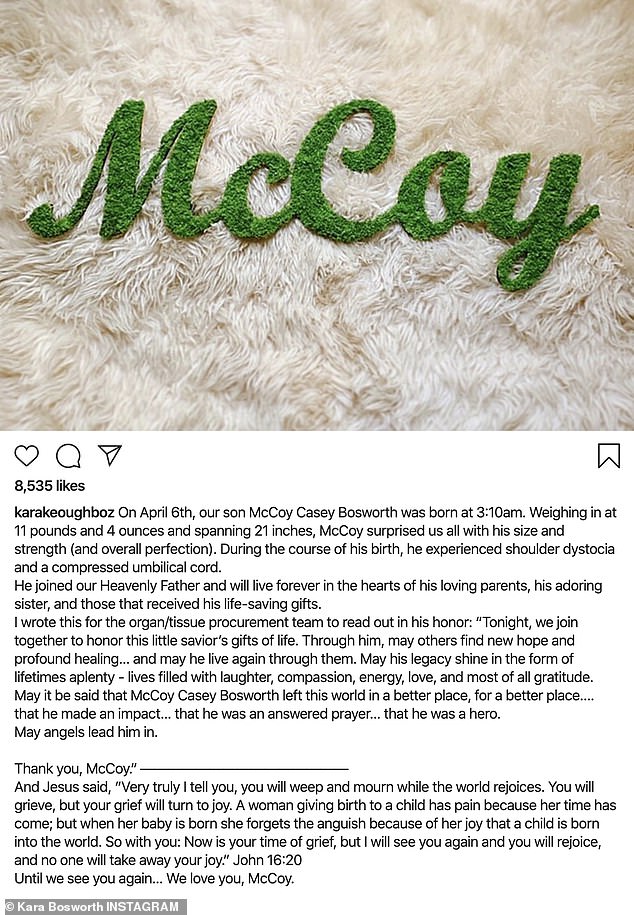 ‘Until we see you again’: Kara revealed her son McCoy died last month in childbirth from shoulder dystocia and a compressed umbilical cord

McCoy tragically passed away on April 6 during an intense labor.

The daughter of former Real Housewives of Orange County star Jeana Keough shared the tragic news earlier this month that she had lost her son.

‘On April 6th, our son McCoy Casey Bosworth was born at 3:10am. Weighing in at 11 pounds and 4 ounces and spanning 21 inches, McCoy surprised us all with his size and strength (and overall perfection).

‘During the course of his birth, he experienced shoulder dystocia and a compressed umbilical cord.’

Shoulder dystocia is a birth injury that happens when one or both of a baby’s shoulders get stuck inside the mother’s pelvis during labor. In the majority of cases the baby is born safely. 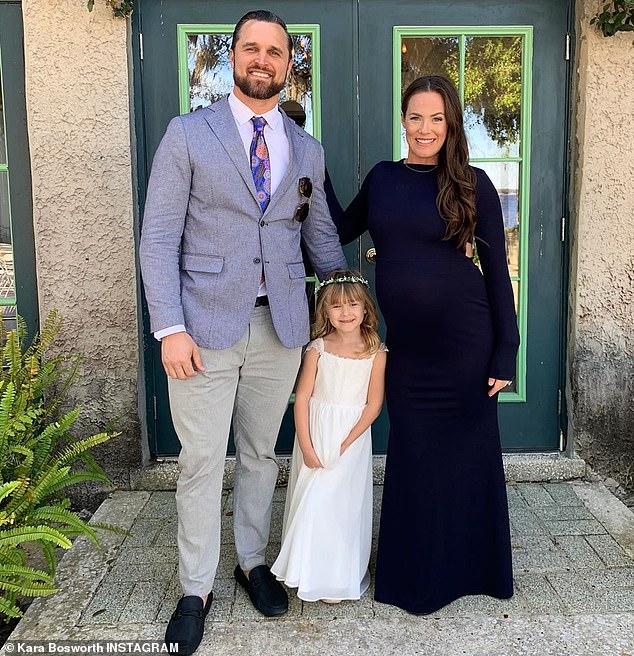 Bosworth shared more heartbreaking news on Saturday when she revealed that her father Matt Keough had died.

The former Major League Baseball player passed away on Friday, only weeks after McCoy’s passing.

‘Daddy, please take care of my son,’ she wrote. ‘Teach him the circle changeup and how to find forever friends. You’re on grandpa duty in heaven now.’ 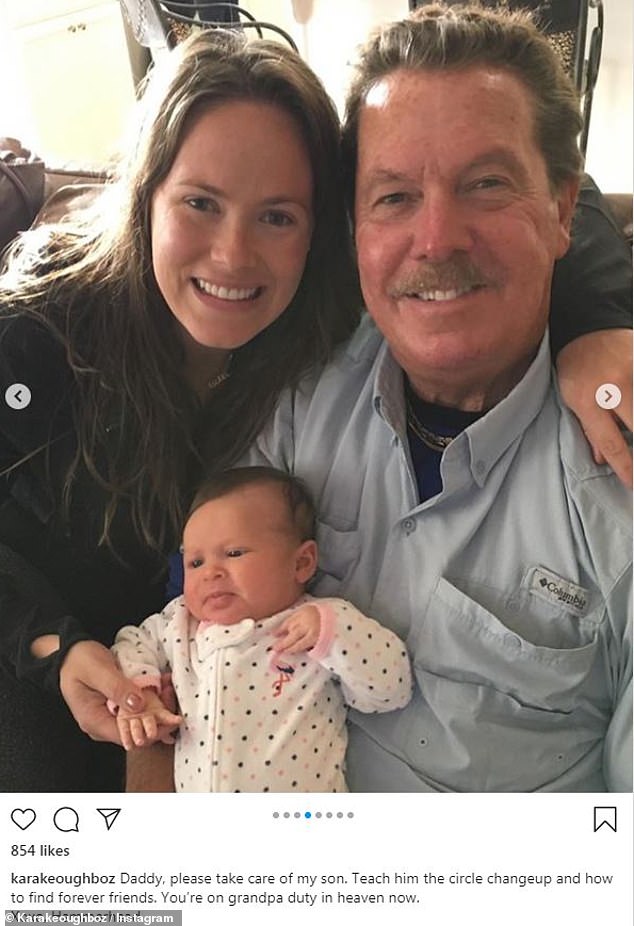 Tragedy upon tragedy: Kara revealed Saturday that her father Matt Keough died Friday at the age of 64, only weeks after her son McCoy died in childbirth; he is seen with her oldest child, daughter Decker

One of the photos featured Kara and her father beaming ear-to-ear as he held her first daughter Decker, now four.

Another sweet black and white shot featured the proud grandfather looking cool in sunglasses while posing with Decker, who looked like a chef in training with her floppy hat and apron.

An older photo showed the pro ball player walking an angelic Kara down the aisle as she married NFL star Kyle Bosworth. 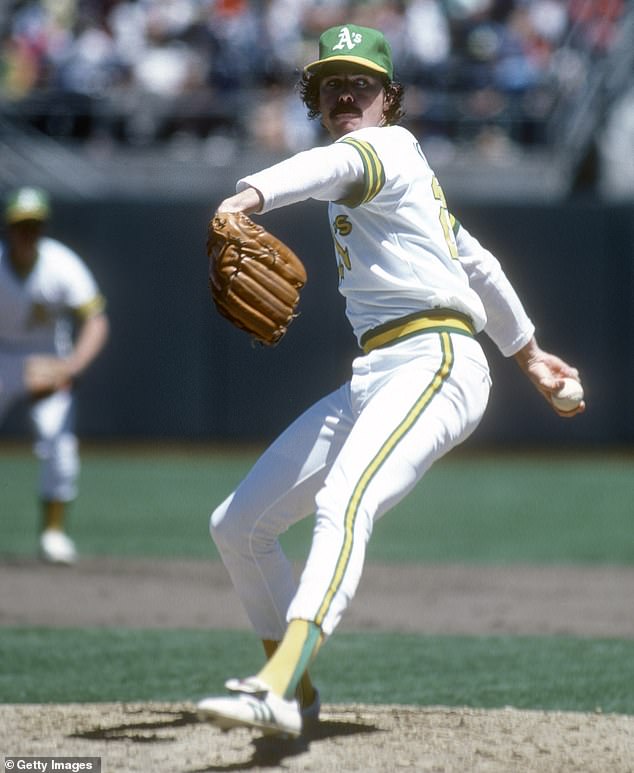 Ball player: Matt was best known for playing six years for the Oakland Athletics in the late-1970s and early-’80s as a right-handed pitcher. The team announced his death on Saturday; shown in 1981 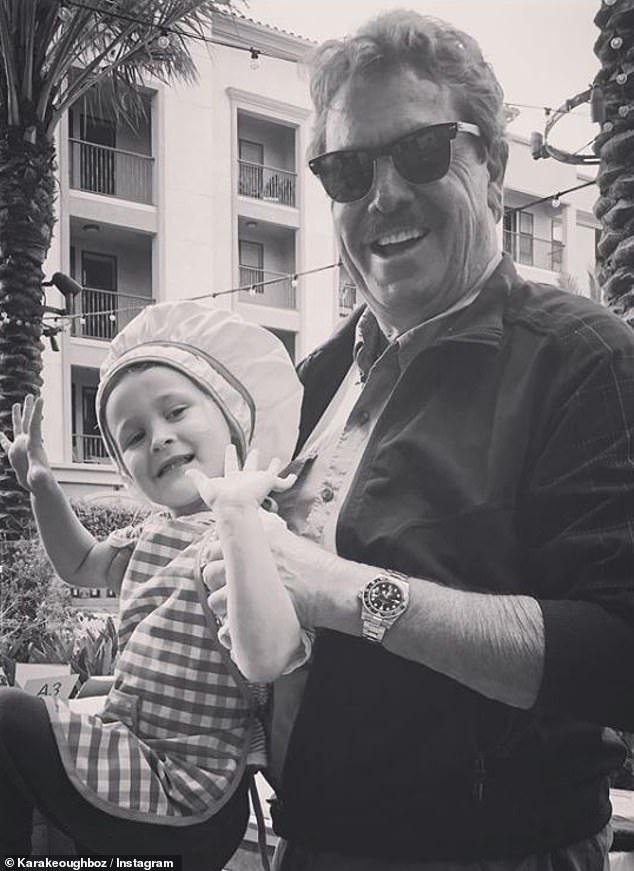 Heartbreaking: ‘Daddy, please take care of my son,’ she wrote. ‘Teach him the circle changeup and how to find forever friends. You’re on grandpa duty in heaven now’

One photo featured Matt and his wife Jeana Keough looking rugged in vests while posing with Kara and her brothers Shane and Colton Keough.

A final image showed Kara in the late-1980s when she was only a baby, as her father proudly sat her on his knees.

Matt was previously married to Kara’s mother Jeana from 1984 until filing for a separation in 2004. 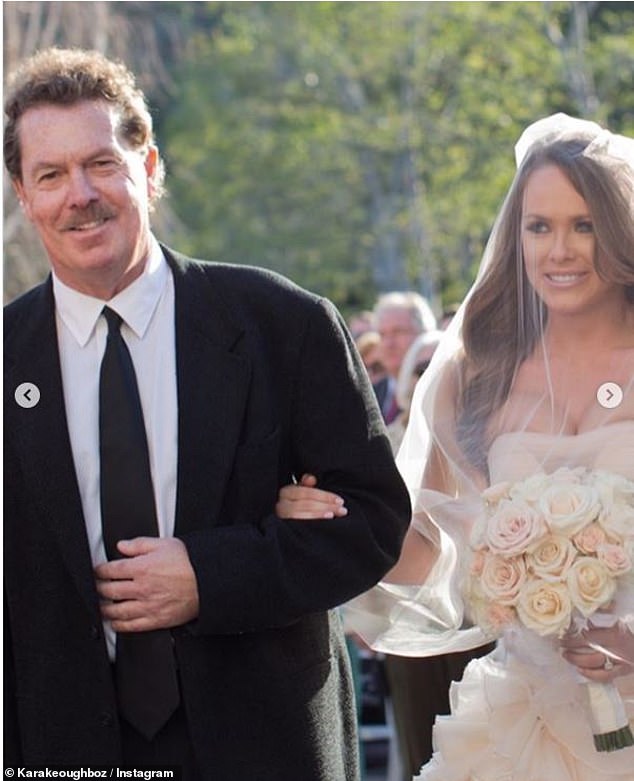 Memories: Kara shared multiple throwback photos of her father, including some of him playing with her daughter Decker, now four, and him walking her down the aisle as she married NFL star Kyle Bosworth 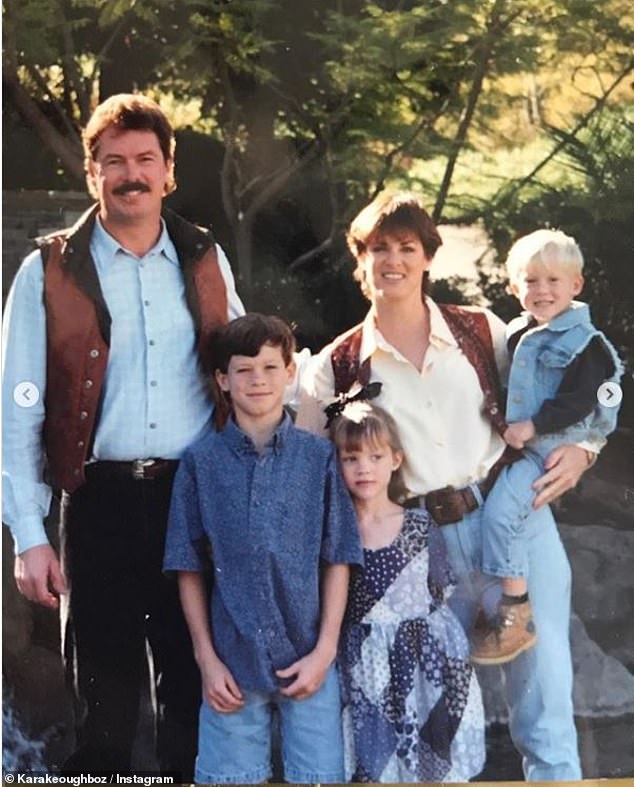 Old times: Matt was previously married to Kara’s mother Jeana Keough from 1984 until their 2004 separation. The divorce was finalized last year

Despite being legally separated from Jeana, Matt continued to live with her in the early RHOC seasons.

He was sentenced to a year in jail after getting a second DUI in 2010, and his ex appeared in court to plead for a probation sentence instead.

The reality star revealed that they finalized their divorce last year after more than a decade of delays. 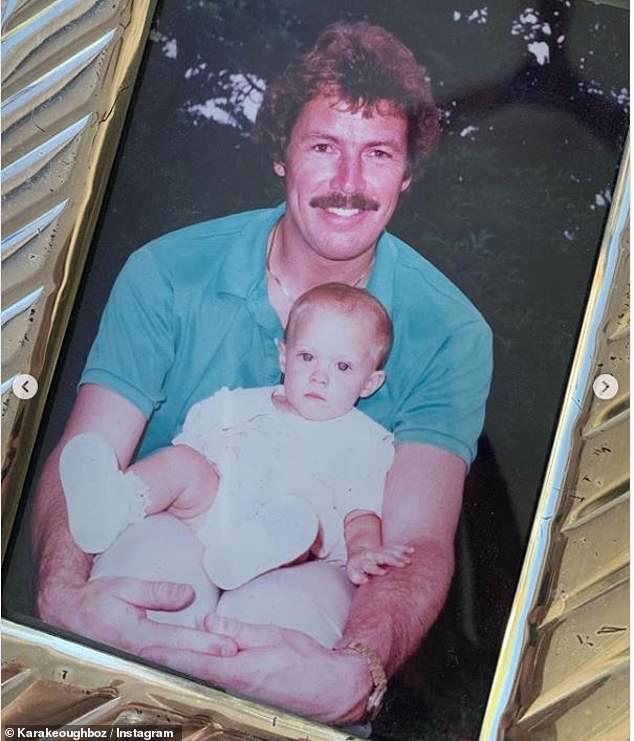 Tiny tot: One photo featured the former couple looking rugged in vests while posing with Kara and her brothers Shane and Colton Keough. A final image showed Kara in the late-1980s when she was only a baby

Matt was best known for playing six years for the Oakland Athletics in the late-1970s and early-’80s as a right-handed pitcher. The team announced his death on Saturday.

‘Matt was a great baseball man and a proud Oakland A,’ said Executive Vice President of baseball operations Billy Beane in a statement. ‘He had an incredible passion for the game and we were lucky to have him and his wealth of knowledge alongside us for the years he worked as a special assistant.’

Following his first run in Oakland, he had short stints with the St. Louis Cardinals, the New York Yankees and the Houston Astros, though injuries derailed his playing career in the late-’80s and early-1990s. 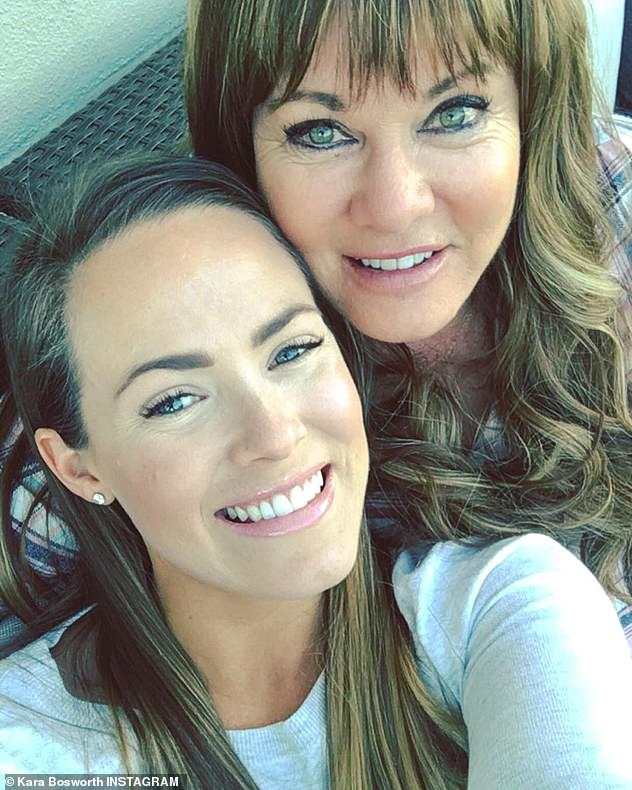 Reality star: Kara’s mother Jeana Keough was a cast member on The Real Housewives Of Orange Country from seasons one through five