“What an incredible achievement Emma! We will all be rooting for you tomorrow 🤞 Wishing you the best of luck! C,” she wrote. 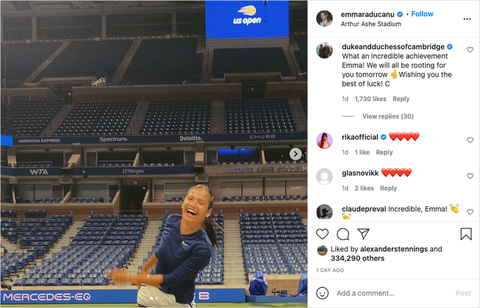 The Duke and Duchess of Cambridge’s social media posts are typically updates about their royal activities posted by their team on their behalf. This personal comment, the first ever from the Duchess, is similar to the sports-related musings that Prince William writes from time to time. The senior royal also signs his personal posts with his initial, W.

What an incredible achievement at this year’s #USOpen @EmmaRaducanu!

We will all be rooting for you tomorrow 🤞 Wishing you the best of luck! C https://t.co/ceO5TuUEyt

Raducanu and her Grand Slam opponent, 19-year-old Canadian Leylah Fernandez, will make history today when they play the first major final between two teens since the 1999 U.S. Open, when Serena Williams, 17, defeated Martina Hingis, 18. Raducanu is the the first British woman to earn a place a major singles final in 44 years. This year’s U.S. Open is the tennis player’s second major tournament appearance ever.

The London teenager told the BBC, “It obviously means a lot to be the first in the final for so long. Crazy, cool. To be here in New York for three weeks is just absolutely mind-blowing for me.”

She added, “Honestly, right now I’m just thinking of the game plan, how to execute. That’s what’s landed me in this situation. It hasn’t been focusing on who’s expected to win this match or that one. I think it’s just taking care of the day. That’s what I’m doing quite well at the moment.”