Emilio Vitolo’s relationship with Katie Holmes reportedly upset his mom: ‘She brought him up better than that’

Katie Holmes and her new boyfriend Emilio Vitolo Jr. have been nearly inseparable in recent weeks.

But one person seems particularly unhappy with their new relationship: Emilio’s mother Lourdes.

Sources close to the family say she was furious after the chef ended his previous engagement last month and moved on with the Batman Begins star, Page Six reports. 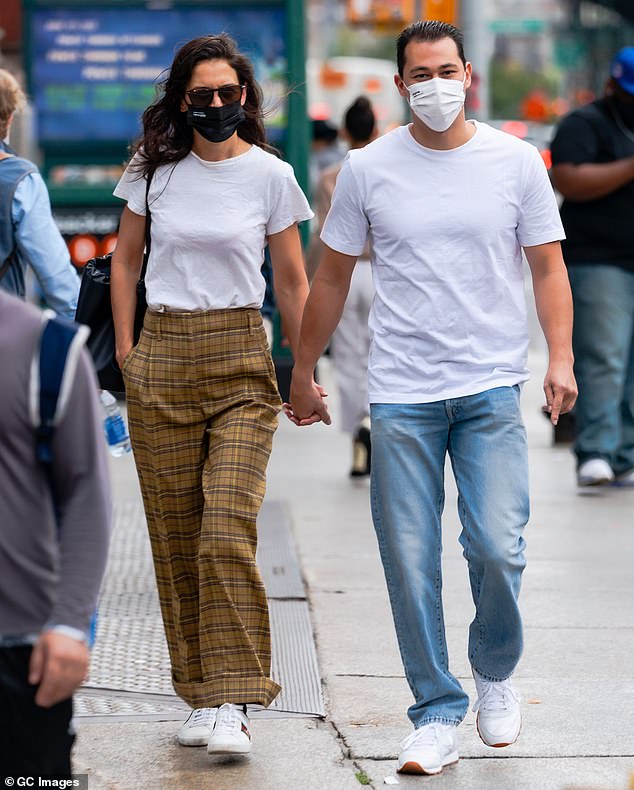 Not a fan: Katie Holmes’ new relationship with chef Emilio Vitolo Jr. has left his mother upset after he dumped his fiancée, Page Six reported on Saturday; shown together on Thursday

DailyMail.com confirmed exclusively on September 10 that Emilio, 33, broke off his previous engagement with his live-in fiancée Rachel Emmons, 24, via text when handsy photos of him and Holmes, 41, were first published.

The handbag designer, who had been engaged to the restaurateur for 18 months, was left shocked and scrambling and had to move back home.

‘[Lourdes] thinks she brought him up better than that,’ an insider said. ‘She didn’t like how [Emilio] handled this at all.’

However, another source painted a less rosy portrait of Vitolo and Emmons’ relationship. 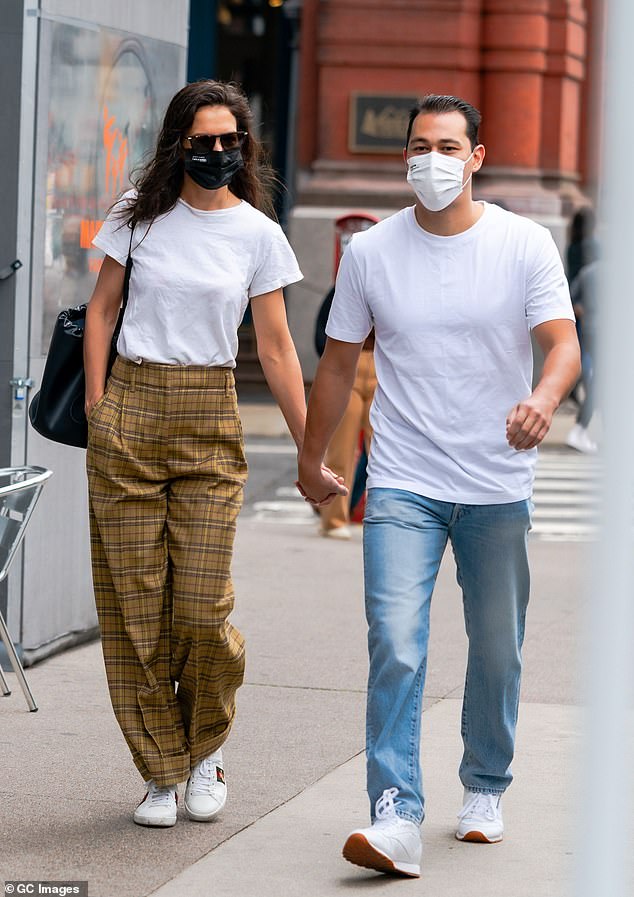 Moving fast: DailyMail.com confirmed exclusively on September 10 that Emilio, 33, broke off his engagement with his live-in fiancée Rachel Emmons, 24, via text when handsy photos of him and Holmes, 41, were first published; shown Thursday 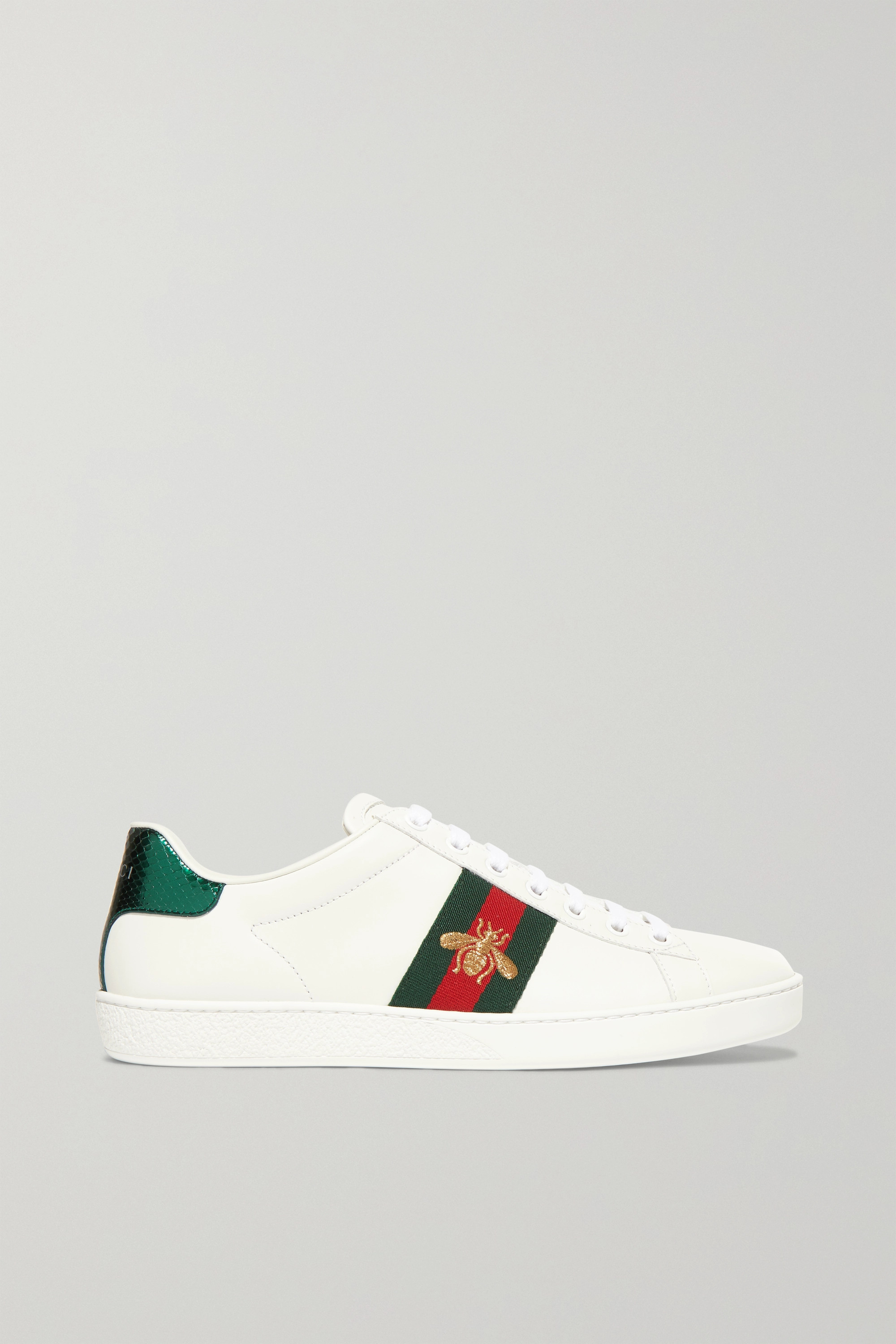 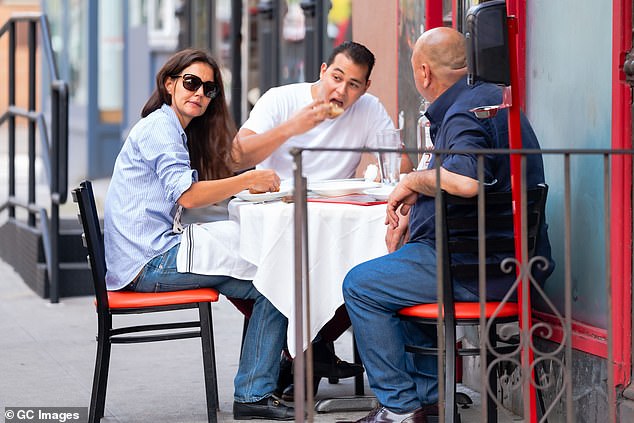 Disappointed: ‘[Lourdes] thinks she brought him up better than that,’ an insider said. ‘She didn’t like how [Emilio] handled this at all’

‘He and his fiancée were taking it slow, and it wasn’t working out,’ the source said.

According to them, someone like Katie is more his speed.

‘He likes older women,’ they continued. ‘He dated an older anchor at Fox, and others, so he has a history with older women.’

The same insider claimed that neither Katie nor Emilio have particularly sophisticated tastes, suggesting they could be a fit for each other.

‘So it could work out. They’re not, like, discussing books, or art or anything,’ they added.

Representatives for Katie and Emilio’s family couldn’t be reached for comment. 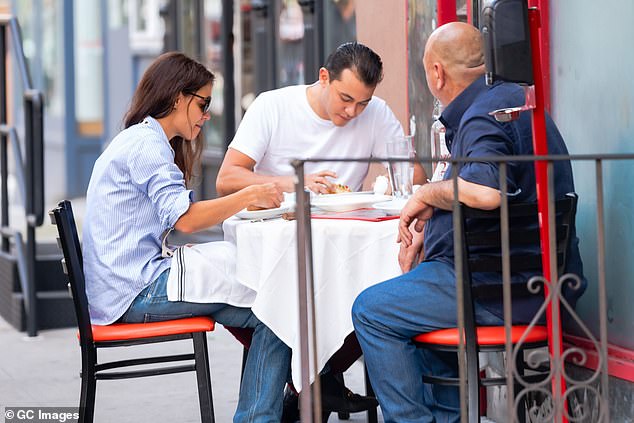 Not meant to be: But another source claimed ‘it wasn’t working out’ between Emilio and his fiancée. They also said he prefers older women, like Katie

The alleged disapproval from Emilio’s mother doesn’t seem to have dulled the new couple’s affection at all.

‘Emilio and Katie act like young teens in love when they are together,’ a source to Us Weekly on Sunday.

‘Emilio lights up when she enters his restaurant and they kiss and hug like they haven’t seen each other in forever, but really they see each other almost every day.’

The chef also seems to take every opportunity to show off his love.

‘Emilio is into Katie. Whenever he’s asked about her, he blushes and smiles,’ the insider continued. ‘They are always laughing when they’re together. It’s constant smiles and loving looks between them and Emilio’s friends more than approve of Katie. They think she’s so great for him.’

They also said that Emilio’s father had a positive reaction to the Batman Begins actress after first meeting her last month. 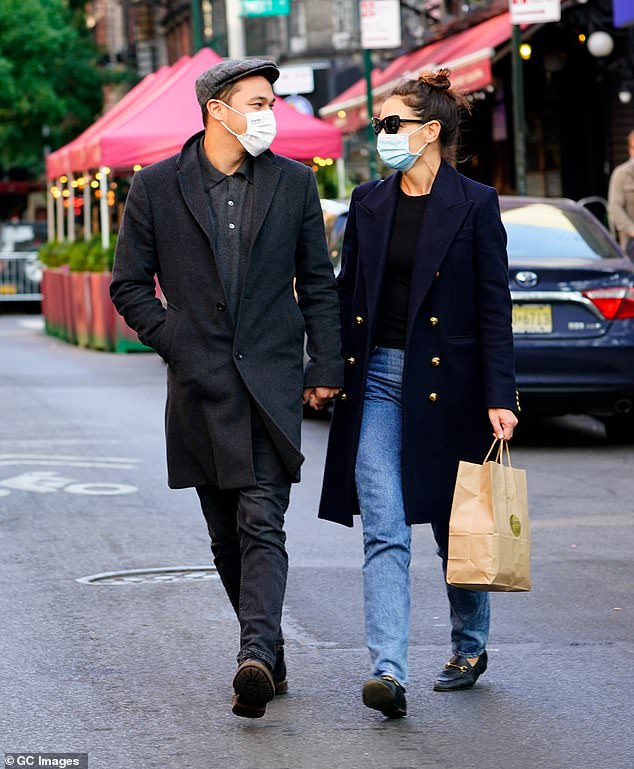 Smitten: ‘Emilio lights up when [Katie] enters his restaurant and they kiss and hug like they haven’t seen each other in forever, but really they see each other almost every day’ a source told Us Weekly; shown September 22

A source close to the situation recently dished to People that Katie is beyond ‘smitten’ with her new love and that she ‘keeps texting him all day long and he loves it.’

‘He can’t get enough of her attention,’ the source added.

The two often spend time at Emilio’s restaurant, Emilio’s Ballata, which is owned by his father, Emilio Vitolo Sr.,’ while the younger Emilio serves as the chef.

His father is known for occupying a table close to the door and determining what table people will be seated at and in what order.

Despite the insular style, plenty of celebrities have been drawn to the restaurant’s classic Italian dishes, including former President Barack Obama and Hollywood stars Tom Hanks and Bradley Cooper. 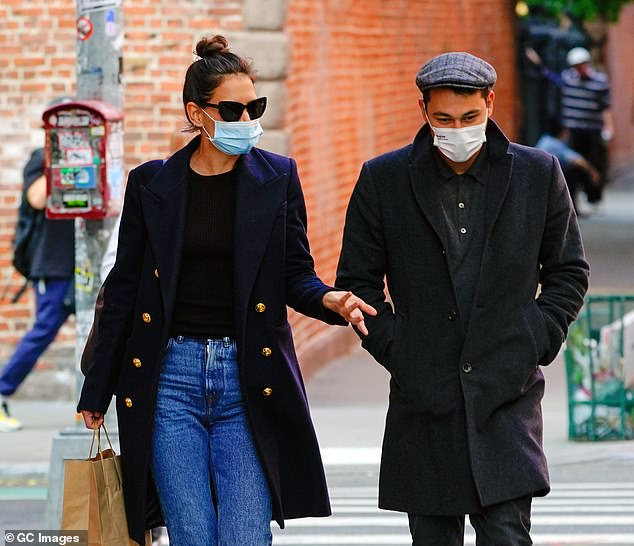 Similar interests: The same insider claimed that neither Katie nor Emilio had particularly sophisticated tastes, suggesting they could be a fit for each other

Emilio and his actress girlfriend were first linked on September 1, while on an apparent date at the Mediterranean restaurant Antique Garage in Manhattan’s SoHo neighborhood.

But the romantic nature of their relationship was unveiled later that week, when they were spotted kissing passionately at Manhattan’s Peasant Restaurant.

The relationship seems to be a drastic change from Katie’s previous MO, as she’s been unabashedly open about her new beau.

In contrast, she began dating fellow actor Jamie Foxx, 52, in 2013, but the two kept their relationship private for years until going public at the Met Gala in May 2019, shortly before they broke up. 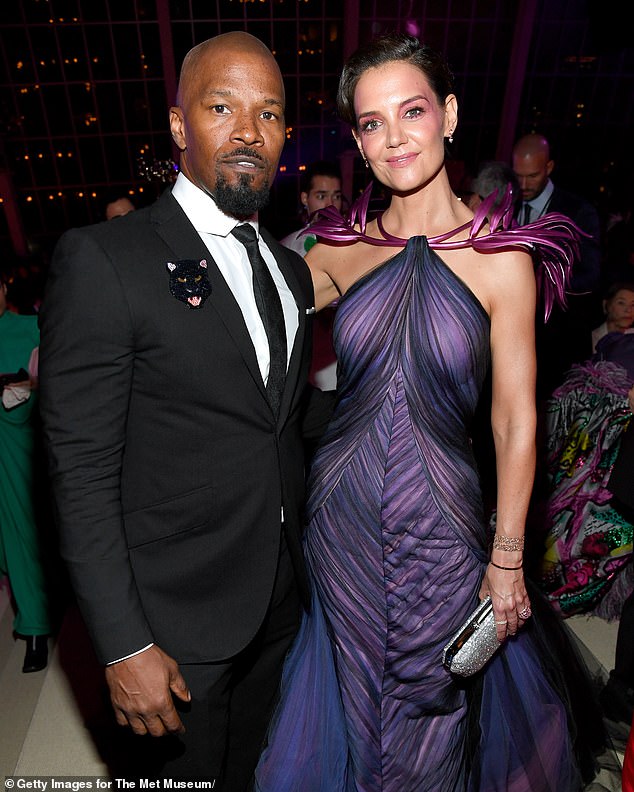 Moving on: Katie previously secretly dated Jamie Foxx in 2013, following her 2012 divorce, but they split in 2019 shortly after going public as a couple; shown in May 2019

Prior to coupling up with Foxx, Holmes was married to Hollywood icon Tom Cruise.

The couple began their whirlwind courtship in 2005 and were married in seven weeks.

Katie filed for divorce in 2012, which was finalized after only ten days.

She and Cruise had welcomed their daughter Suri in 2006, who now spends her time with Katie, who has primary custody. 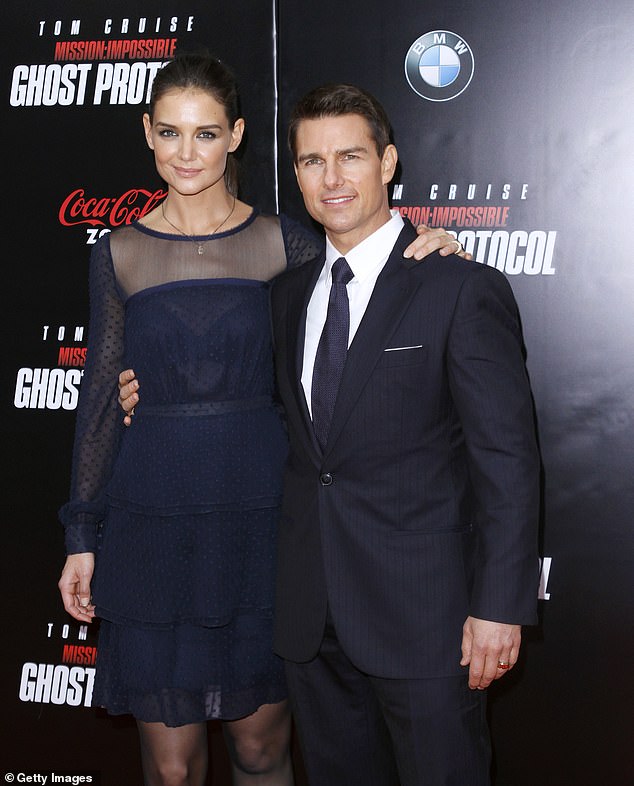