Katie Thurston Splits from Blake Moynes, Surprises Absolutely No One 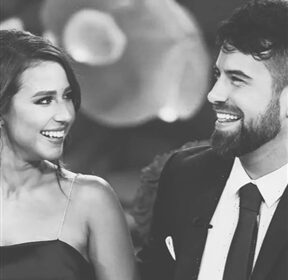 You may not believe this, but:

Katie Thurston and Blake Moynes have ended their engagement.

Wait, what’s that? You totally believe it? Because almost no relationship that starts on The Bachelor or The Bachelorette ever really lasts due to the scripted and/orr highly-produced nature of these programs?

Even by the low bar set by past couples who agreed to marry on one of these finales, however, Katie and Blake broke up pretty darn quickly.

The latter proposed to the former just three months ago — that’s when it aired, at least.

“It is with mutual love and respect that we have decided to go our separate ways,” Thurston wrote on Instagram on Mondsy, adding:

“We are so grateful for the moments we shared together and the entire journey that has unfolded this year, but we ultimately have concluded that we are not compatible as life partners, and it is the most caring choice for both of us to move forward independently.”

“We ask for kindness and privacy as we both navigate this transition.

“Both of us will forever want the best for one another and ask you to please support us in our decision.”

There hasn’t been any rumors of cheating or even of tension between Thurston and Moynes prior to this announcement.

Just ahead of the break-up, though, Thurston did write how she was “totally winging it” as one half of a long-distance couple.

While Katie moved to San Diego following her Bachelorette journey, Blake remained in Canada … and his job brought him all over the world, including a recent trip to Africa.

That’s quite a challenge for any boyfriend and girlfriend to overcome.

Let alone two people who had never even been together away from The Bachelorette set before.

“We’re figuring it out,” Thurston told Us Weekly on Friday about making her romance work while Moynes was traveling.

“We don’t know. This is very new to us still. I’m just focusing on myself, he’s focusing on him, and if we work doing that, great.”

Alas, it clearly did not work.

Despite what Moynes said to Thurston on her final episode this summer.

“In the moment — because there was a moment where I didn’t think he was proposing — I was just happy to leave with him.

“I knew that was going to happen no matter what, [but] it’s hard to say the impact of that in the real world [if he didn’t propose],” Thurston told the aforementioned tabloid during a joint interview with her now-former fiance after the proposal aired.

“I didn’t come here to find a boyfriend. I can do that on a dating app.”

Katie Thurston is headed your way!

Moynes, for his part, has not yet commented on the split.