Khloe Kardashian shares glammed up selfie as she hangs with Rob

Khloe Kardashian was a vision of glamour as she enjoyed some quality time with her brother Rob Kardashian.

The reality star, 37, posted a snap of herself looking her absolute best as she hung out with her brother in a selfie posted Thursday.

Rob’s face remained out of view as Khloe gazed towards the camera, pouting her lips and showing off a perfect polish of makeup. 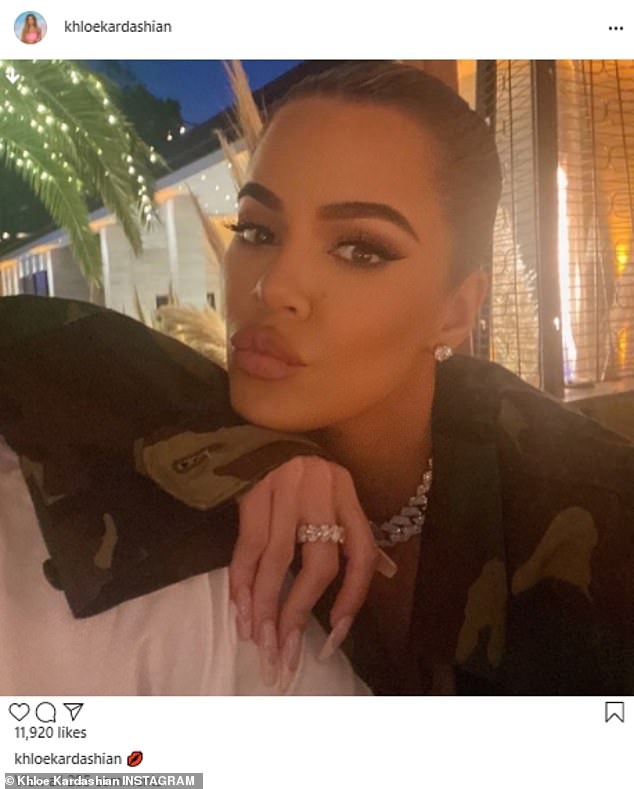 Picture perfect: Khloe Kardashian was a vision of glamour as she enjoyed some quality time with her brother Rob Kardashian

The reality star rested her arm upon her brother’s shoulder as she displayed her fabulous, claw-like French manicure.

She wore a camouflage print top, dazzling chain choker necklace, and a sleeked back hairstyle.

A string of lights illuminated a nearby palm trees while Khloe stayed warm beside a patio heater, appearing as though they may have been at a restaurant.

Khloe captioned the snap with a simple lip print emoji.

Backlash: Khloe was recently slammed for saying she ‘can’t stand’ people who complain about being ‘fat’ in past body shaming interview going viral on TikTok (Pictured above, in 2019)

There was no mention of the recent controversy she found herself embroiled in after ‘fatphobic’ comments she made in a 2019 interview resurfaced and went viral on TikTok.

The clip sees the KUWTK star talking about her frustration over people saying they want to lose weight when, at the same time, are still indulging in sugary foods like ice cream.

Khloe says: ‘I can’t stand people that are like eating a bucket of Häagen-Dazs ice cream, [saying] “I’m so fat!”‘

She made the comments just two years ago when appearing on British media personality Jay Shetty’s podcast, which has caused a backlash from fans online, with many posting the clip to TikTok to include their own outraged reactions.

‘I’m like well, you’re always going to be in this victimized state because you’re literally not doing any, you’re not being self-aware. You’re not even looking at your own reflection, saying, “Okay, what can I do to change things about myself?” It’s everybody else’s fault,’ she finished.

One angry TikTok user hit back, comparing Khloe to a Barbie doll, saying: ‘Honey, you are made in China, you are manufactured. You got more plastic in you than the ocean does currently, no ma’am.’ 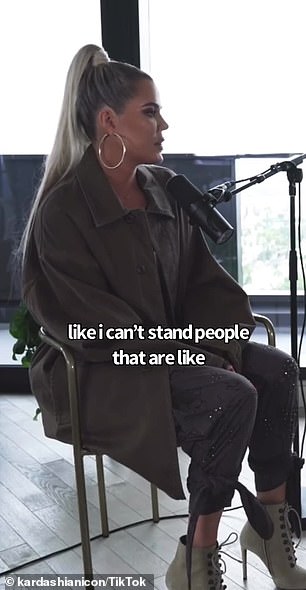 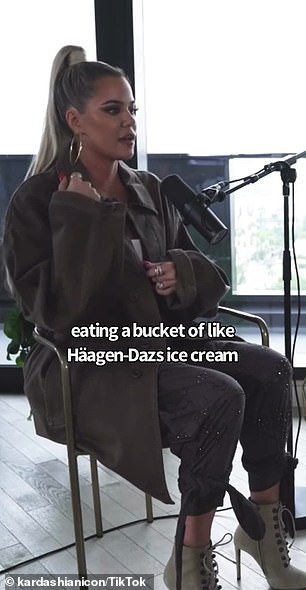 Upset: Khloe says: ‘I can’t stand people that are like eating a bucket of Häagen-Dazs ice cream, [saying] “I’m so fat!”‘ 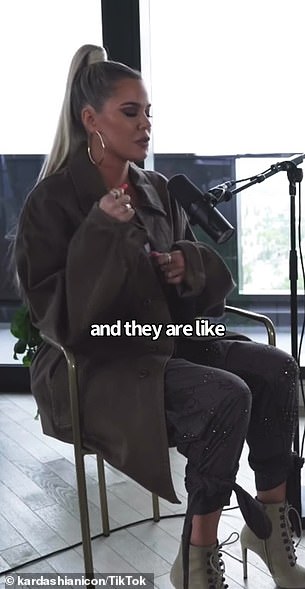 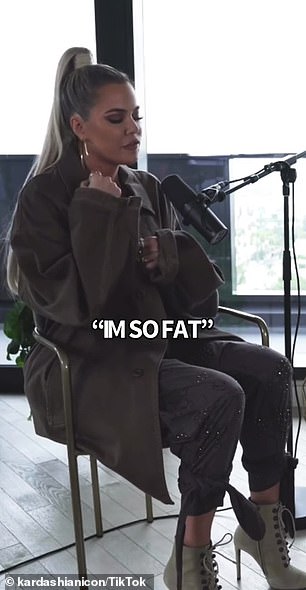 The user, named Divazzzzzzzzz, added: ‘Humble thyself, and remember where thyself came from. What journey did you go on? Other than to the plastic surgeon. Don’t do that, absolutely do not do that. Get your life together. This video was not it. Try again.’

Another fan took to Twitter to write: ‘Khloe Kardashian is really saying this with her whole chest as if she doesn’t have personal trainers and plastic surgeons sculpting her body for her. Throwback to when she used to be the likeable sister.’

This prompted replies such as: ‘Because it’s just that easy right? She was the fat sister once and so was/is her brother. Be considerate of those with eating disorders and mental health issues. Let fat people eat their icecream in peace’ 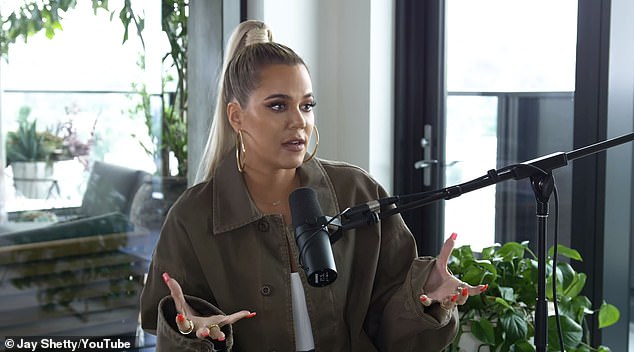 Telling it straight: Khloe appeared to be in an unfiltered mood during the podcast 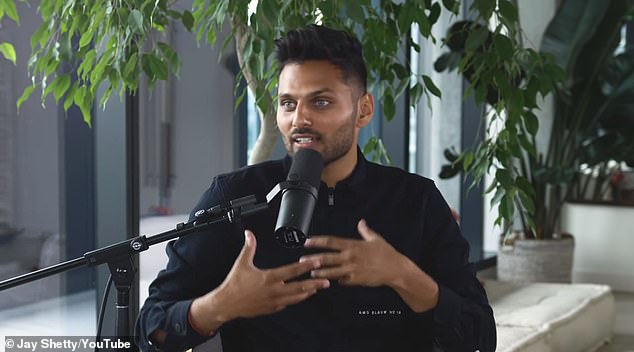 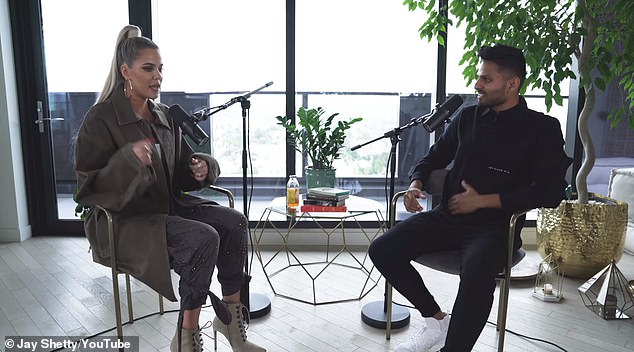 Laying it on thick: Some critics found Khloe’s comments to be slightly unkind 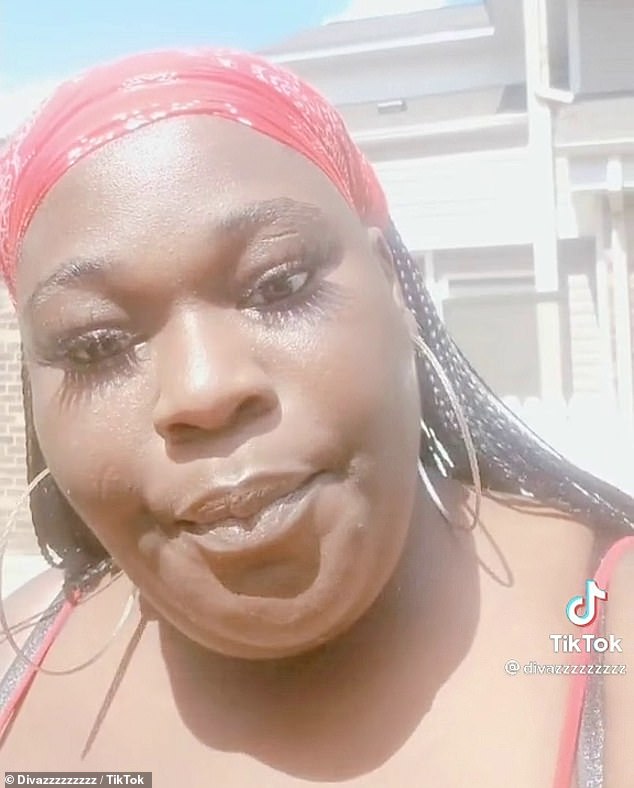 Hitting back: TikTok user Divazzzzzzzzz, said, ‘Humble thyself, and remember where thyself came from. What journey did you go on? Other than to the plastic surgeon.’

Another raged: ‘She bought a whole new body and now acts like this?! I used to love her so much because she wasn’t like her sisters. But honestly f*** her. I went through an ED for 15 years because people said s*** like this to me and now I’m sick from it. I hope she realizes what she said.’

Khloe often talks about her health and fitness regime, and proudly revealed that she lost 60lbs after giving birth thanks to exercising regularly.

She also fronted her own weight loss and makeover show, Revenge Body with Khloé Kardashian, on E! in 2017.

In April this year, Khloe talked about an unedited bikini photo of herself that she wanted to be removed from the Internet because she didn’t find it flattering.

“This is me and my body unretouched and unfiltered,” she said in an Instagram Live, addressing the controversy a few days later.

‘The photo that was posted this week is beautiful. But as someone who has struggled with body image her whole life, when some takes a photo of you that isn’t flattering in bad lighting or doesn’t capture your body the way it is after working so hard to get to this point — and then shares it with the world — you should have every right to ask for it to not be shared — regardless of who you are.’