Kim Kardashian gets her custom Balenciaga cape STEPPED ON at Nobu

She’s used to being front and center when she steps out.

After dining at Nobu Malibu with mom Kris Jenner and partner Corey Gamble, the billionaire had her dramatic cape stepped on by an adorable kid who stole the show. 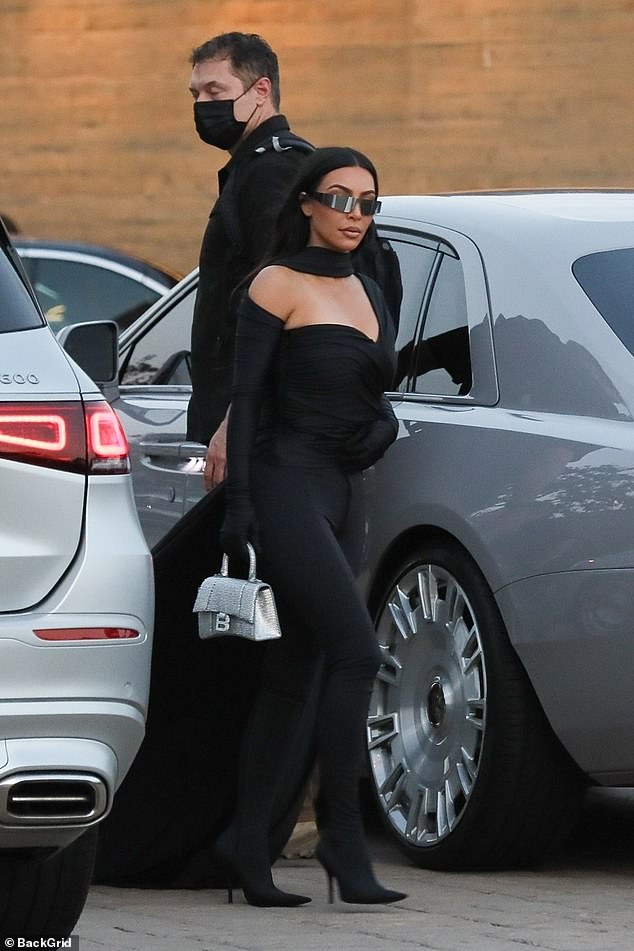 Making an entrance!The 40-year-old billionaire reality star stepped out for pal Jeff Leatham’s 50th birthday at Nobu Malibu wearing a dramatic custom Balenciaga outfit that ended up getting stepped on by an adorable kid

Kim’s look for the evening included custom black ‘pantashoes’ that were heeled and a one shouldered silky black shirt with attached gloves that exposed a bit of cleavage.

The edgy top was attached to a very dramatic cape that trailed on the ground behind her, and she was seen adding an additional ‘matrix-like’ flare with a pair of black sunglasses.

For a splash of glitz she toted a silver sparkly Balenciaga handle bag and she kept with the sleek look by wearing her long brown tresses straight.

Her outfit was in the same vein as one of the spandex bodysuit outfits fashioned for her to wear to estranged husband Kanye West’s Atlanta listening show. 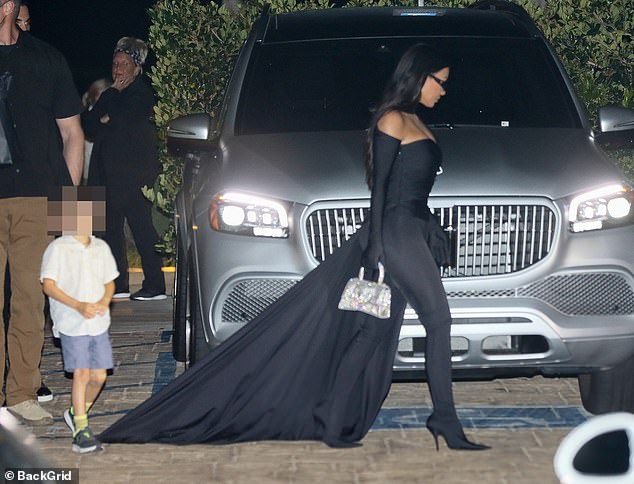 Blissfully unaware: As a kid walking behind her stepped on her cape she appeared not to notice at first 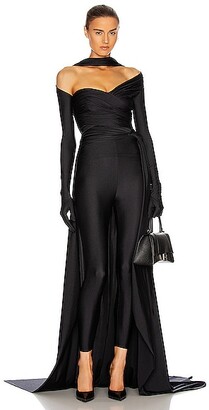 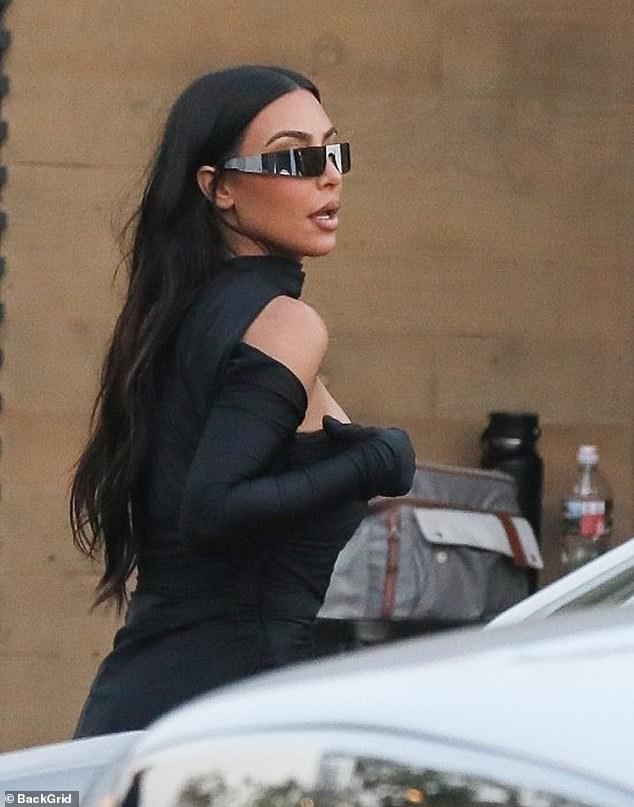 Adjustments: Kim was seen adjusting her very couture look before heading in a VIP entrance 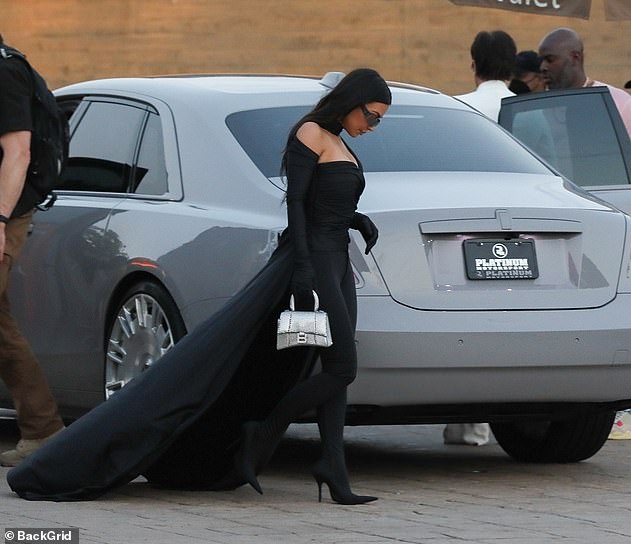 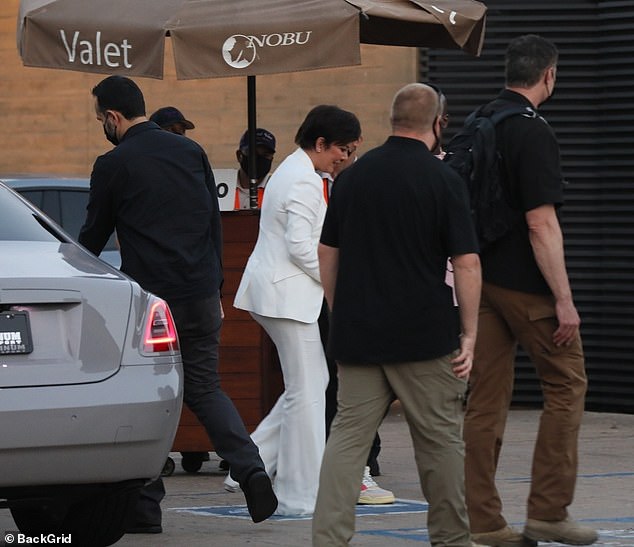 Standing out: The momager was seen at the party in an all white pantsuit just hours after youngest daughter Kylie Jenner confirmed her second pregnancy 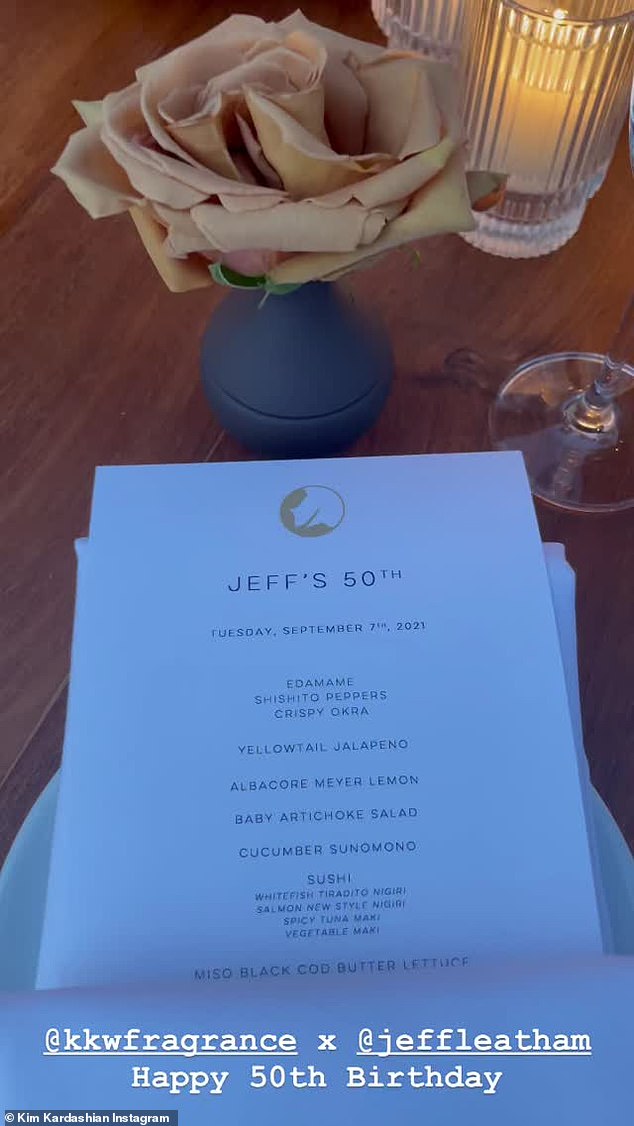 Details: The SKIMS founder took to social media to show off details for the event which included a prefixed menu of the upscale sushi joint’s most famed delicacies 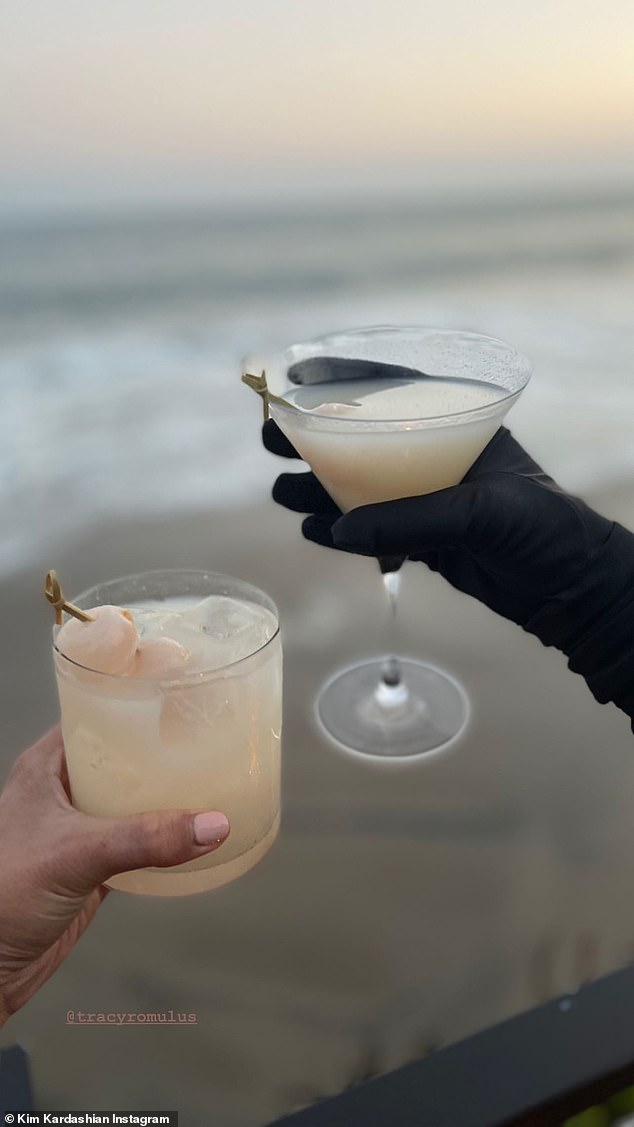 Drinks with a view: Kim also flashed a look at her lychee martini while staring out at the ocean with pal Tracy Romulus

Kim exited a Rolls Royce alongside mom Kris who wore a white pant suit, and her partner Corey. Naturally the high profile trio was accompanied by a hefty amount of security.

Once inside the SKIMS founder took to social media to show off details for the event which included a prefixed menu of the upscale sushi joint’s most famed delicacies, including miso black cod, and two types of sashimi.

She gave her followers another look at her gloves and beachside dining view while sipping on a lychee martini.

But upon exiting Kim had her moment overshadowed by a sweet kid who trailed behind her and accidentally stepped on her very long cape. 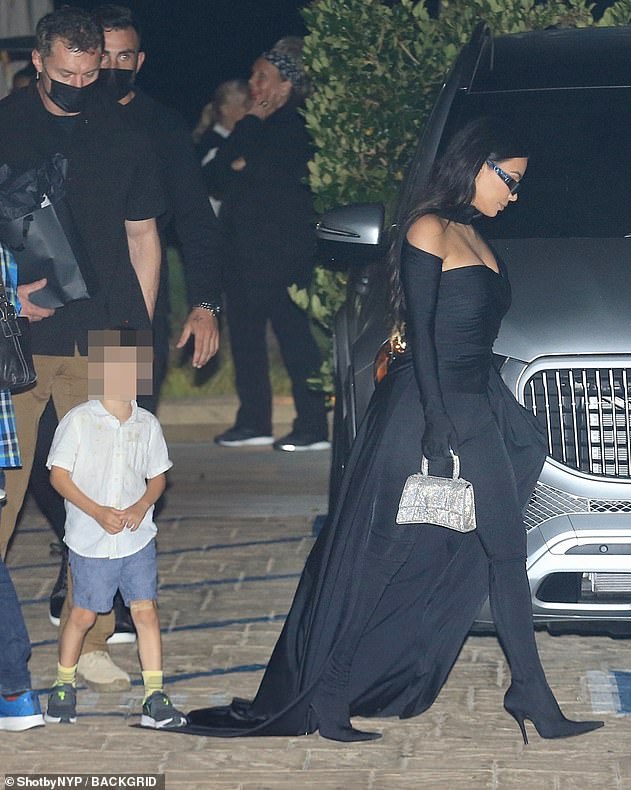 Whoops! The unknowing kid was no match for Kim’s very long cape that got in the way of his footing 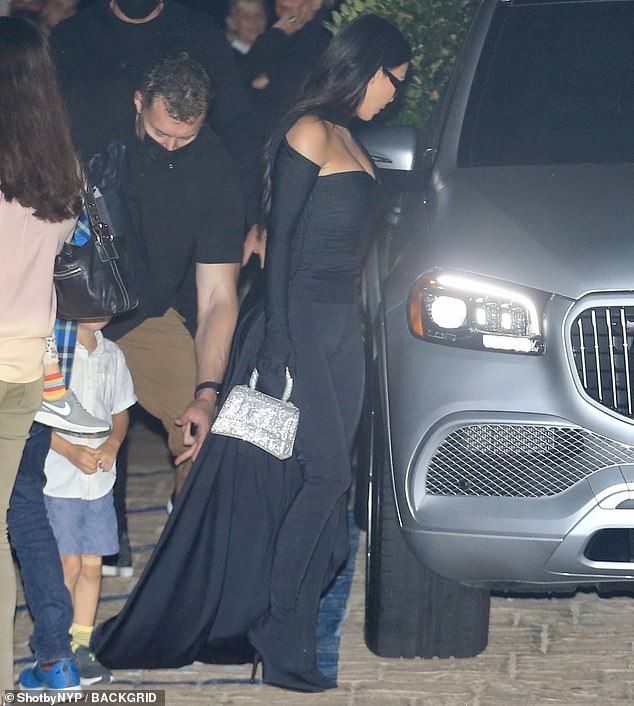 A little help: Security was there to help her out with her fashion setback as she turned around

Though the KKW Beauty founder seemed not to notice at first, her arsenal of security was pictured aiding her in the situation before Kim got wind.

And once back home she seemed to want to get more wear out of the outfit as she strutted through the halls of her $60M Hidden Hills home and giggled in a few videos.

Later she shared a close up look at her glam for the night as she plugged her line of products including her KKW Fragrances. 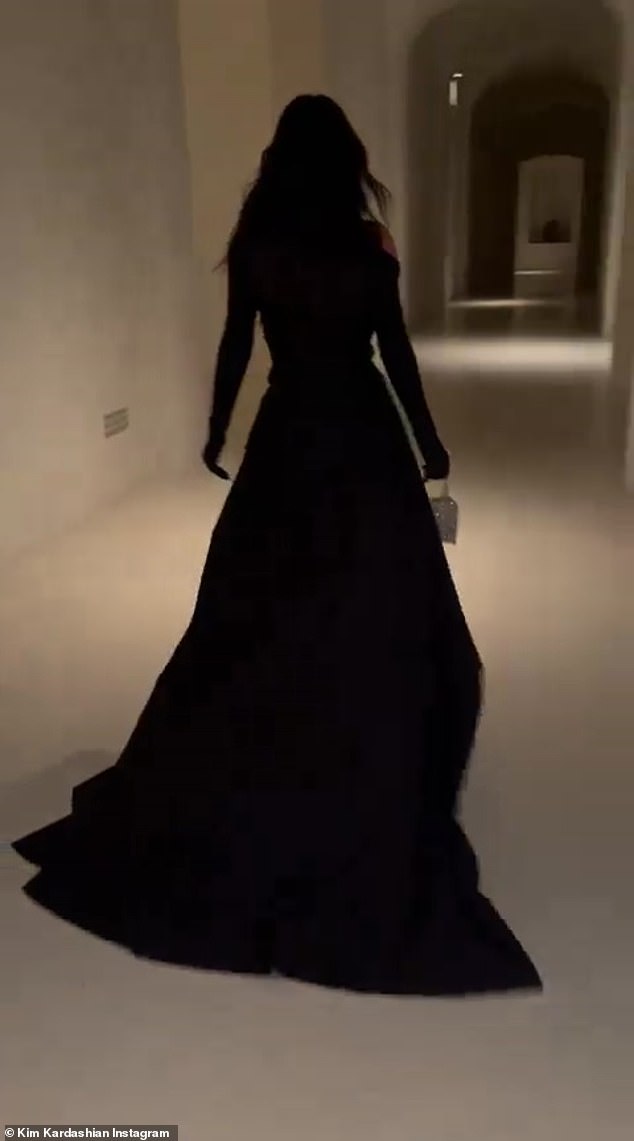 Strutting her stuff: Back home she was seen walking through the halls of her palatial Hidden Hills home with the cape still intact 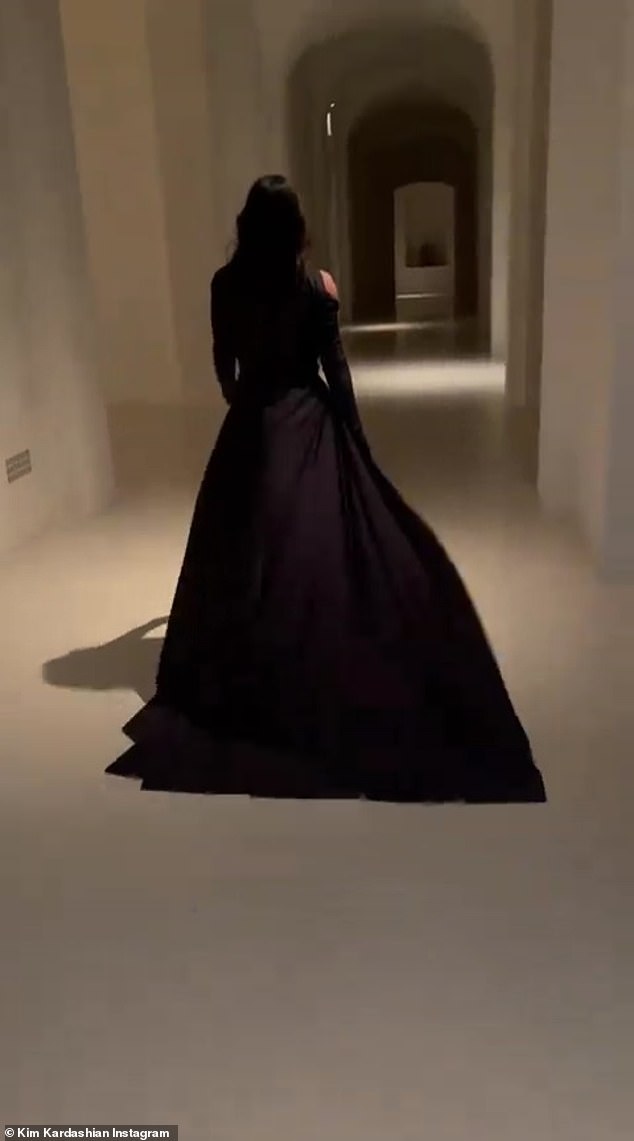 Matrix? The mother of four looked straight out of The Matrix with her look

Night out: The busy mother of four was seen letting loose at home 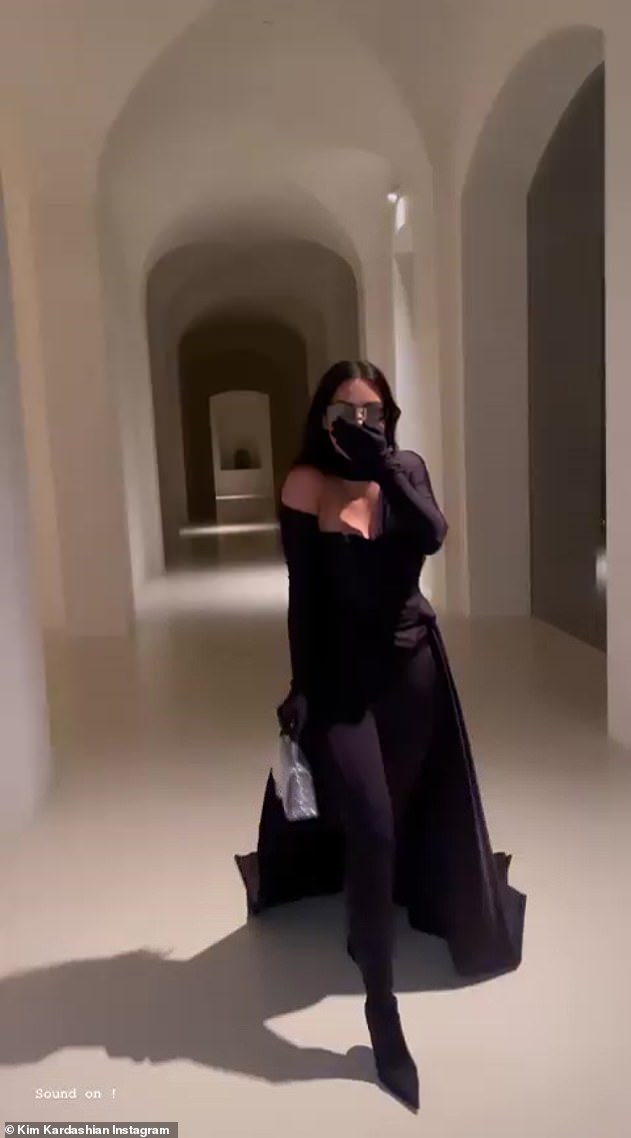 Feeling silly! She posted a video of herself giggling while taking to her minimalistic house like a runway

The outing comes on the same day that younger half sister Kylie Jenner confirmed that she was expecting her second child with baby daddy Travis Scott.

Upon seeing the social media announcement which came in the form of an intimate video, Kim wrote ‘Crying!!!!’ in the comment section.

It had been reported that the Kylie Cosmetics founder was expecting in August after Caitlyn Jenner appeared to leak that she was expecting another grandchild.

PEOPLE sources said that Jenner had a ‘cute bump’ and was ‘a few months along’ and Us Weekly said the pair had been trying for ‘almost a year,’ to have another baby before they got their exciting news. 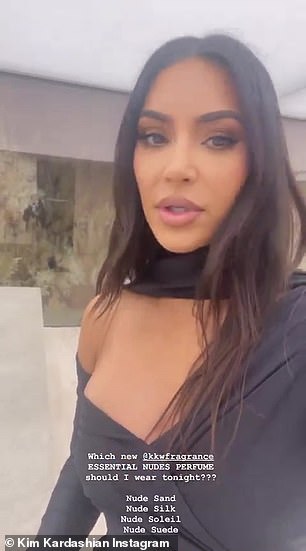 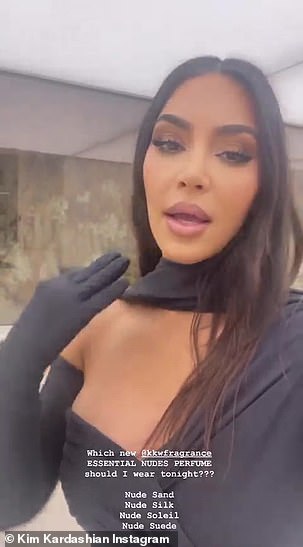 Freshening up: The reality star asked her followers to give input on which of her fragrances she should wear 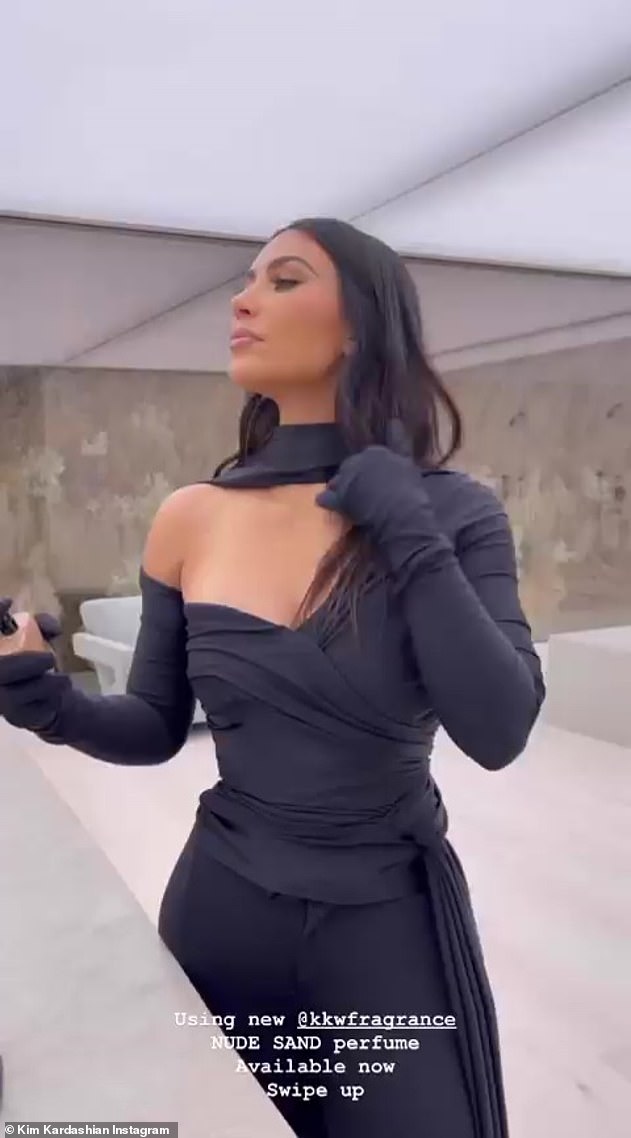 Little spritz: In her bathroom she then sprayed herself down in her nude sand fragrance