His newest album Jesus Is King was originally slated for released a year ago, but it looks like Kanye West may finally let it see the light of day.

Kim Kardashian, 38, shared stirring video to her Instagram Stories on Friday featuring Kanye West, 42, and their eldest daughter North, six, getting into the spirit to sing music from the gospel-inflected album for a performance in Detroit, Michigan.

The rapper is rumored to be releasing his album Friday night during a later performance in Detroit, though the album drop has yet to be confirmed. 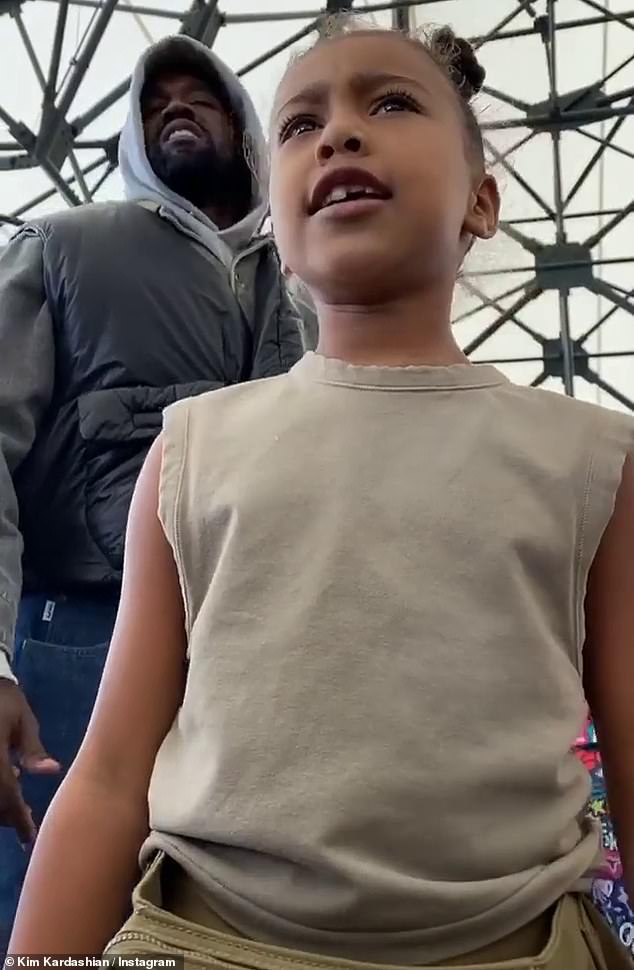 Holy Spirit: Kim Kardashian, 38, shared video to Instagram on Friday of Kanye West, 42, and their eldest daughter North, six, getting into the spirit for Sunday Service in Detroit, Michigan

Kim was seated on-stage near the organ, which gave her an ideal view of her husband and daughter.

Kanye was dressed in layers, wearing a puffy black vest atop a weather denim jacket, which he wore over a gray hoodie.

The Jesus Walks rapper paired the items with a pair of blue dad jeans. 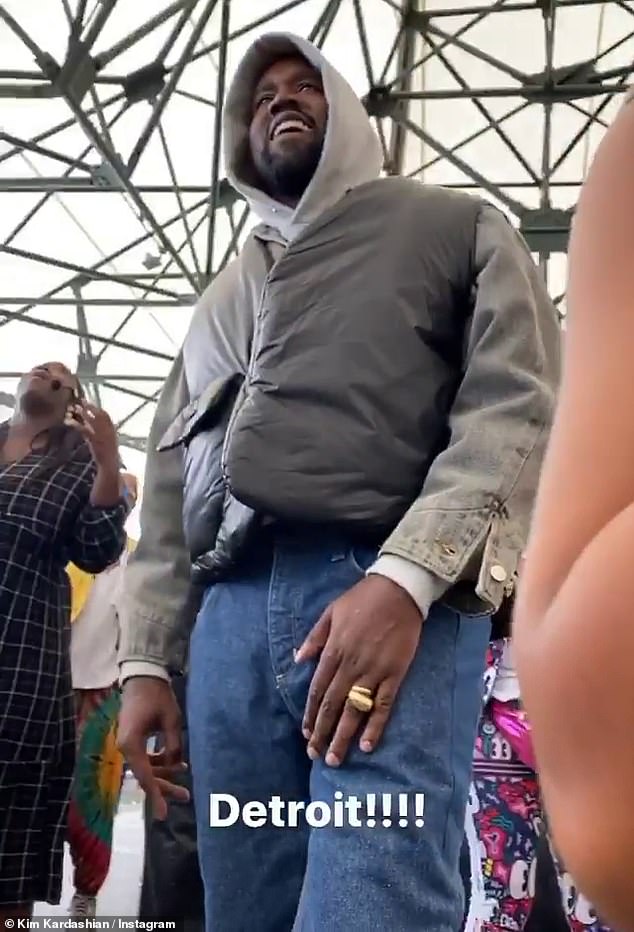 Yeezus: Kim was seated on stage near the organ. She recorded Kanye singing while wearing layers of a gray hoodie, weathered denim jacket and puffy black vest with dad jeans 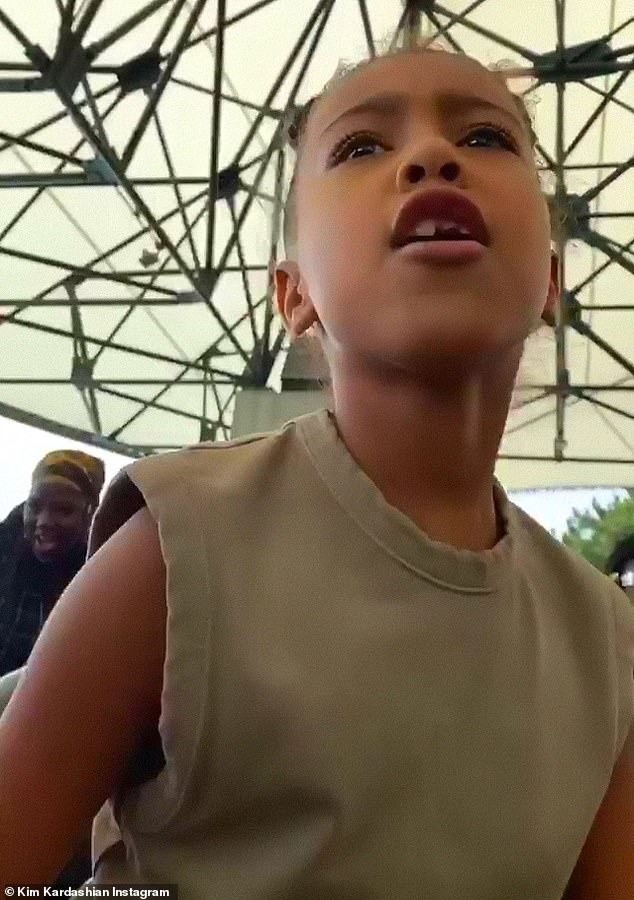 No distractions: North was dressed in her dad’s preferred neutral colors with a sleeveless beige top, khaki pants and an olive hip sack 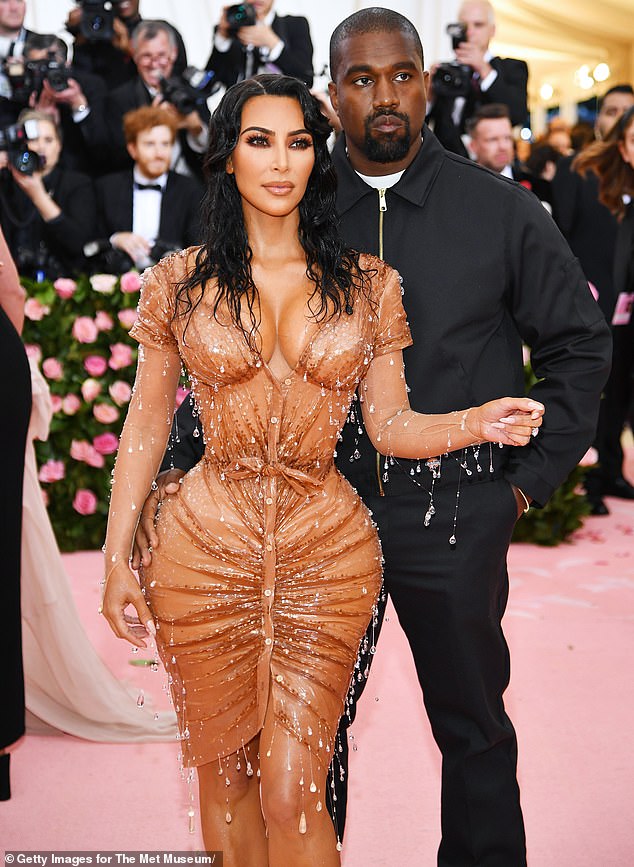 Information sharer: Kim shared video of the warm-up Sunday Service performance, and she’s doled out details on Kanye’s album Jesus Is King, which may be dropping later Friday night; pictured in May

North was dressed in her dad’s preferred performance uniform with a sleeveless beige top and khaki pants.

She accessorized with an olive-colored hip sack and had her natural curly locks done up in bows.

The daughter of Kim and Kanye looked entranced by the music as she sang in closeup with her dad and the rest of the choir just behind her.

According to the Detroit Free Press, the on-stage choir was comprised of singers bused in from the rapper’s hometown of Chicago.

The performance was expanded further with around 2,000 Detroit-based singers who were strategically placed throughout the audience to create an enveloping sound. 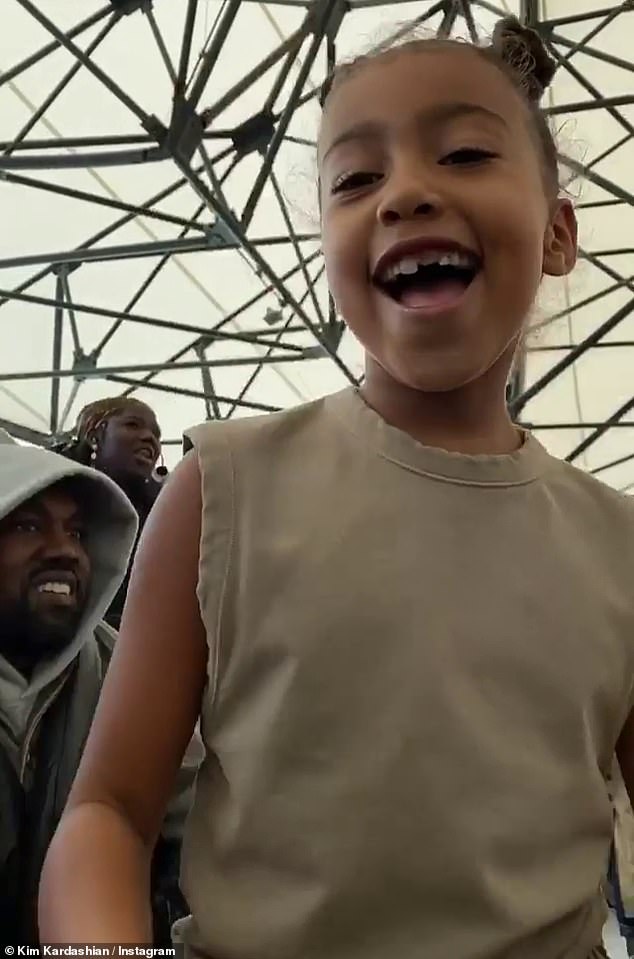 Feeling it: The daughter of Kim and Kanye looked entranced by the music as she sang in closeup with her dad and the rest of the choir just behind her 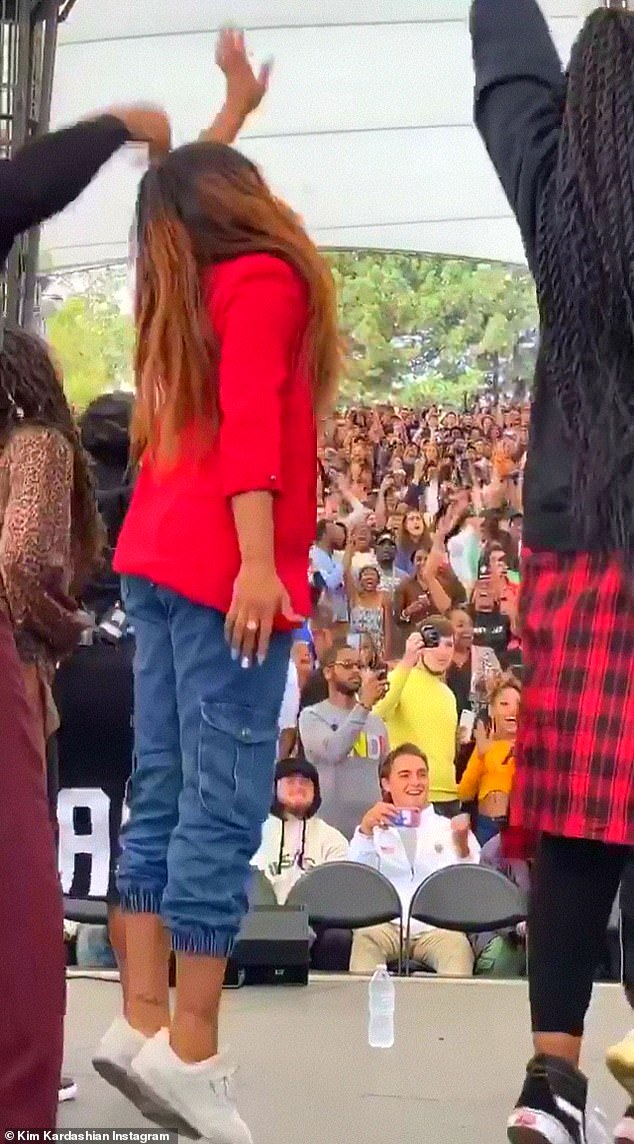 Wall of sound: Kim caught choir members from Kanye’s hometown of Chicago on stage, while around 2,000 Detroit-based singers sang from inside the crowd

Though the Keeping Up With The Kardashians star mostly focused on her family on stage, she did pan her camera occasionally to capture the audience, which looked totally engaged with the tunes.

The music performed included a variety of standard religious songs, as well as arrangements of Kanye’s own songs, including Ultralight Beam from 2016’s The Life Of Pablo.

Despite being on stage in the thick of it, the musician only rapped once during the 90 minutes of music, when he performed a verse from 2016’s Father Stretch My Hands, also included on The Life Of Pablo. 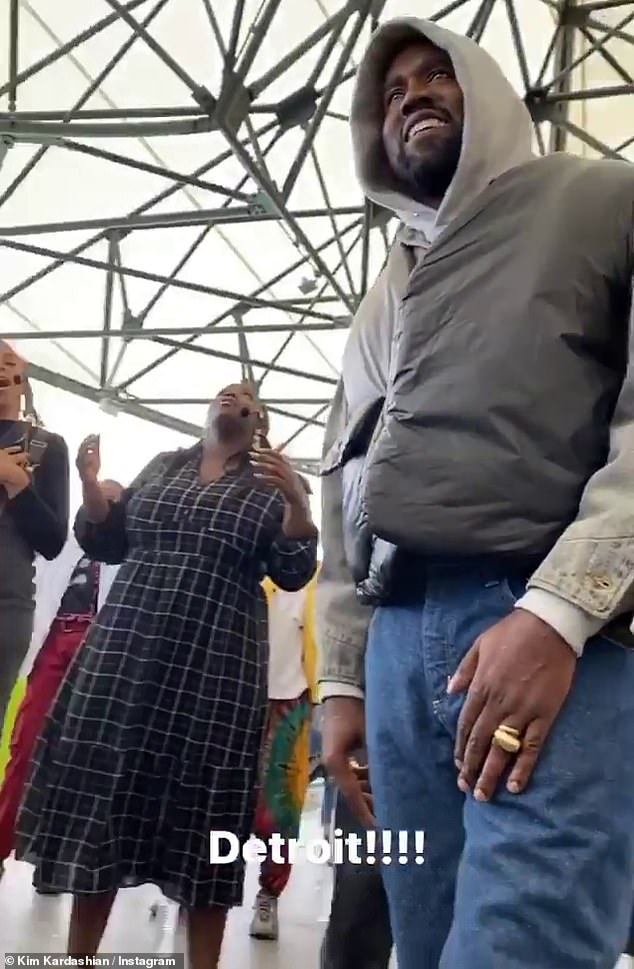 In the shadows: The group sang traditional gospel songs and arrangements of Kanye’s tunes, but he only rapped once on a rendition of Father Stretch My Hands

Kanye’s album Jesus Is King was originally planned for September of last year, but it was delayed indefinitely after it missed a second release date in November.

Tracks recorded in late 2018 were leaked in July of this year, but those songs were left off the supposedly final track list that Kim posted to Twitter on August 29.

‘JUST IN: Kanye West will bring ‘Jesus Is King: A Kanye West Experience’ to #TheFox tonight at 8PM.’

The concert was advertised as a free performances, though details on what would be released or performed were sparse.

However, a request that fans not use their phones during the show suggested the album might finally arrive. 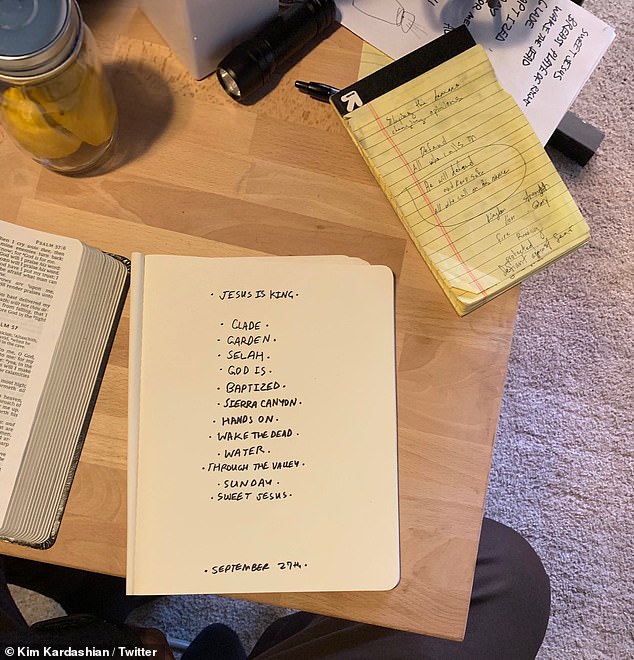 New info: Kim has been responsible for album information dribbles. She shared a handwritten version of the Jesus Is King track list and its tentative release date on August 29 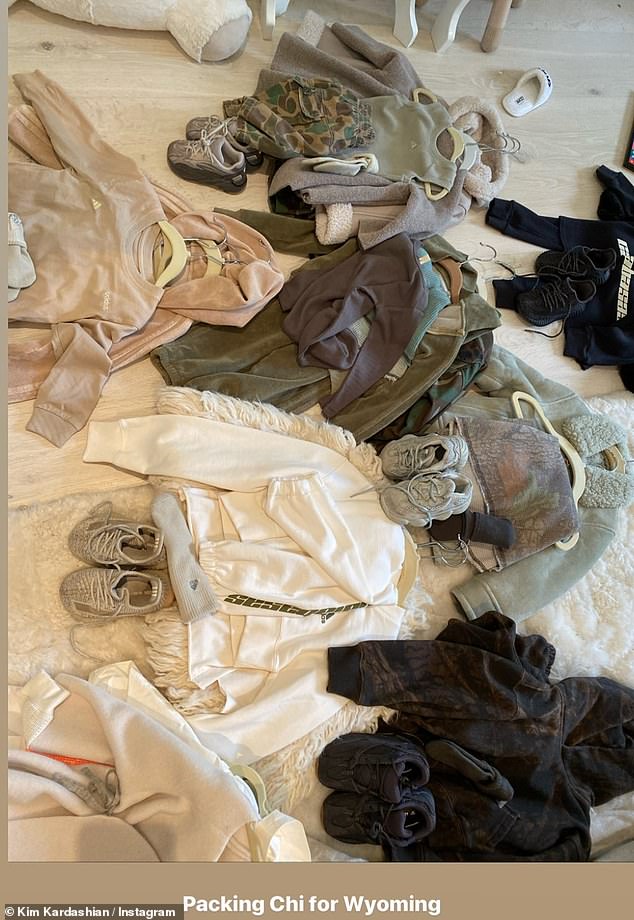 Kim has been instrumental in providing dribbles of information about the highly anticipated music.

She shared a cryptic photo on August 29 that included a handwritten list which was later confirmed to be the track list for Jesus Is King.

On Friday, the reality star posted a seemingly mundane photo of children’s clothes laid out, which she captioned: ‘Packing Chi for Wyoming,’ referring to her and Kanye’s one-year-old daughter Chicago. The couple also share two sons, three-year-old Saint and four-month-old Psalm.

Kanye had previously recorded a series of five mini-albums in Jackson Hole, Wyoming, and he also recorded portions of Jesus Is King at his recently purchased ranch in Cody, Wyoming.

The rapper and producer held listening parties in Wyoming for his most recent releases, though it’s unclear if the family’s trip to the Western state is related to the upcoming music.