Kim Kardashian strips down to her underwear in racy new shoot

Wild wild West! Kim Kardashian strips down to her underwear and a pair of white leather cowboy CHAPS in racy new snaps

Kim Kardashian West is not afraid to show off her wild side while under lockdown.

The 39-year-old reality star wowed her 171 million Instagram followers on Wednesday, as she told fans she was ‘all dressed up with nowhere to go’ in a series of racy snaps.

However, despite claiming to be ‘dressed up’ it was more a case of stripping down, as Kim appeared to be wearing just her underwear, underneath a pair of cowboy-style white leather chaps. 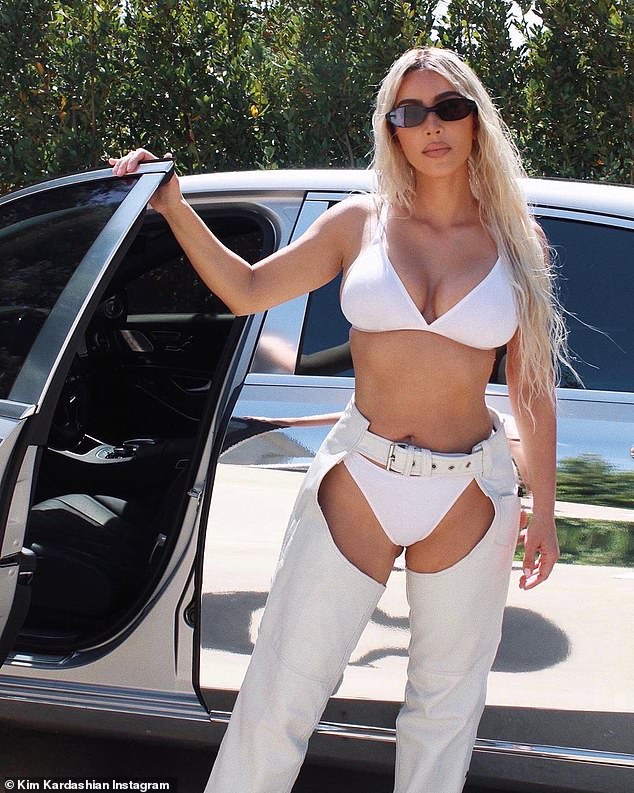 Yee-haw! Kim Kardashian West wowed her 171 million Instagram followers on Wednesday, as she admitted she was ‘all dressed up with nowhere to go’ in a series of racy snaps.

The mother-of-four squatted down as she posed alongside a luxury car that featured a metallic chrome gloss finish.

Kim has been returning to her racy roots on Instagram lately, after posting a series of shots in her SKIMS underwear line.

However, it appears to be going against her pledge to cover up ‘a little’ in remarks that she made last year after getting serious about her law career. 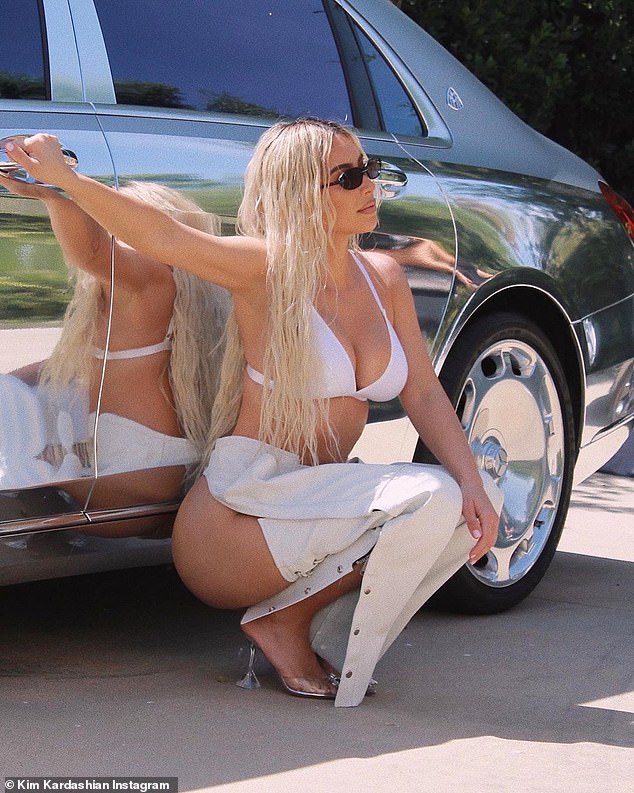 Working it: The mother-of-four squatted down as she posed alongside a luxury car that featured a metallic chrome gloss finish. 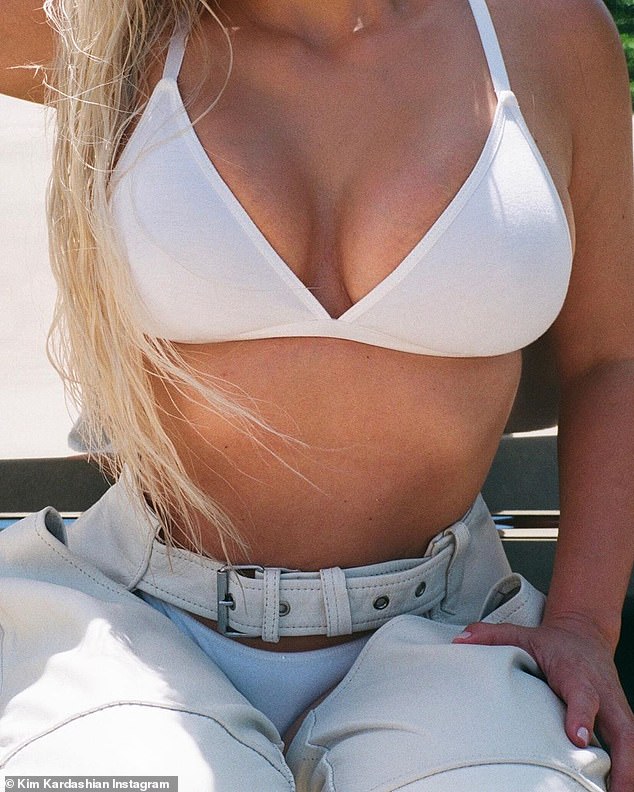 Ready for her close-up: The series of shots included this one of her bra 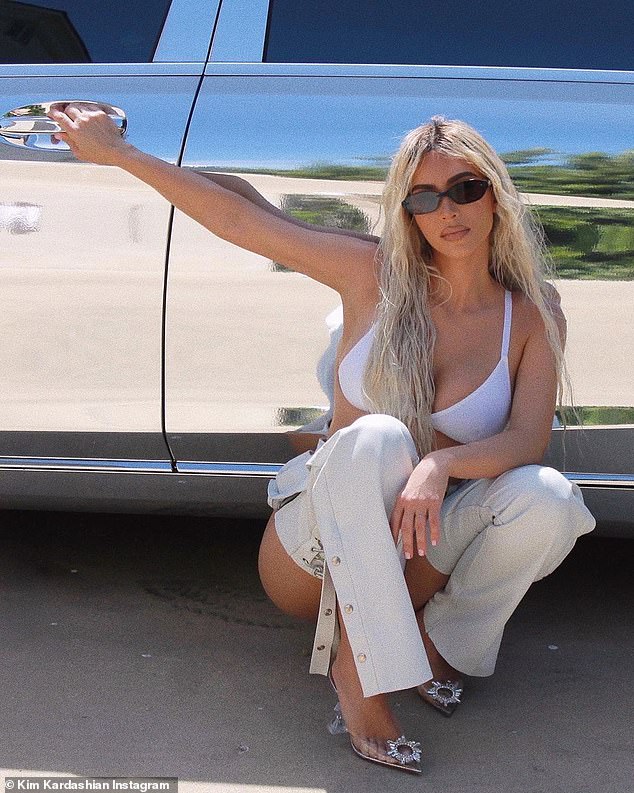 Just hanging out: Kim struck a series of poses for the impromptu shoot on Wednesday

In an interview with Vulture last November, Kim admitted that she had tried to purposefully cover up and dress less sexy, particularly on her social media pages.

Kim explained: ‘I don’t know if it’s the fact that my husband has voiced that sometimes too sexy is just overkill and he’s not comfortable with that. I listen to him and understand him.’

However, she said that at the the end of the day, the rapper ‘always gives me the freedom to be and do what I want.’ 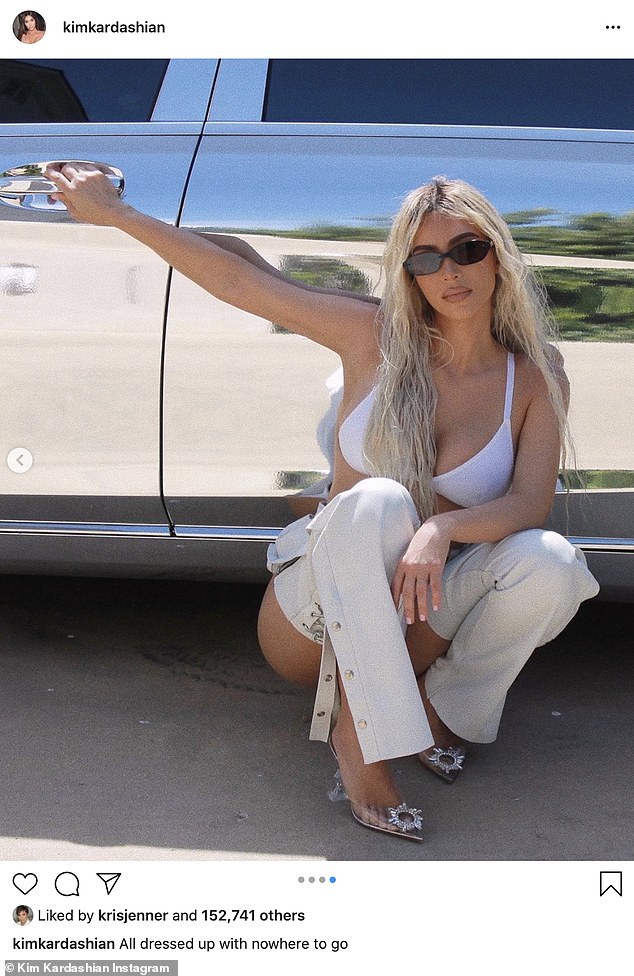 Are you REALLY all dressed up though? Kim’s caption certainly appeared to be playful

Kim then said in the interview that she herself found her own Instagram feed to be inappropriate when shown around her children.

‘But I have kind of had this awakening myself. I realized I could not even scroll through Instagram in front of my kids without full nudity coming up on my feed pretty much all the time. And I definitely contributed to that.’

She added: ‘I mean, one of my most iconic covers was the Paper magazine (Winter 2014) one, when I was all oiled up and ripping my dress off. I also did think, like, Okay, I’m here in the White House.’ 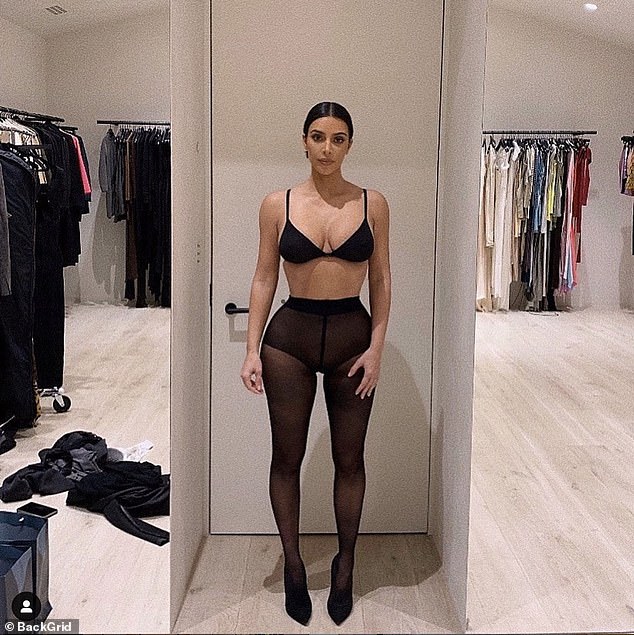 Model behaviour: Kim has been showing off her figure while modelling her underwear brands SKIMS

‘…and then the next day I was posting, like, a crazy bikini selfie. And I was thinking, I hope they don’t see this. I have to go back there next week.’

Kim met with President Trump last July to lobby for Alice Johnson, who was serving a life sentence in prison, but later freed.

The star has been tackling criminal justice reform for some time now, which is the subject of new docu-series The Justice Project.