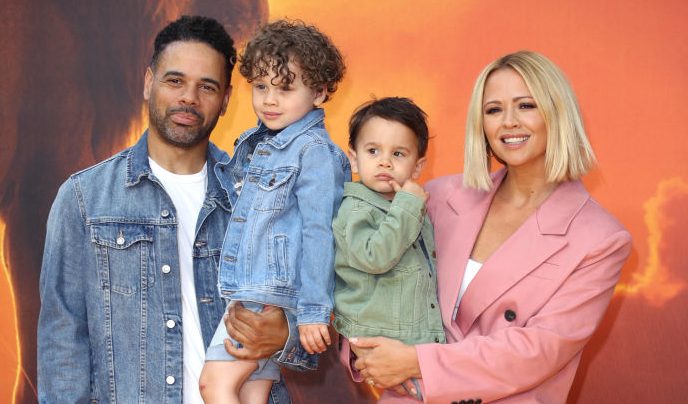 Kimberley Walsh and husband Justin Scott are parents again after the Girls Aloud star gave birth to a baby boy.

They told OK! Magazine: ‘Me and Justin said to each other yesterday that two just didn’t seem enough for some reason, but now we feel complete.’

The singer, 39, and 38-year-old Justin are already parents to sons Bobby, six, and Cole, four.

The pop star said it felt ‘quite special’ being a mum to three boys as ‘male energy is more straightforward and I’ve always liked that’.

‘Even at school, loads of my friends were boys and I’m not the most girly girl, which is probably surprising to some people because of me being in a girl band and all the glamour, but there’s less guessing with boys,’ Kimberley explained.

Her Girls Aloud band mates Cheryl and Nicola Roberts have already met baby Nate, while Nadine Coyle revealed her daughter has put together a box of gifts for him which the singer is planning to bring round. Sarah Harding also sent her a bouquet of flowers and the pair have been messaging each other regularly.

Kimberley shared the happy news she was pregnant in the run up to Christmas 2020, saying it gave her family something to get excited about.

She told OK! magazine: ‘For the family, it’s been a bit of light in the distance and something to look towards and get excited about, and plan for.

‘Because it’s my third it’s going to pop out a little bit quicker. And I do tend to have quite big bumps.’

Explaining that everything ‘happened quite quickly’, the mum-of-three added that Justin ‘always knew’ they would have a third child after they talked about the possibility in lockdown.

Kimberley cutely revealed she was having a boy in a special gender reveal with OK! magazine, with Justin firing blue confetti out of a canon.

She quipped that her husband and two sons were ‘thrilled they’re having another boy, of course.’

Speaking about how she is now outnumbered as the only girl in the house, the Sound of the Underground singer said: ‘My sister has three boys and is pregnant with another boy, so in my head I think I always thought I was going to have another boy. It was not the biggest surprise.’

Kimberley chose to find out the sex of her third baby having chosen not to do so with her other sons.

She originally found out the sex at her 20-week scan, which Justin was able to attend amid the coronavirus pandemic.