Kirk Douglas: The last of the Hollywood legends 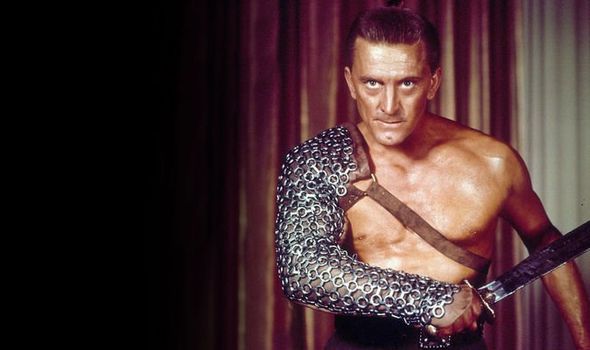 Douglas sank into the cushions, his body seeming to diminish with each passing ­minute. He spoke slowly and deliberately, having re-learned how to talk after a ­debilitating stroke almost killed him in 1996.

It was poignant to think that this was once the muscular hero who raised his sword as Spartacus, the handsome star of The Bad And The Beautiful, and the passionate Vincent van Gogh in Lust For Life, who even in his 70s played tough guys and swung punches on screen.

After an hour of conversation, Douglas seemed to have physically shrunk, weary from the exertion.

Yet when the photographer raised her camera and turned on her bright lights, the centenarian transformed.

His spine straightened, his shoulders swept back, and he appeared to grow six inches in stature. Douglas smiled a gloriously polished white grin, his blue eyes shone brightly and his weathered skin glowed.

He came alive under the camera’s lens, as he had for almost eight decades, young again if only in mind and spirit.

Douglas died at the age of 103 on Wednesday, surrounded by his family.

His wife of 65 years, Anne, and his Oscar‑winning son Michael, 75, were at his side. 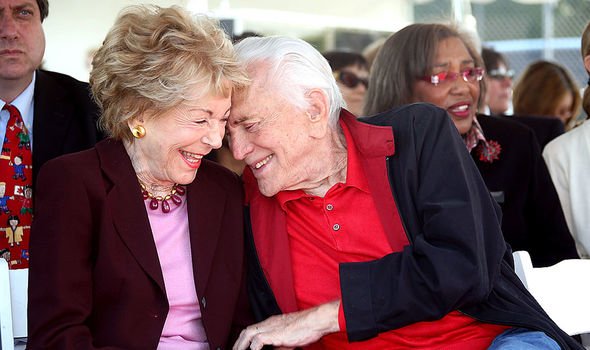 Announcing his passing, Michael wrote: “To the world he was a legend, an actor from the Golden Age of movies who lived well into his golden years, a humanitarian whose commitment to justice and the causes he believed in set a standard for all of us to aspire to.

“But to me and my brothers Joel and Peter he was simply Dad.”

Kirk Douglas was one of the last ­legends of the Golden Age of Hollywood – only Olivia De Havilland, also 103, survives him – and the loss of a generation of friends pained him.

“Where is Burt Lancaster? Where is Laurence Olivier?” he asked on turning 100. “They’re all gone. I miss them. I feel lonely. So many friends disappear and I only have a memory of them.”

He cheated death in a helicopter crash in 1991, and survived a stroke five years later, having to re-learn how to talk and walk. 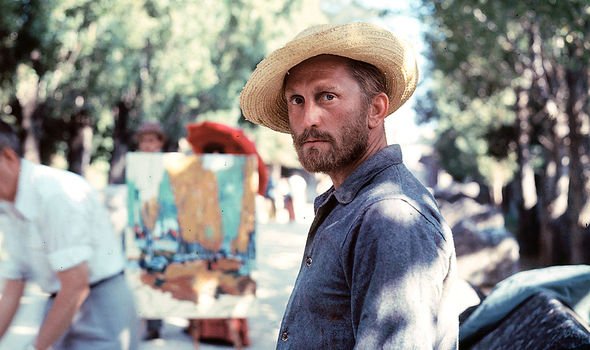 Yet his proudest achievement was breaking the Hollywood blacklist as Senator McCarthy’s anti-communist witch hunt raged in the 1950s.

Douglas produced and starred in the sword-and-sandals epic Spartacus, and risked his career to hire blacklisted Dalton Trumbo to write the script, ­insisting on giving him screen credit.

Warned he’d never work in Hollywood again, Douglas admitted: “I was scared, and I didn’t know what would ­happen to me. Honestly, the story behind the making of Spartacus was as dramatic as the movie.”

Spartacus, the tale of a Roman slave revolt, went on to win four Oscars, ended the blacklist and enshrined Douglas as a Hollywood icon.

He was the ragman’s son – the title of his bestselling memoir – born Issur Danielovitch, the son of impoverished Russian-Jewish immigrants in the town of Amsterdam in upstate New York on December 9, 1916.

“My father got himself a horse and a small wagon and became a ragman, buying old rags, pieces of metal and junk for pennies,” he recalled. Times were tough for Douglas and his six sisters.

“We were living by the railroad tracks and every night hobos would come and knock on the door. Even though we didn’t have enough, my mother always saved something so when they came to the door, she had something to give them.” 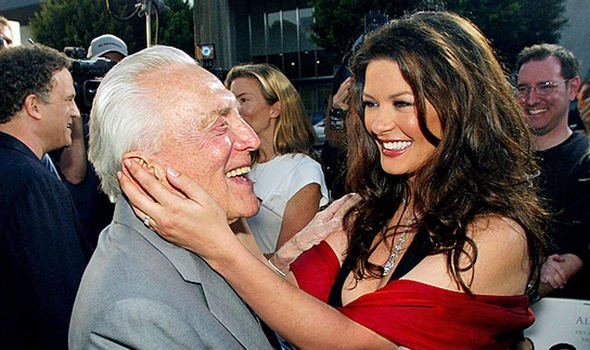 It was a lesson Douglas never forgot. The actor and his wife donated more than £40million to charities, including a home for Alzheimer’s patients and a homeless ­women’s shelter. They also renovated more than 400 playgrounds in Los Angeles.

“I came from abject poverty,” he said. “I didn’t dream of becoming a millionaire. So you have to give back.”

Douglas would have countless lovers on screen and off, but lost his virginity to his English teacher at the age of 15. “I had been a ragamuffin kid of 15 coping with a neighbourhood filled with gangs,” he wrote in his memoir. “Under her guidance I became a different person. I am eternally grateful.”

Douglas acted in school plays, but only turned to the profession after trying more than 40 jobs, including janitor and gardener.

Winning a scholarship to the American Academy of Dramatic Arts, he dated ­classmate Lauren Bacall.

In 1943 he ­married fellow student Diana Dill shortly after being inducted into the US Navy as the Second World War raged.

Hunting Japanese submarines in the Pacific, he was discharged in 1944 after being wounded by a depth charge exploding prematurely and then catching dysentery.

Bacall recommended Douglas for his first movie role in 1946 film noir The Strange Love of Martha Ivers, and in 1949 boxing classic Champion earned the first of his three Oscar nominations. 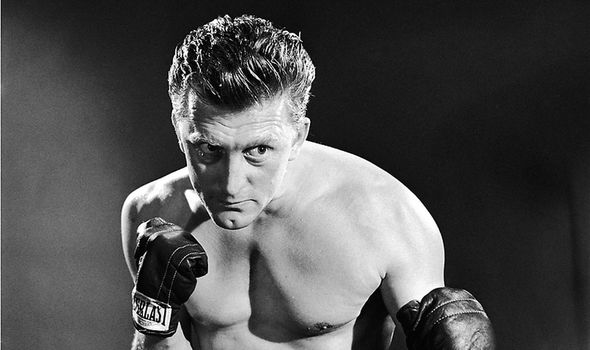 Wife Diana endured his many infidelities, having sons Michael and Joel, but after eight years she called it quits, divorcing in 1951.

Yet even when he wed German-born actress Anne Buydens three years later, Douglas could not stop his philandering. “What’s wrong with sex ­addiction?” Douglas asked when son Michael was accused of suffering from it in the 1990s. “I’ve had it all my life.”

However Anne, who gave Douglas two more sons – Peter and Eric – put up with his cheating. “I owe her so much,” Douglas told me. “I wouldn’t be where I am today without her.”

Taking his hand, Anne said: “We were there for each other, with love and enormous friendship.”

It wasn’t easy on their children either. Son Eric – who died of a drug overdose in 2004, aged 46 – called life with Douglas “like living in a beautiful town next to a volcano”.

Douglas cut off son Michael in a row over the movie One Flew Over the Cuckoo’s Nest.

Michael produced it and gave Jack Nicholson the lead role his father wanted.

They only reconciled after Douglas senior nearly died when his helicopter struck a small plane over a Los Angeles airport in 1981 in a crash that left two dead. 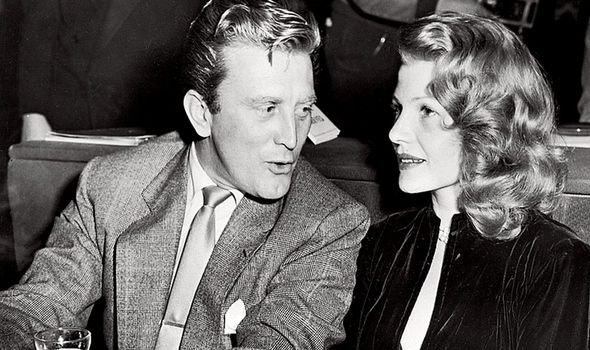 “I was in the hospital, my back almost broken, thinking, ‘Why am I alive?’” he recalled.

He recovered, only to suffer a devastating stroke in 1986 which left him suicidal.

“I thought my life was at an end,” he ­confessed. “But when I put the gun in my mouth it hit a tooth. Ow! And that struck me as funny – a toothache was stopping me from committing suicide.”

Receiving an honorary Academy Award at the 1996 Oscars just weeks after his stroke, he recalled his short speech: “I learned to say two words: Thank you.”

It took years of therapy before he recovered the power of speech and walked again, but Douglas was a fighter. “You endure it,” he said. “It’s a part of life.” As he outlived his friends, Douglas insisted: “I don’t think about death. I think about life.”

A living legend in his final years, Douglas was self-effacing, humble and indefatigable in his lust for life.

And as we parted, Douglas assured we’d meet again: “We’re doing this again when I’m 200.” Sadly, that was not to be.