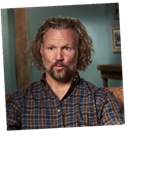 We knew it was only a matter of time, didn’t we?

We’ve been hearing the rumblings and rumors about this happening for years, and we’ve been witnessing the decline of his four, ongoing marriages on television and online for weeks now.

And yet: It still comes as a surprise, doesn’t it?

It still seems surprising that Kody Brown has finally taken on a fifth spouse, which he introduced to Sister Wives fans last night.

That’s right, a fifth wife. Because the first four are clearly so happy with him these days … why not add another?

Over the past array of Sunday nights, TLC viewers have watched one wife after another complain about Kody.

Christine has said she’s jealous almost all the time as a result of her unusual romantic arrangement.

Meri has said the relationship is dead and over and Kody just admitted the two never make love anymore.

Heck, even Robyn, the youngest of Kody’s wives and his presumed favorite, doesn’t sound totally happy.

Plural marriage is just brutal, plain and simple. Yet it continues unabated for the venerable TLC patriarch.

“I was feeling, like, bad. I was feeling not right,” Robyn told celebrity gossip site Us Weekly just a few days ago regarding Kody spending so much time at her house amid the COVID-19 pandemic.

“This is not fair. I mean, I chose this lifestyle for a reason and when things are out of whack, it bothers me.”

It’s hard to argue with her.

“I’ve lost a lot of sleep because of it,” she adds.

“And I don’t understand the choices that are being made as far as our family is concerned, but I have to respect them… I do feel bad and it’s made the whole family experience really hard.”

So, like we’ve said before, all the Sister Wives appear completely miserable. Which must make Kody miserable.

Which explains, in a way only a polygamist can grasp, why he’s once again expanded his immediate family.

Yes, Kody has once again gotten married – in a spiritual sense, that is. Kody Brown’s fifth wife is now a reality.

According to sources close to production and to the Wives, the fifth wife of Mr. Brown is named Bonnie Dwyer.

She is 40 years old, making her even younger than Robyn, and likely sparking even more jealousy between the spouses.

“Kody was looking for someone vibrant, someone still of child-bearing age in case he wants another kid,” one insider explained.

“He has connections in the world of polygamy and a friend told him Bonnie would serve his every need, whim and desire.”

What do we know about the latest addition?

Bonnie is a native of Utah (no surprise there) and, like so many other women who end up in this kind of situation, comes from her own polygamous family.

She has 13 siblings, nine of which are half-siblings; this is to say, they share the same father, but have a different mother from Dwyer.

By all accounts, she’ll also be featured in the next season of Sister Wives, which helps explain in part why Kody decided to get hitched again.

With fans complaining about boring, stale storylines… and with ratings dropping over the past handful of years… the program will now have a brand new storyline on which to focus.

No word yet from Kody nor Christine nor Meri nor Robyn just yet about Bonnie and how they feel about this decision they clearly didn’t play any part in.

We haven’t received confirmation from TLC executives, either.

And we think we know why…

… because it’s APRIL FOOLS DAY, everyone!

This is all just a joke and, as far as we know, Kody has not actually married a fifth sister wife.

Did we fool you? Do you now hate us?

We’re very sorry, if so.

If it makes you feel any better, just remember that Kody probably will add another spouse someday. So this wasn’t a complete fabrication!