Kourtney Kardashian and Travis Parker got into the Halloween spirit early on their trip to Knott’s Berry Farm this weekend.

The couple enjoyed all sorts of terrifying encounters at the theme park, dubbed Knott’s Scary Farm during the fall months, as they rode rides and kissed among ghouls.

The KUWTK vet 42-year-old wore a black jacket that read ‘Don’t’ on the right side. She let her hair fall down to her shoulder in a short, bob cut. 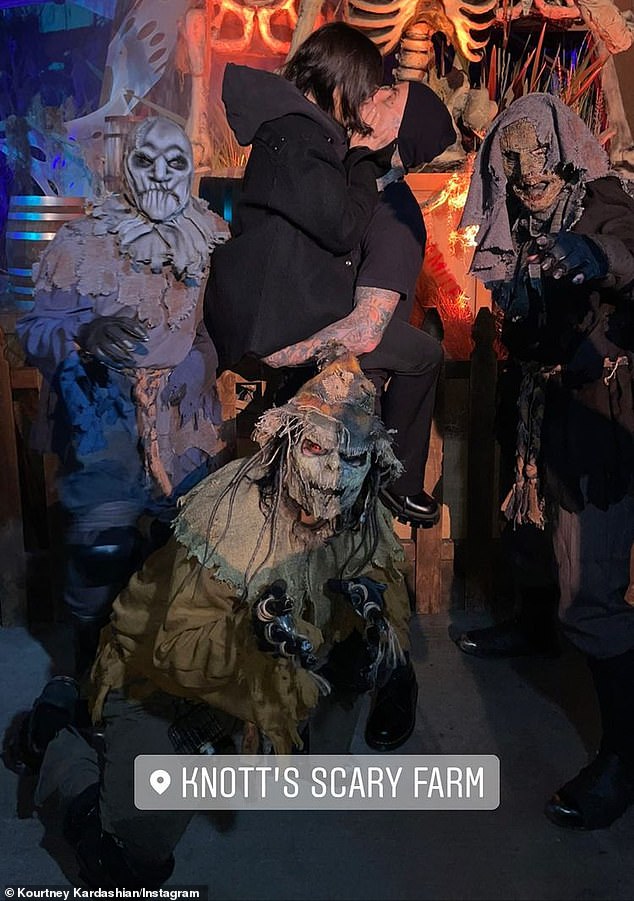 Sharing a kiss: Kourtney Kardashian and Travis Parker got into the Halloween spirit early on their trip to Knott’s Berry Farm 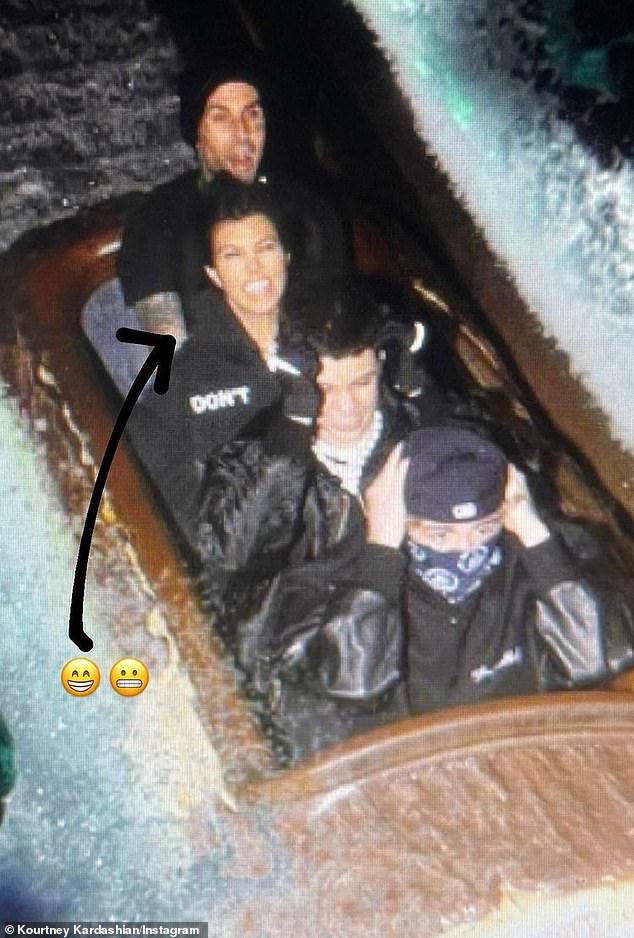 Enjoying the theme park: The couple rode rides together including the Timber Mountain Log Ride

The reality star’s better half wore a back t-shirt and similar beanie which covered his myriad of head tattoos.

Barker and Kardashian rode the Timber Mountain Log Ride together and the He’s All That actress posted pictures from the experience on her Instagram.

In one she even put an arrow toward her hair, pushed firmly back by the wind at the big drop, and placed two emojis on the picture – one laughing face and the other a nervous expression. 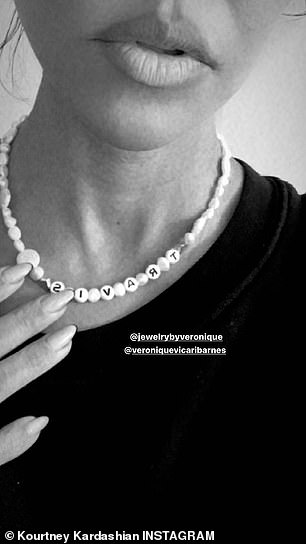 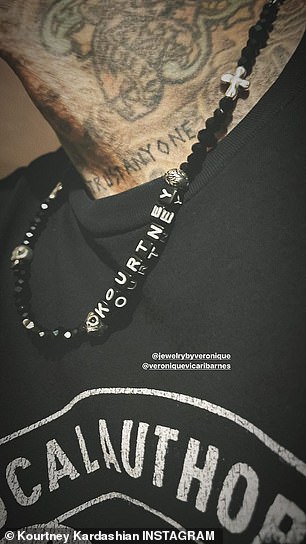 Linked by necklaces: They also both had beaded necklaces on that said each other’s names. She wore a white model that said Travis and he had on a black one that said Kourtney. The jeweler was Veronique

They also both had on kids’ beaded necklaces. The pieces of jewelry had each other’s names on front.

She wore a white model that said Travis and he had on a black one that said Kourtney. They both tagged the jeweler who is Veronique. 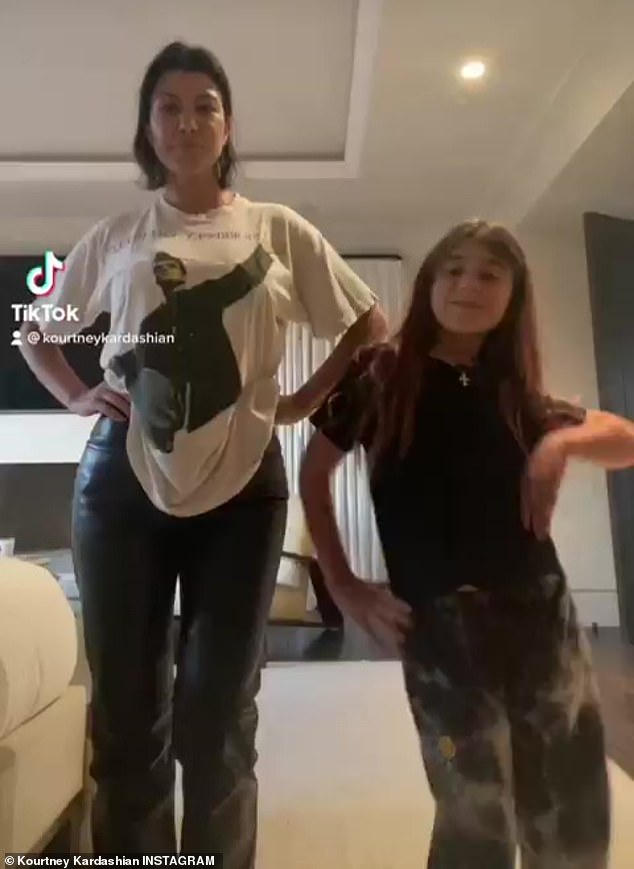 Dating with kids: Kourtney, seen here with daughter Penelope, age nine, made a TikTok dance video together recently. The 42-year-old has three children 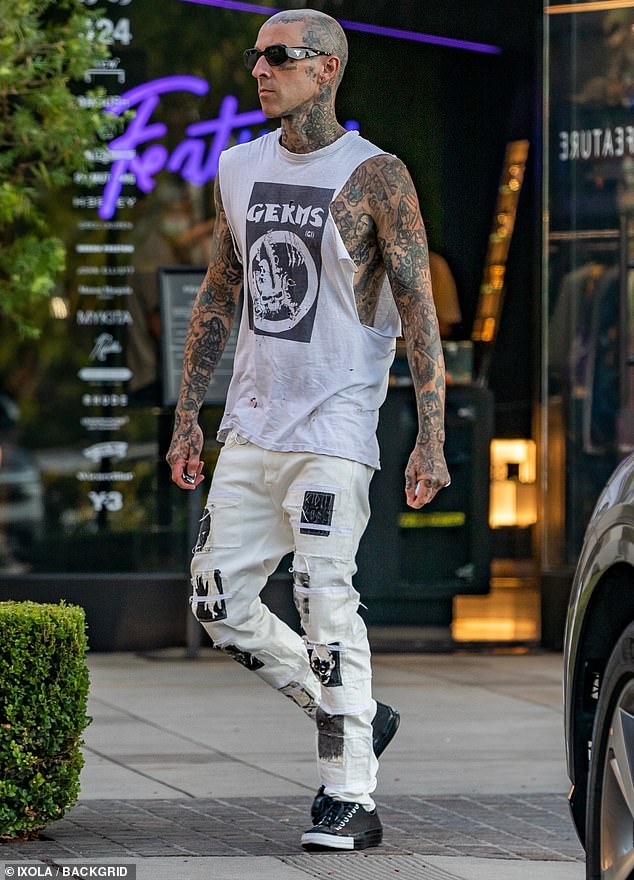 Not his first serious relationship: Barker has been married twice before and has two kids with his second wife

The couple started dating last year, but the news became official this past January.

Both of the stars have been in long-term relationships before.

Kardashian was with KUWTK guest star Scott Disick from 2005 to 2015. They have three children together: Mason, Penelope and Reign. 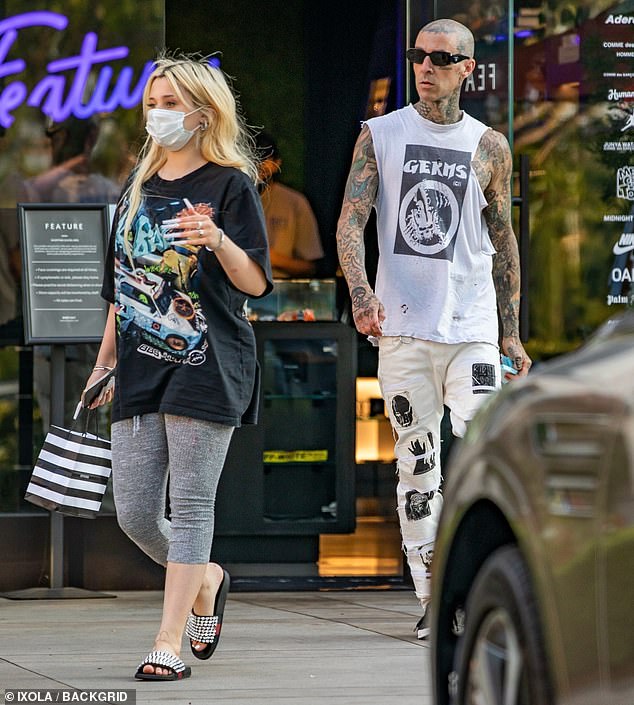 Father daughter time: Barker went shopping with his daughter as the two spend quality time together

Barker was recently seen with one of those children, his 15-year-old daughter Alabama.

The pair went shopping at the Calabasas Feature store, which sells rugged apparel for men, women and children

Barker’s daughter wore a black t-shirt with cars all over the front and gray sweatpants. She had white acrylic nails affixed to her fingers.

Her father wore a white, sleeveless t-shirt which said Germs on the front and matching white pants with black markings on them. 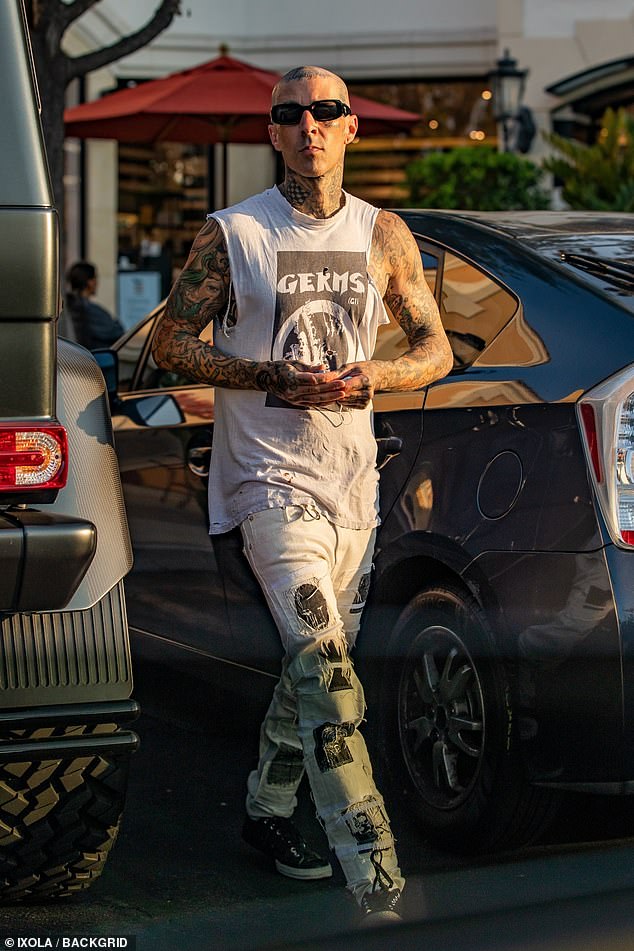 Dressed like a rock star: Her father wore a white, sleeveless t-shirt which said Germs on the front and matching white pants with black markings on them