Kris Jenner Speaks Out On Kourtney’s Romance With Travis Barker

Mama Bear has spoken! Kris Jenner, momager extraordinaire, has weighed in on how she feels about her eldest daughter Kourtney Kardashian’s whirlwind, PDA-filled relationship with Blink-182 rocker Travis Barker.

Kourtney and Travis went public with their romance in January, after being friends for many years, per Us Weekly. It seems that love blossomed between friends. The two live near each other in the same gated community in Calabasas, and Travis and his ex-wife Shana Moakler have appeared on “Keeping Up With the Kardashians.”

The relationship grew romantic in early 2021. Fans noticed Travis commenting on Kourtney’s Instagram posts, including one of Kourtney taking a sexy photo of herself in her underwear in her closet. Travis commented with a red rose emoji. In January 2021, Us Weekly confirmed that Kourtney and Travis were a couple, with a source saying that they had been “dating for a couple of months” and that Travis had been “smitten” with Kourtney for a while.

Though fans have had mixed but mostly positive reactions to the relationship, they may be wondering what Kourtney’s family thinks. Well, Kris has issued her verdict on her eldest daughter’s relationship.

Kris Jenner thinks Kourtney and Travis' relationship is "the best" 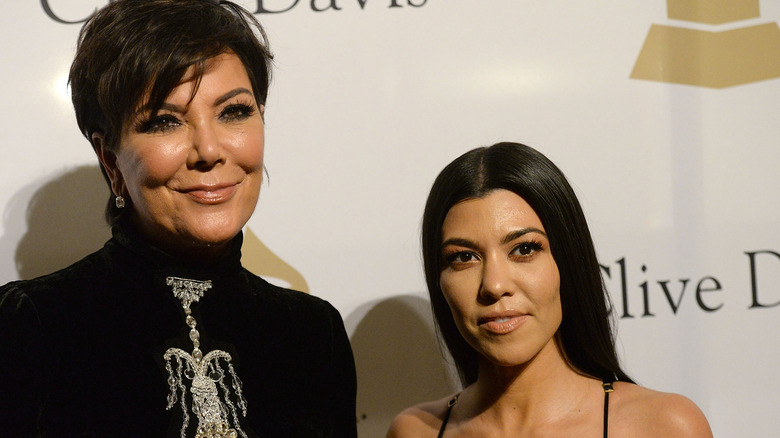 On June 10, Kris Jenner appeared on “On Air With Ryan Seacrest.” The iHeartRadio team had nothing but praise for Kourtney Kardashian and Travis Barker’s relationship, which led Kris to admit how she feels about it, per Daily Mail. When actor Tanya Rad said to Kris, “I love their love,” Kris replied, “Isn’t it great? I know, it’s the best.”

Rad asked Kris what she thought of Kourtney’s recent Instagram Story that was just a photo of a vial of Travis’ blood. Kris admitted, “Here’s the thing. I don’t know what that means,” Kris admitted (via E! News). “I’ve got to have a little chat with Ms. Kourtney and find out what’s going on.”

It’s great to see Kris approves of Kourtney and Travis. Fans will remember that wasn’t all that long ago, after all, that the momager was encouraging her firstborn to get back together with her baby daddy, Scott Disick. In hindsight, it makes sense that Kris approves of Travis; something tells us, if she didn’t, that relationship would be over before the end of the week.