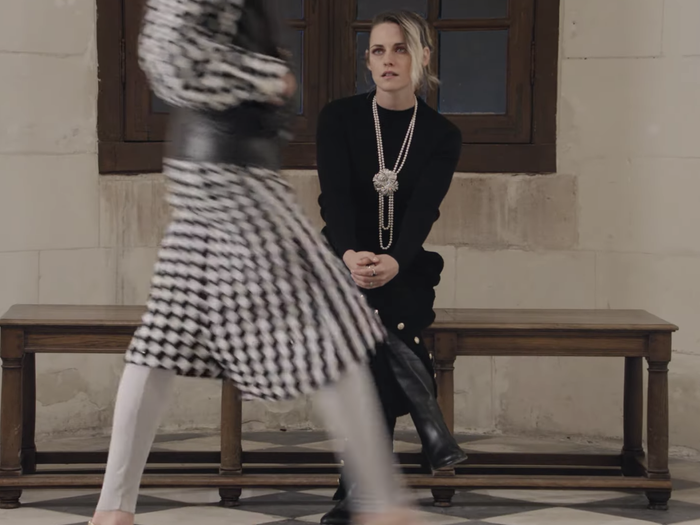 Chanel didn't let the coronavirus pandemic prevent it from revealing its latest collection, but its guest list differed from runway shows of previous years.

Just one person was present to view the show in person: "Happiest Season" star Kristen Stewart, a Chanel brand ambassador and muse.

Chanel's latest show was held at a castle known as the Château de Chenonceau in France. The luxury fashion house showcased its 2020/21 Métiers d'art collection, which was filmed and released in a YouTube video on Thursday. The video shows Stewart sitting on a bench in a hall empty of all other people, except for the models.

According to Nylon, due to COVID-19 social-distancing guidelines in France, the event could only host essential personnel, which included 300 cast and crew members, as well as Stewart.

Fans of the "Twilight" actress seemed to get a kick out of the jarring visuals that came from her solo fashion show appearance.

Twitter's official Fashion account picked up on Stewart's front-row seat, calling the fashion show that seemed to be put on just for the actress an "iconic" moment.

In a statement published by The Cut, Chanel's creative director Virginie Viard called the Château de Chenonceau — the location of the fashion show — "an obvious choice." The castle was designed by two people from which Coco Chanel drew inspiration: Diane de Poitiers and Catherine de' Medici, according to The Cut.

At Milan Fashion Week in July, Etro and Dolce & Gabbana were the only designers to showcase their collections in person, utilizing outdoor spaces, while other designers opted to show their fashions solely online.

At the event, guests sat distanced from each other in the outdoor space as models walked down a makeshift runway wearing face coverings that matched their outfits.

"When #fashionweek really goes home you sometimes got to get down and dirty and do it yourself," Siriano wrote in an Instagram post ahead of the event.

Representatives for Chanel did not immediately respond to Insider's request for comment.