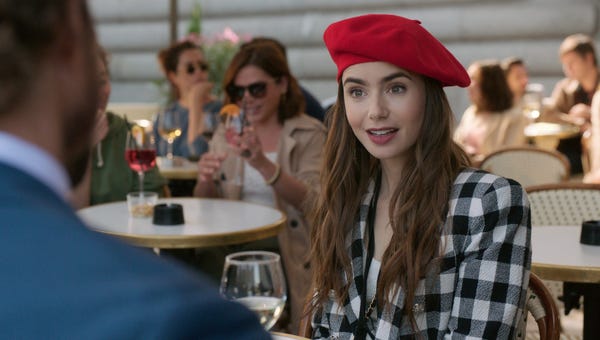 "Emily in Paris" star Lily Collins has shared some background information on her controversial lead character.

During a deep dive on the show with British Vogue, Collins, 31, said that she doesn't think Emily was ever given a "specific 'number' for her age," but she personally believes the young ex-pat is "like, 22-ish."

"She's pretty fresh out of college," Collins said. "Maybe this is her first year after graduation. I want to say she's like, 22-ish. She's had enough experience at her company in Chicago to have earned the respect of her boss. She's a smart cookie and really innovative – and this is not her first rodeo doing what she does. She's gone to school for this, and she's completed internships."

In the show, Collins plays Emily a marketing executive who, despite not being able to speak any French, moves from Chicago to Paris to join the ranks of a high-end digital marketing firm.

Speaking about her character's struggle to adapt to French culture or relate to her new Parisian colleagues, Collins said that she thinks if Emily "had gone to a different company in Chicago, she would have been taken seriously." But in Paris, she was "not prepared for the cultural shift that she experiences at Savoir. Her only real experience of Europe is through movies and TV."

Collins also reacted to critics who have slammed the show and its creator Darren Starr for indulging in outdated and offensive stereotypes of Paris.

"It's funny because a lot of the experiences are based off of things that have happened to friends of Darren [Star] – that classically American thing of going to another country and being really … alienated yet trying to embrace it," she said.

"When I got to Paris for filming, I actually had so many experiences like Emily – to the point that I asked the team, 'Are you planning this to try and give me more empathy for her? I already have empathy for her!' I mean, the heating in my apartment broke for two weeks; I got the floor wrong in my building; my elevator stopped working … I even nearly stepped in dog poop.

"It's a cliché, but it's also a fundamentally human scenario. In the end, it's all about Emily's attitude; she just gets through it, and she does it with a little bit of humor."

Despite the critical panning, there have already been talks of a second season of "Emily in Paris."

Speaking with Oprah Magazine, Darren Star said: "In season 2, she's going to be more of a part of the fabric of the world she's living in. She'll be more of a resident of the city. She'll have her feet on the ground a little more. She's making a life there."

The 23 most unrealistic moments from Netflix's 'Emily in Paris'

Netflix has a TV-show problem