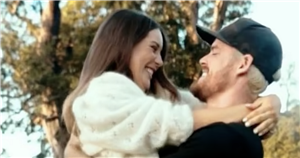 Louise Thompson has revealed she's having a baby boy.

The Made In Chelsea star took to Instagram to reveal the very exciting news with an amazing video with fiancé Ryan Libbey.

The pair can be seen walking through a field with a baseball bat and ball, and as Louise throws it and Ryan hits it, blue smoke powers through the air.

The sweet couple run towards each other and jump up and down before hugging and kissing as Ryan lifts his pregnant partner up in the air.

Fans and friends of the stars rushed to the comments section to share their congratulations.

"So much joy! Couldn’t be happier for the both of you x," Jacqueline Jossa penned.

Zara McDermott added: "I’m so obsessed with this," followed by heart emojis, before adding that she was "crying."

Louise's baby reveal comes after she told new she "doesn't recognise herself," while pregnant.

She added: "I look a lot older and more feminine and curvy, but Ryan loves it. He says it’s a big achievement and I should just enjoy it.”

While Louise adapts to the changes to her body – including unexpectedly big boobs and the dreaded cellulite – she says she’s still exercising… just!

Louise added: "I’m a lot more tired than I thought I’d be. My body is slowing down. I’m really short of breath today – I suppose that’s all normal now I’m at the 20-week stage.

"And I’m getting heavy. There’s less space left in my tiny, short body. The baby is pressing up into my diaphragm. Although that’s probably the enormous cottage pie I just ate – I think it was for two people!"

"Up until my 16th week of pregnancy I was doing three or four classes a week, but now everything is pushing out a lot more, I’m less mobile. I do a strengthening class and then either a yoga or Pilates class every week.

"I walk our two dogs and sometimes will go down to my mum’s basement, where we’re staying, and will put some loud music on, grab some weights and do some choreographed moves."

"I wasn’t expecting my boobs to balloon! I thought it would be a gradual growth but they just won’t stop growing. That was pretty immediate.

"I’ve always been someone who had the luxury of wearing T-shirt bras or the quite low-key sports bras I live in, as they’re so comfortable.

Now I’m resisting getting a proper bra. I have so much sympathy for people with bigger breasts – you have to support them when you’re running and moving around."