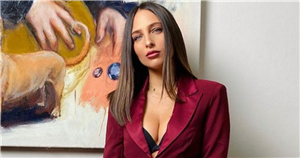 We saw the two come face to face on the new series of Made In Chelsea, and now Maeva D'Ascanio has blasted ex-boyfriend Miles Nazaire and called him selfish.

The brunette beauty, who hinted that James Taylor will propose soon, explained what it was like seeing her ex again for the first time in a year when they lived in the same house along with their other castmates for filming.

Speaking exclusively to OK! Online, the 28 year old shared what was going through her mind when she heard about Miles returning to the show after taking a series off.

She said: "I was alright to be honest because it's not like I care, I've managed to not care about Miles for years now, because we broke up three years ago and we haven't seen each other.

"Living in a house with your ex was obviously really like, 'What am I gonna do? Do I have to talk to him? Should I just not talk to him?', but I know at some point we're gonna talk to each other because we're gonna see each other."

The pair attempted to be on good terms in the first episode of the new series, with Maeva defying boyfriend James' wishes to not go on a walk with her ex.

However, things soon turned sour when Maeva and Miles, 25, were caught speaking to one another in French.

When asked why she wanted to be on good terms with him, the French native explained: "It was the curiosity I would say. I didn't want a friendship with him, I was just a bit curious.

"When I first arrived, we had a few drinks and then we had some conversations and it just got to the point where people basically around us were watching us and they obviously maanged to start to judge us, thinking that obviously we're speaking in French so they're probably saying things that are a bit flirty and that wasn't the case.

"That wasn't the case for me, that was the case for him, I felt really uncomfortable to talk to him for the first 48n hours there," Maeva divulged.

The ladies man caused quite a stir when he returned to the reality show, and Maeva believes that was his intention.

She continued: "This is what he does in general. He doesn't have anyone to care about, he's by himself and he's very, very selfish.

"It's always all about him, very narcissistic, it's just him basically. He doesn't have a girlfriend, he doesn't care what people think and the only thing he likes doing is causing problems.

"This is something I noticed with him, because since I broke up with him, he has changed completely into a different person and is actually becoming a mean person," she expressed.

Catch Maeva on E4's Made in Chelsea on Monday's at 9pm.