MAFS UK’s Amy Christophers blasts co-star Jordon: ‘Most girls are too good for him’ 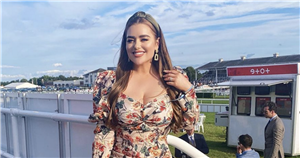 MAFS UK star Amy Christophers has taken aim at her co-star Jordon Mundell, who left the series at the first commitment ceremony following a cheating scandal.

Jordon was paired with Alexis Economou but after a rocky start, their marriage fell apart when it was revealed that he had kissed another cast member behind his wife's back.

In a new Instagram Q&A, 34-year-old Amy makes her feelings towards Jordon very clear Jordon – telling fans that most girls are "too good" for the 27-year-old star.

A fan said to he: "You’re way too good for Jordon. I hope you heal and find that special person."

"I am too good for Jordon and so are most other girls," she added, before correcting the viewer by adding: "It’s a good thing my husband is actually called Josh.”

This isn't the first time Amy has shared her thoughts on Jordon, as she previously warned Alexis that he had a "bad vibe".

She said: "In the first dinner party, if you lipread, you can see that I say to Alexis, 'I don’t like him. I get a bad vibe from him.

"I just didn’t like Jordon from the off," she continued. "I just knew that there was something about him that was off."

After the heated dinner party – which saw Jordon clash with Nikita Jasmine – the inaugural commitment ceremony of the series revealed Jordon and Megan Wolfe cheated on their partners, Alexis and Bob Voysey.

Megan and Jordon shared a kiss behind their partners' backs, and Alexis was later seen forgiving Jordon for cheating on her with Megan, as she doesn't like to hold grudges.

"He has apologised and I accept his apology," she said.

"I don’t really hold grudges in life because it’s more a burden on me than the other person. I do forgive easily, but I don’t forget."

The star went on to add how she would react if she saw Jordon "out and about".

‘If I was to see him out and about, there wouldn’t be any issues," Alexis continued. "I would be like, 'Hey, how are you?' but I definitely wouldn’t say we’re friends."

For all your updates on MAFS UK, sign up to our daily OK! newsletter.