Marnie Schulenburg, As the World Turns Star, Dead at 37 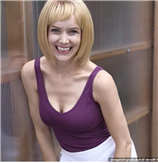 Marnie Schulenburg, a veteran actress best known for roles on As the World Turns and One Life to Live, passed away on Tuesday due to complications from breast cancer.

Schulenburg’s husband, Zack Robidas — an actor who has appeared on Sorry for Your Loss and Succession — confirmed the sad news via a lengthy and emotional post on Facebook.

“We chose to attack her diagnosis with blind optimism.

“We only talked about the future and continued moving forward. I don’t know if this was right but it’s all we knew how to do.”

Schulenburg — who also had parts on such hits shows as Blue Bloods, Army Wives, Royal Pains, Divorce and The Good Fight — died a hospital in Bloomfield, New Jersey.

Just 9 days prior, she posted on Instagram about her diagnosis.

“Two years later, I’m still here and my chances of staying better with her each month,” the star wrote.

Schulenburg proceeed to reference both her own mother and her young daughter, Coda, with whom she’s pictured above.

“I know that me being here for [Coda] is the best gift I can give her.

“But right now, it feels like settling since she’s getting a half-life version of myself. My mother showed up 100 percent all day every day for me growing up, or at least it seemed that way.

“I want to give Coda the same, but I must be kind to myself and remember that nothing is permanent.”

Schulenburg’s first television credit was as Alison Stewart on As the World Turns in 2007.

She then came on board the series full-time and eventually appearing on over 300 episodes until the show was cancelled in 2010.

Three years later, Schulenburg starred in a short-lived revival of the ABC soap opera One Life to Live, taking the character of Jo Sullivan.

From 2014 to 2017, she starred in the meta soap opera “ainted Dreams, which chronicled the backstage drama of a soap opera cast.

Most recently, Schulenburg played the recurring role of Maggie Caysen on the Showtime drama City on a Hill, with Season 3 premiering in July.

Schulenburg is survived by Robidas and their daughter.

We send our condolences to her friends, family members and loved ones.

May Marnie Schulenburg rest in peace.

Celebrities Who Died In 2022: In MemoriamStart Gallery