Matt Roloff Retirement Imminent: What Will Happen to Roloff Farms? 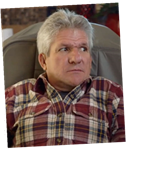 Even though Little People, Big World filming is underway, there are still questions about the family’s future.

The Roloffs have been on television for a long time. They’ve had changes, with more to come.

The future of the farm has never been set in stone, but now, the stakes feel especially high.

Family patriarch Matt could retire very soon. When he does, what becomes of Roloff Farms?

An inside source spoke to The Sun about everyone’s favorite place to get pumpkins.

According to the insider, Matt’s kids don’t have any issues with being off of the farm right now and are happy to live their lives.

That said, at least some of them are considering whether to return and take charge one day.

See, as a lot of you already know, Matt and his girlfriend, Caryn Chandler, are a serious couple.

They’ve been together since … we could generously say since Matt’s divorce from Amy.

One day soon, the two will devote their time to each other instead of to the farm.

The insider adds that this will happen “probably by the end of 2022.”

The source explains that “they think it’s time after years of hard work.”

“They want to live between Arizona where they have a house and Oregon,” the insider details.

The source adds that they want to live this way “while also building their dream home together.”

So when that day comes – very soon, per the report – what will happen to the farm?

“Zach is interested in taking over,” the insider says of Matt’s son and fellow co-star, a father of two himself.

According to the source, “he wants to keep money coming in for the family.”

“And,” the insider describes, “he enjoys it.”

“He has always helped with pumpkin season,” the source notes of Zach and the farm’s signature crop.

With that in mind, it seems like a natural fit for him to be involved with the farm’s future.

And Zach isn’t the only member of the Roloff family who could be involved.

“Jeremy is okay with this,” the insider describes, referring to Zach’s brother, who is married to Audrey Roloff with two kids of his own.

“But also desperately wants to be [a part] of the business,” the source adds.

According to the insider, “there are discussions he could end up co-owning the farm with Zach moving forward.”

This is when we start to hear the alleged private thoughts of a member of the family.

“Secretly Matt would rather Jeremy be involved,” the source claims.

The insider explains that Matt isn’t playing favorites, and only wants this “because he gets the business a little more.”

In the past, Matt has said that he was not quite ready for retirement, although things may be different now.

It goes without saying that 2020 was a difficult year in more ways than one.

With this in mind, Matt is prepared to have these important conversations with his family.

Matt said nearly as much on Instagram recently as he addressed his followers.

“The ultimate scenario for me is that the twins would take over the farm and work together,” the grandfather expressed at the time.

“But,” Matt acknowledged, “nobody likes to run that pumpkin patch like I do.”

Jeremy has shown public interest in assuming the mantle, expressing a “passion for land.”

Meanwhile, Zach has not publicly addressed the issue one way or the other.

We are sure that both men would consider how their respective wives might feel about all of the changes that this might bring.

This money then went to the employees of Roloff Farms – 28 in number.

It’s not enough to simply keep the farm afloat — employees need to be fed and housed during a crisis, and that’s what PPP loans are for.