On a recent pre-pandemic night in February, Mindy’s Hot Chocolate in Chicago was buzzing for a unique “Flavor Trip” tasting event. Industry folks and influencers mingled between exquisite stations, each offering a distinct, fruit-forward pairing. At the setup near the entrance, a rich black-cherry cobbler with fresh cream mirrored the burst of poached cherries and hint of vanilla found in a Lush Black Cherry gummy. Nearby, a refreshing sorbet enhanced a Botanical White Grapefruit gummy, with its juicy, sweet-tart citrus notes and touches of gin reminiscent of a summer cocktail. Flanking the bar, an array of Segal’s chocolate brittles, speckled with shortbread, marshmallow and nuts, overflowed on a self-serve tray to sample.

Mindy Segal, the restaurant’s owner, presided over that night’s proceedings, her no-nonsense reputation displayed as she moved between the kitchen, directing staff, mixing in some friendly hobnobbing. That kind of orchestration comes second nature to the chef, who opened her namesake restaurant in 2005, after working at several of Chicago’s lauded restaurants including the now shuttered Charlie Trotter’s — for decades, the city’s haute-cuisine standard. But the event was also a peek behind the curtain of how the celebrated chef crafts her new marijuana-infused concoctions. In the year Illinois’ medical marijuana bill took effect (the bill was signed in August 2013 and took effect in January 2014), Segal partnered with Cresco Labs. On the intentionally selected date of April 20th, 2016, Mindy’s Chef Led Artisanal Edibles, as the line is now known, was officially launched and available in medical dispensaries throughout Illinois. As a pioneer in the medical marijuana edibles field, Segal is well-established as a leader in Chicago’s newly legalized recreational edibles scene.

“I’m an advocate for cannabis, always have been,” Segal tells Rolling Stone. “In my mind, I have a skill: I’m a chef. And I really wanted to change the way people thought about edibles. I wanted to normalize the industry, make it comfortable for people to experiment.”

In a city with passion for all types of food — from heated debates about pizza styles and hot dog condiments, to three-star Michelin restaurants like Alinea — Chicago’s culinary scene is as diverse as it is experimental. So it’s no surprise that the first James Beard Award-winning chef to enter the legal edibles market would hail from the Windy City. Segal is a renegade in the field, entering at a time when the cannabis industry, while then-legal medically in Illinois, was still viewed as a risky decision, particularly for a chef who had a prestigious award under her belt. “I definitely had hesitations,” Segal says of her decision to craft edibles. She consulted her parents about it. “We sat and we talked about it ethically and morally,” she added. Ultimately, with her parents’ approval, Segal went for it.

Segal sought to elevate edibles, where the flavor components are as important as the medicinal properties. And unlike the weed brownies we might make at home, her gourmet confections are devoid of the taste of marijuana, which she felt would be important for medical patients. “If you look at the wide range of people that are partaking in edibles, the majority in Illinois were medical patients that needed to have this and the flavorless and odorless [taste] of the candies are better that way.”

“The recipes that we use are the recipes I use in my restaurant,” she explains. “We’re just adding oil, and we’re adding distillate — it’s flavorless and it’s odorless. So, it’s without terpenes. So, it’s just straight THC.” Segal acknowledges that this type of infusion isn’t for everyone. “You know it’s a divided world. Some people like terpines and some people don’t. It just depends,” she says. “Hopefully as we work all these products and we rework them, we’ll have something for everybody.”

Segal’s edibles are being reformulated, beginning with the newly redeveloped gummies, which are now available in microdoses ranging from two to five milligrams of THC, allowing for a more precisely controlled experience, and come in six new flavors. Her reformulated taffy line will be launched in Illinois in June, with plans to roll out the brittles that launched the line, as well as hard sweets and baked goods in the near future. Mirroring her event in February, Segal’s development process begins in the kitchen, where she creates desserts and sweets that are later encompassed in the flavor profiles of her edibles. In addition to fresh fruit, she includes ingredients like aromatic brown butter and infused sugar she creates herself.

“I like brown [butter] for the intensity of the flavor, where that flavor would enhance whatever I’m making,” she explains. “And I never throw away my tea leaves … I actually dry them out in sugar and then I make sugar. And I have to tell you, I have these sugars and I’ve made stuff with them and it’s like you can taste the tea in the product. So it’s really, really, really intense and interesting, it’s a trick of my trade. I kind of made that up myself, I didn’t really learn that from anybody.” She makes tea syrup as well. “I’m a real firm believer in making it yourself,” she adds. “I do this with the flavor that I’m trying to bring out and how it will enhance it the most. So I guess I’m always thinking about that and that’s why I’m always thinking about the process.” 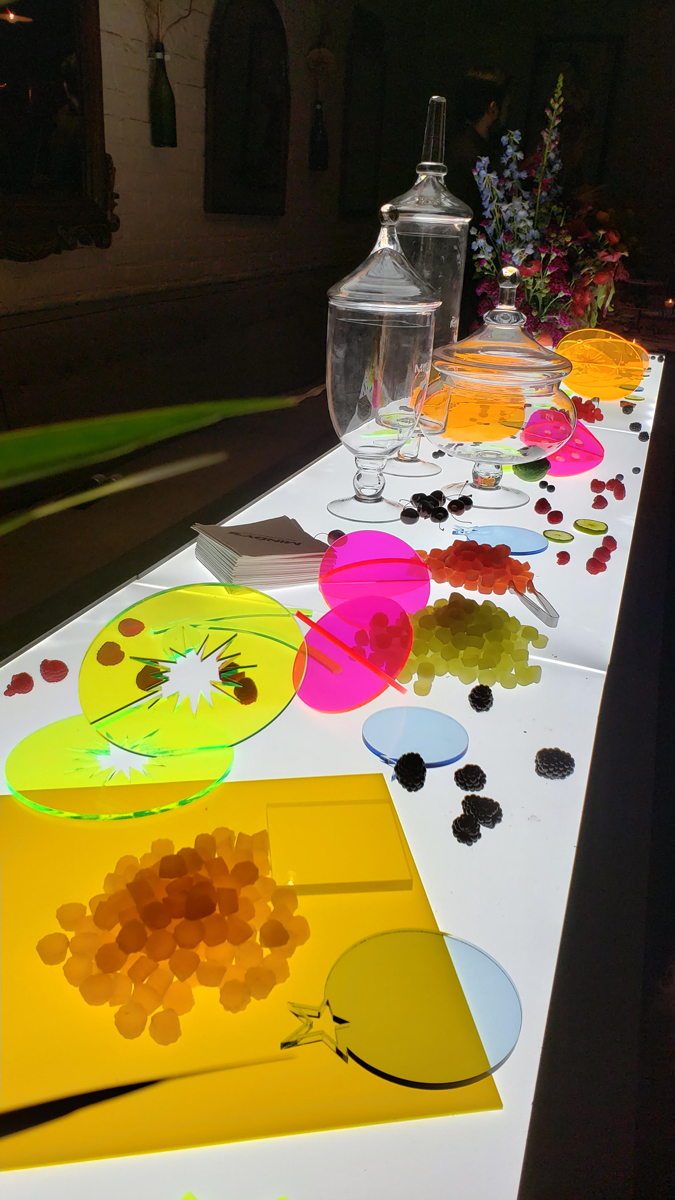 Next, she invites her food and beverage team made up of around 10 people, including Cresco Director of Food Science Stephanie Gorecki, to her restaurant to eat her desserts “because it’s the only way that I can explain to people how intense I want the flavors,” Segal explains. Then, Segal teams with Gorecki, who works to capture the flavor profiles and recreate them into the respective edible forms. Segal will then taste them, give feedback, and they’ll continue to tweak until the final product accurately reflects the nuances of the dessert that inspired the flavor.

“Even though I am an advocate for cannabis, and I partake in cannabis, it wasn’t like I was doing it for that sort of reason,” she explains. “I was doing it for the business aspect of it, for the learning opportunity and for the chance to get my brand to other people. And to have them have flavors that they never thought they could have in the cannabis industry.”

While others may follow Segal into the legal cannabis-infused food scene, it’s not an easy endeavor with the learning curve and navigating legal hoops. “We have a good culinary community,” Segal says. “Chicago is very vibrant and there’s a lot of young chefs popping up … I think it’s exciting. Everything has to have a change, everything has to have growth and I’m excited to see what’s going to happen in the culinary community and who is going to get involved in the cannabis. [But] it’s a very hard process, it’s not like you wake up one day and then you decide that you want to be in the cannabis industry.”

And there’s reason to believe that Chicago may be at the forefront of the edibles food scene. In addition to Segal’s early foray in the then nascent edibles industry, there’s also programs like Cresco Labs’ Social Equity & Educational Development Program (SEED), which assists social equity applicants by providing resources and guidance towards applying for Illinois dispensary licenses. Plus, the edibles industry continues to skyrocket. Cannabis analytics firm Headset Inc. reported that the edibles share of the cannabis market grew from 10.5 percent to 12 percent in 2019. In the wake of COVID-19, Headset compared the daily sales of cannabis products pre-pandemic (January 1st through March 6th) to the increase in sales during the crisis (March 7th through March 31st). It found that average daily sales of cannabis products across the board increased by 10 percent, but of the categories that had average daily sales that surpassed the market at large — edibles, beverages, and flower — edibles were the clear frontrunner with 28 percent growth. Mindy’s Chef Led Artisanal Edibles’ gummies popularity have also increased, selling 8.5 times more gummies in the past year than in 2016, the year they launched.

Before recreational cannabis sales became legal in Illinois on January 1st, Chicago area supper club events, such as those hosted by Herbal Notes or members-only A Table for Twenty, were already taking place around the city. But now that any stigma that may have existed around cannabis is dissipating and the legality in Illinois and elsewhere has opened to the general public, the opportunity for more culinary innovation is ripe in Chicago. “I do think there’s gonna be more dinners and chef collaborations and I can tell you that I am looking forward to helping with that,” Segal says. “I haven’t done any dinners yet, so I’m looking forward to that.”

Segal’s edibles reach goes beyond Illinois, too — they’re currently available in Nevada, California and Massachusetts, with plans to expand to Michigan and Arizona soon. As Segal grows her brand, she’s excited for what’s to come, including her hope of exploring the use of terpines in her future edibles formulations.

“I think that we’re in a renaissance period right now, where it has to do with general, medicinal qualities of cannabis. I mean even though it’s been hundreds of years that we’ve known about cannabis, I think now we have the technology to do research and understand all of the medical benefits, not only THC/CBD and then the two combined. And specifically from not only the hemp plant but the cannabis plant,” she says. “And I think we have a lot to learn about terpines and a lot to learn about where it comes from, because terpines are everywhere. So, learning this, I think is a great. I think it will be great for us in the future, and especially what we can do and how we can utilize the plant.”