Billie Eilish put on a busty display as she attended the Met Gala on Monday evening.

The 20-year-old Grammy winner embraced her buxom cleavage as she showed off her outfit’s corseted detail while posing on the red carpet.

Eilish’s outfit appeared to be one of the rare few that actually followed the theme of ‘gilded glamour’ harking back to some of the fashions that were popular in the late 1800s. 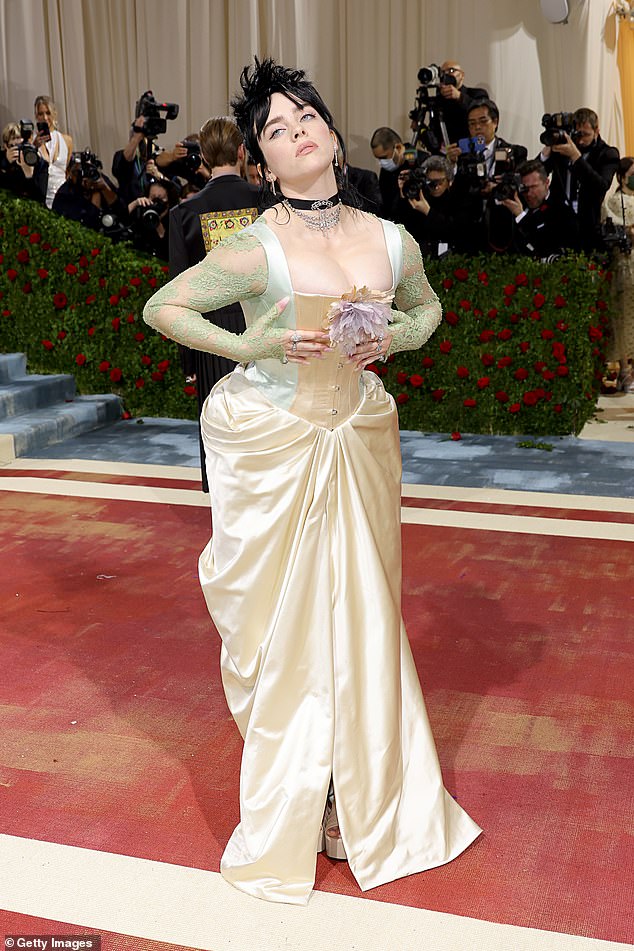 Buxom! Billie Eilish shows off cleavage in silk corset gown that fits perfectly with the ‘gilded glamour’ dress code at the Met Gala

The stylish ensemble certainly wouldn’t have looked out of place on HBO’s drama The Gilded Age.

The bad guy singer put a gothic twist on the look with her messy black hair styled in an updo, while sporting a black choker around her neck.

Officially called the Metropolitan Museum of Art Costume Institute Benefit, the star-studded event is considered by many as the ‘Super Bowl of celebrity red carpets.’

Fashion’s biggest night is traditionally held the first Monday in May to raise money for the Costume Institute in New York City, with last year’s event moved to September due to the pandemic.

This year’s dress code is ‘gilded glamour’ to match the theme of ‘In America: An Anthology of Fashion,’ a continuation of last year’s ‘In America: A Lexicon of Fashion.’ 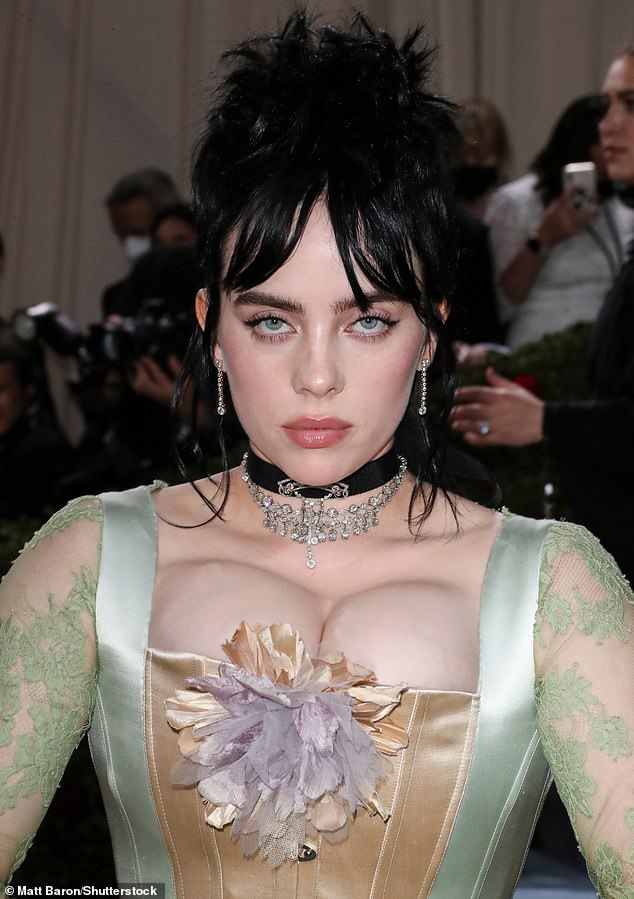 Wow: The 20-year-old Grammy winner embraced her buxom cleavage as showed off her outfit’s corseted detail while posing on the red carpet 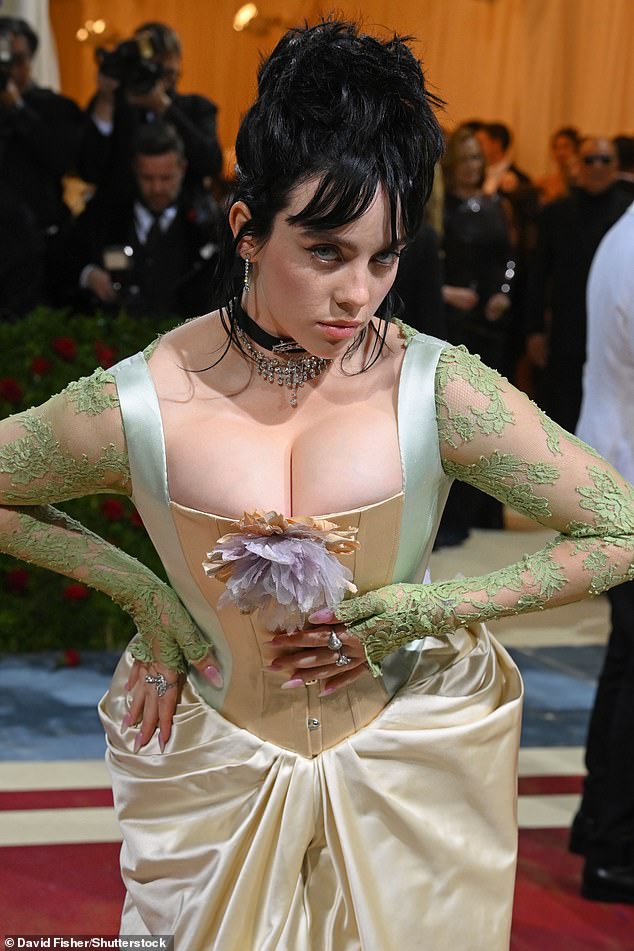 Scoring points: Her outfit appeared to be one of the rare few that actually lived up to the theme of ‘gilded glamour’ and harked back to some of fashions that were popular in the late 1800s

This will be Miranda’s first time as a Met Gala co-chair (and guest) but he was originally intended to co-host the 2020 edition before the pandemic forced its cancellation.

Striking: The bad guy singer put a gothic twist on the look with her messy black hair styled in an updo, while sporting a black choker around her neck 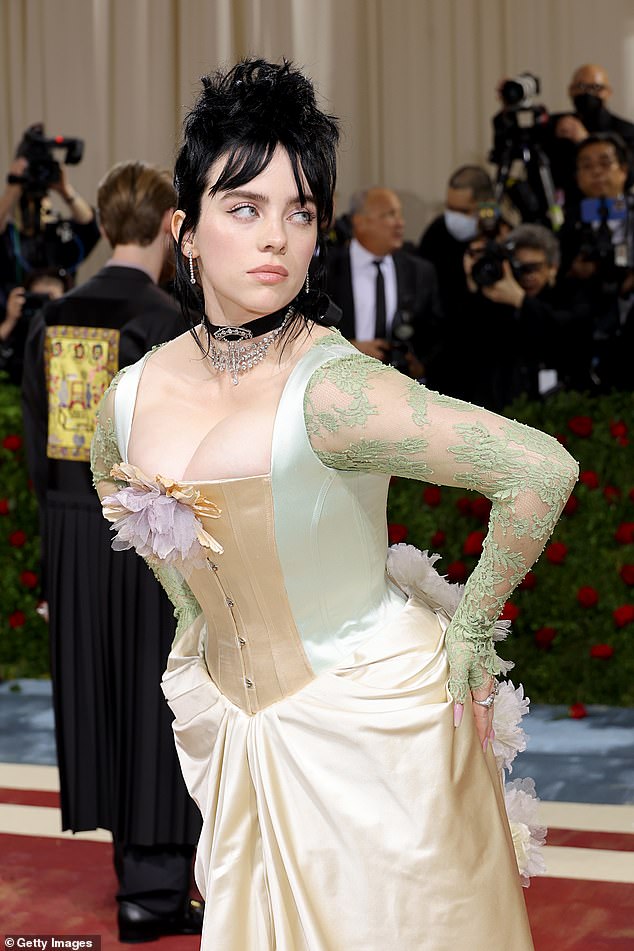 Detail: The ensemble featured green netted sleeves and a flower attached at the bust

Vogue editor-in-chief Anna Wintour is once again supervising the benefit as chairwoman, a position she’s held since 1995. Her fellow honorary co-chairs are designer Tom Ford and Instagram head Adam Mosseri.

As usual, the sartorial theme comes from the exhibit the gala launches: ‘In America: An Anthology of Fashion,’ which is the second of star curator Andrew Bolton’s two-part show exploring the roots of American style. 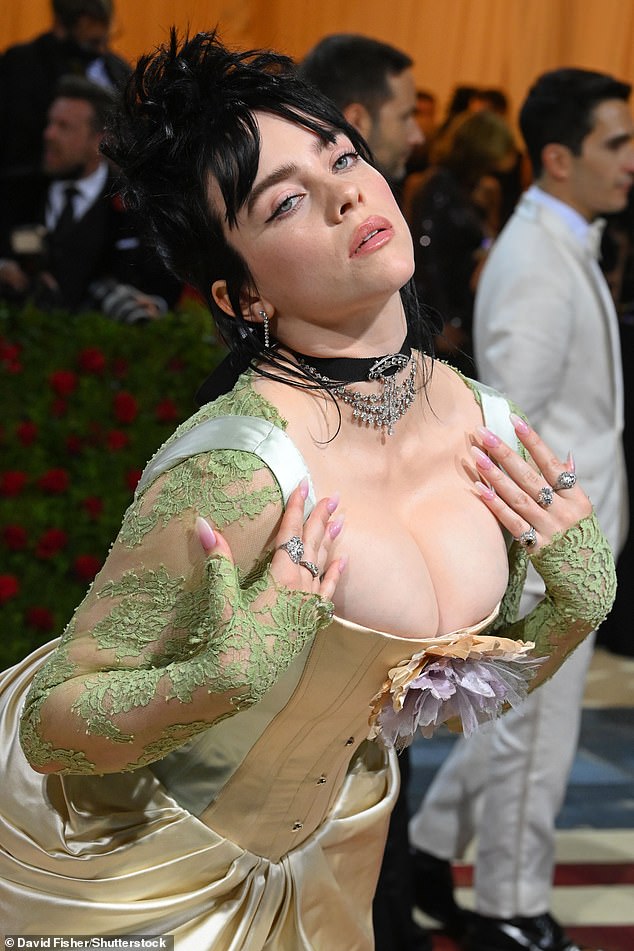 Oozing glamour: The singer appeared to be enjoying her time on the red carpet 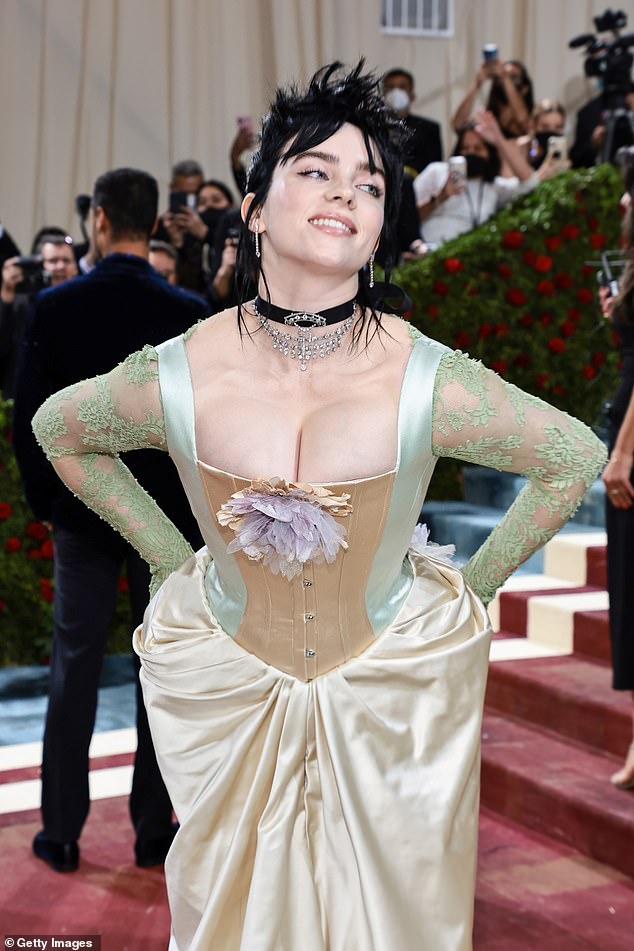 Breast dressed: Billie showed off her cleavage as she arrived at the MET Gala

Bolton said eight directors will create what he called ‘cinematic vignettes’ in the period rooms of the American Wing of the museum.

Similar to the September event, there will be 400 guests this year, lower than the pre-pandemic highs of 500-600 attendees.

The other four are Ford, the celebrated fashion designer who’s also an acclaimed film director, Janicza Bravo (Zola), Julie Dash (Daughters Of The Dust) and Autumn de Wilde (who directed the Jane Austen adaptation Emma. and is also a photographer).

The first part of the exhibition will remain on display in the rooms of the Anna Wintour Costume Center, along with the second part, until September 5.

More than half the pieces in the opening exhibition will be rotated out and garments from designers not yet featured will go on display.

The Met Gala is a huge money-maker for the museum, and provides the Costume Institute with its main source of funding.

Brother and sister duo: Both Billie Eilish and Finneas O’Connell arrived at the event together