Mission: Impossible 7<\/em> Has Most Dangerous Stunt for Tom Cruise

Tom Cruise’s Mission: Impossible 7 features “by far the most dangerous stunt we’ve ever done,” according to writer-director Christopher McQuarrie.

During CinemaCon in Las Vegas today (August 26), the audience saw the first footage of Cruise’s stunt for the next installment of the Mission: Impossible franchise and it was met with an audible reaction, Entertainment Weekly reports.

The stunt sees Cruise ride a motorcycle off a large ramp atop a cliff, launch off of the bike and parachute safely to the ground. The crew told CinemaCon that the stunt involved 500 hours of skydiving training, 13,000 motorcycle jumps, and months building the ramp in Norway.

McQuarrie told the crowd: “The only thing that scares me more is what we have planned for MI8.” 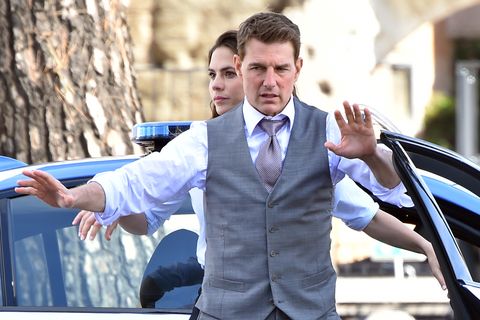 Teasing this stunt several months ago, Cruise told Empire Magazine: “If the wind was too strong, it would blow me off the ramp. The helicopter [filming the stunt] was a problem, because I didn’t want to be hammering down that ramp at top speed and get hit by a stone.

“Or if I departed in a weird way, we didn’t know what was going to happen with the bike.

“I had about six seconds once I departed the ramp to pull the chute and I don’t want to get tangled in the bike. If I do, that’s not going to end well.”

Photographs from the set have shown Cruise as Ethan Hunt pulling off a number of gravity-defying stunts for the new film. One included him on the roof of a moving train.

Despite the exciting stunt updates, the movie has faced a number of challenges filming during the pandemic. In June, it had to halt production after at least one of the cast and crew members tested positive for Covid-19. It shut down shooting in the UK for 14 days.

Paramount Pictures said in a statement: “We are following all safety protocols and will continue to monitor the situation.”

Cruise was previously caught reprimanding crew members on set for breaking coronavirus restrictions. He later defended his rant, saying “there was a lot at stake at that point” and that after his rant filming was “never shut down again”.