Molly-Mae Hague sizzles in leather corset amid furore over giveaway

They shot to fame after coupling up on Love Island and going on to land numerous big brand deals .

And Molly-Mae Hague, 21, looked sensational as she put on a sultry display in a leather corset ahead of causing a furore when she revealed the winner of her £8k giveaway on Monday.

The beauty’s latest social media offering comes as it was revealed her beau Tommy Fury earned £3,000 a day last year through his two companies, reports The Sun. 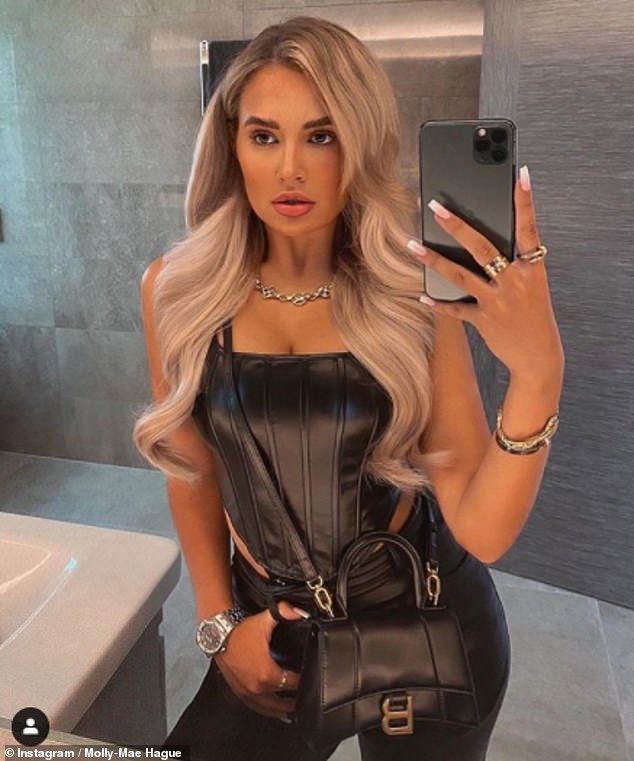 Looking good: Molly-Mae Haugue looked sensational as she put on a sizzling display in a black leather corset top during a date night on Sunday amid a furore over her £8k giveaway results

Molly-Mae, who was slammed by some online after only using 25 of the more than 2m entries to pick a competition winner, exuded confidence as she snapped a mirror selfie while on a night out on Sunday.

Posing up a storm, the reality star placed one thumb through her leather trouser’s belt loop and stuck her hip out to one side to accentuate her killer curves.

She also emphasised her ample assets in the black corset top which gave a glimpse of her toned and tanned sides.

To complete her stylish ensemble, Molly-Mae donned a selection of gold jewellery including a chain necklace and several large rings. 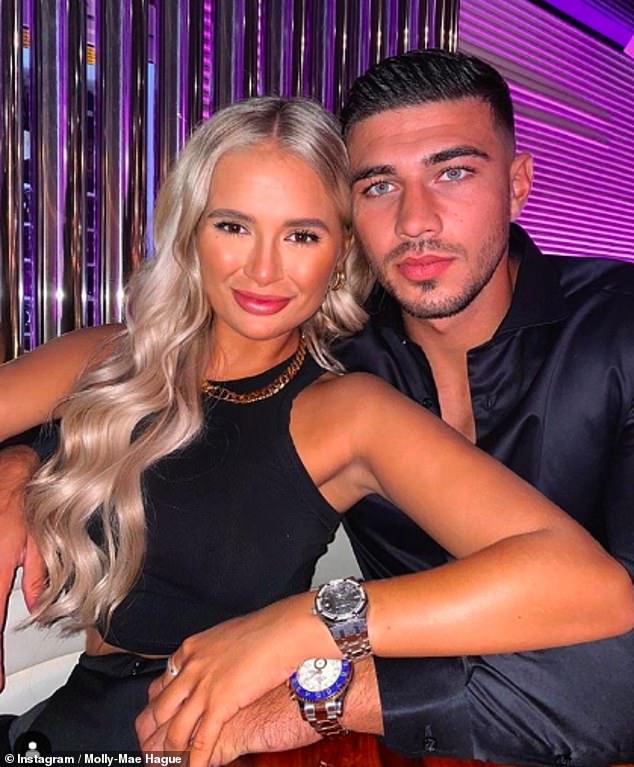 Power couple: It comes as it was revealed Molly-Mae’s beau Tommy Fury earned £3,000 a day last year through his two companies after their successful stint on Love Island

While her date for the evening Tommy wasn’t seen in the snap, he also had reason to celebrate after it was revealed his two companies netted him nearly £3K a day last year.

While a filing for the business made at Companies House, revealed this worked out as a profit of £2,308 a day.

Tommy also runs company Tommy Fury TNT, which he’s had since before his Love Island days. This had brought in an impressive £151,294 profit by January of this year. 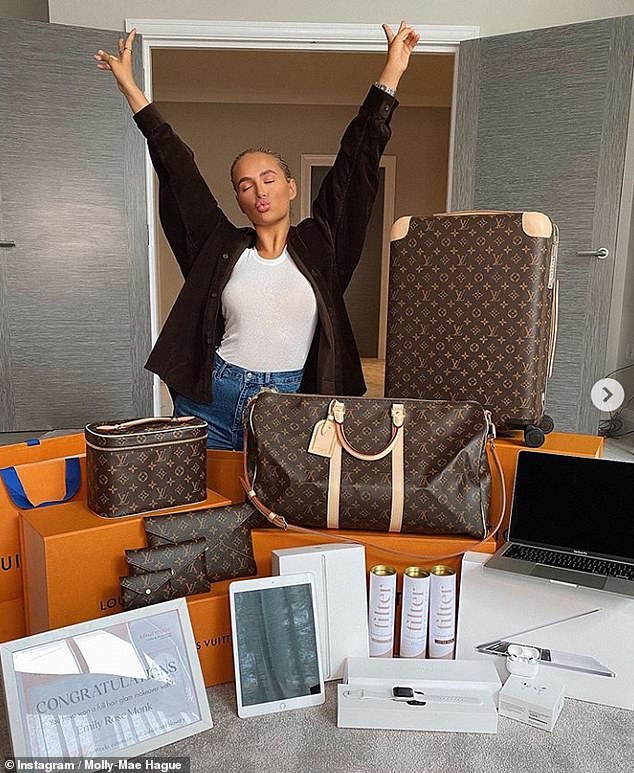 ‘Let’s all be happy!’ Molly-Mae was forced to defend the method she used to select the winner of her £8,000 designer bag giveaway on Monday

When the figures were broken down across 281 days, it meant the hunk made £538 per day – bringing his total daily profits for two companies to £2,846.

Since leaving Love Island Tommy has worked with a number of brands including Boohoo man and has shared content for McDonald’s and Disney Plus on Instagram.

He’s also taken part in a three-part ITV show with fellow Islander Curtis Pritchard which is thought to have added a healthy sum to his earnings.

It comes after Molly-Mae, who has also worked with numerous brands since her stint in the villa, was forced to defend the method she used to select the winner of her £8,000 designer bag giveaway on Monday.

The star took to Instagram to reveal she and her management spent last week deciding how to choose the lucky fan, and settled on putting 25 ‘random’ entries into a generator after more than two million people took part in the competition. 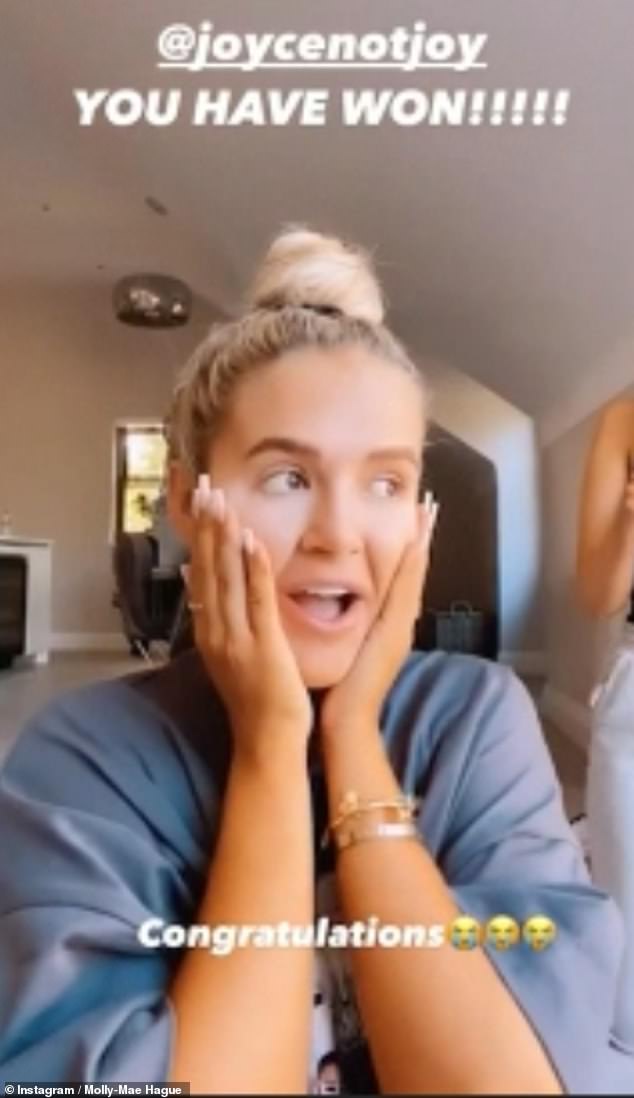 Controversy: The Love Island star, 21, revealed she and her management settled on putting 25 ‘random’ entries into a generator after over two million people took part in the competition 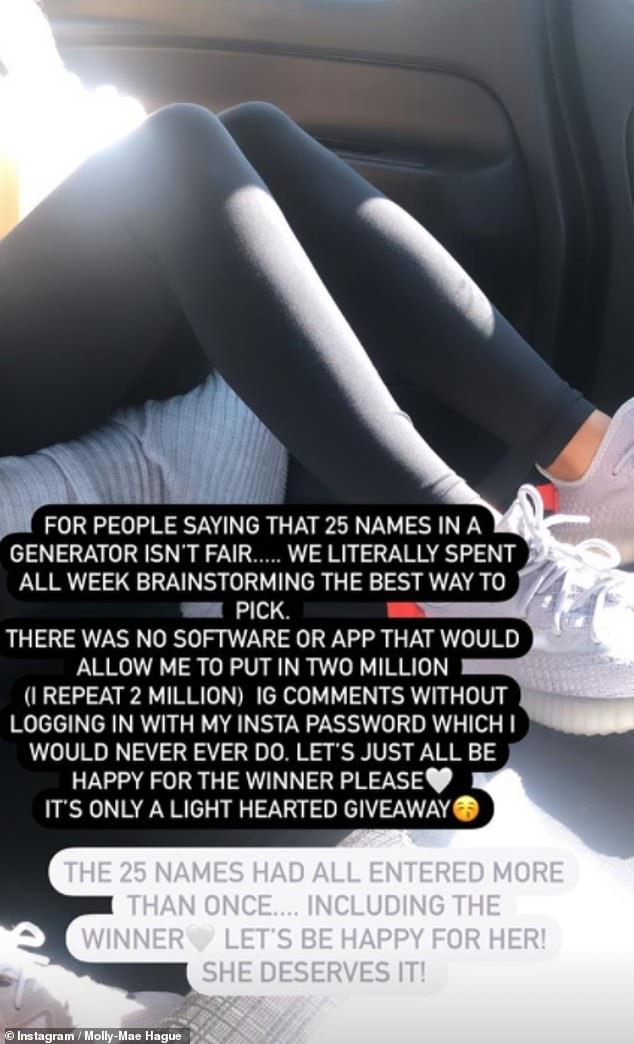 ‘It’s light hearted!’ As many social media users branded her technique ‘lazy’, the influencer claimed she couldn’t record all participants on the site without putting her account at risk

As many social media users branded her technique ‘lazy’, the influencer claimed she couldn’t record all participants on the site without putting her account at risk and urged fans to ‘be happy’ for the champion, who goes by @joycenotjoy on the platform.

The reality TV star, who opened the competition to celebrate earning one million YouTube subscribers earlier this month, went make-up free as she detailed her selection process.

Molly-Mae said: ‘Okay guys the moment is finally here, I’m just going to keep my phone up so you can see, it’s totally legit.

‘To pick the giveaway winner, we’ve come up with several ideas, but what we’ve done is pick 25 random people from the giveaway. We’re going to put 1-25 in the generator and whatever number is pulls out, that’s going to be the winner!’ 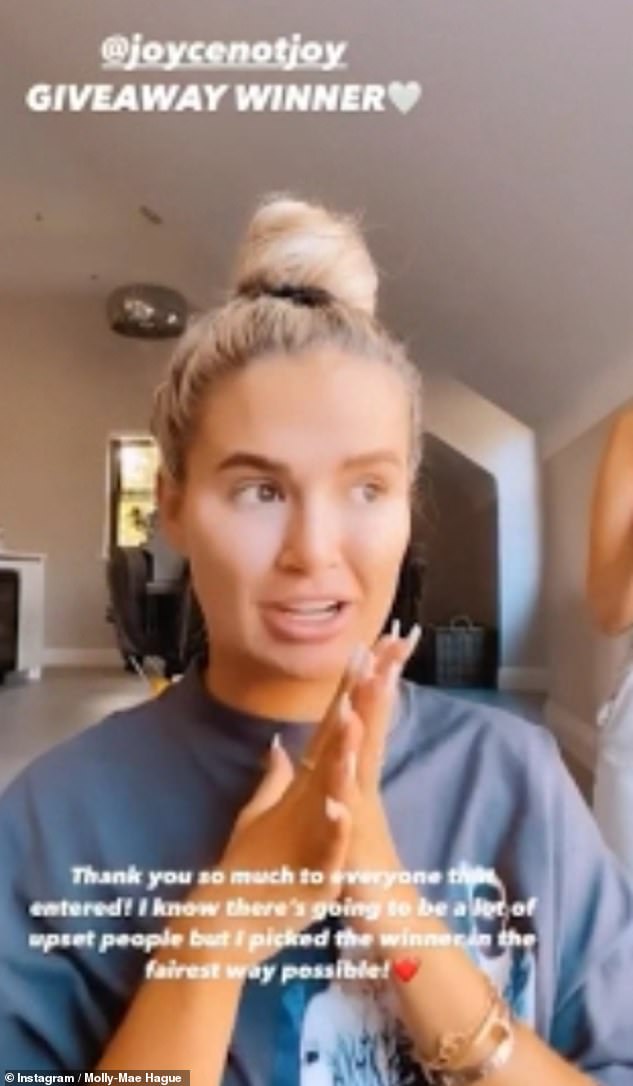 ‘The moment is here’: The reality TV star, who opened the competition to celebrate earning one million YouTube subscribers, went make-up free as she detailed her selection process

Showing viewers her laptop, the media personality went on: ‘Let’s just do it then. I’m going to press the generator. Number 5 is @joycenotjoy you’ve just won my giveaway.

‘Thank you so much to everyone that has entered, please don’t be upset if you didn’t win. I love you all.’

Some fans took to Twitter to express their disappointment at losing the chance to scoop the massive haul of goods – including Louis Vuitton bags.

They wrote: ‘I mean I knew I was never going to win @mollymaehague giveaway. however only picking 25 people out of the millions that entered seems soooooooooo unfair. Or am I just being a scrounge?! 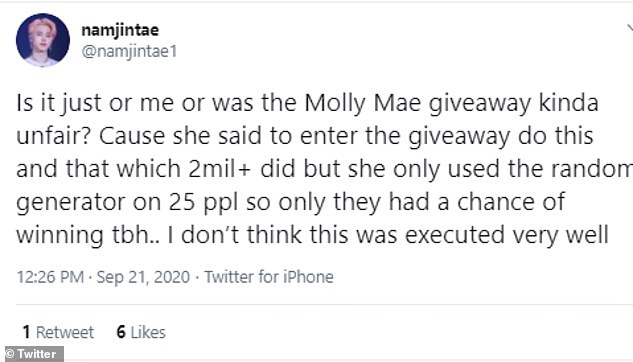 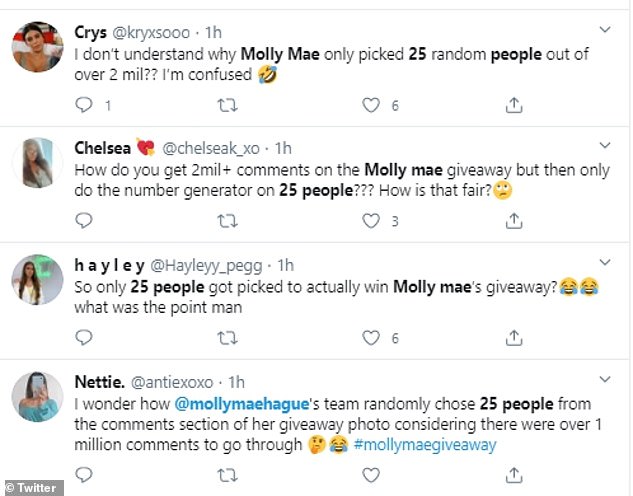 ‘I don’t think this was executed very well’: Some fans took to Twitter to express their disappointment at losing the chance to scoop the haul of goods – including Louis Vuitton bags

‘Is it just or me or was the Molly Mae giveaway kinda unfair? Cause she said to enter the giveaway do this and that which 2mil+ did but she only used the random generator on 25 ppl so only they had a chance of winning tbh.. I don’t think this was executed very well.

‘How do you get 2mil+ comments on the Molly mae giveaway but then only do the number generator on 25 people??? How is that fair?

Support: Others said naysayers should be grateful as they insisted the ‘sweetheart’ has been one of the only celebrities that have created such an impressive giveaway

‘what a scam Molly Mae’s giveaway was. nearly 3 million entries and she only picks 25 people to put in the random name generator lmfao.

Others said naysayers should be grateful as they insisted the ‘sweetheart’ has been one of the only celebrities that have created such an impressive giveaway.

They penned: ‘Why are people moaning about how Molly Mae picked the winner Rolling on the floor laughing Stop being so sore and be happy for the girl that won ffs 2 million people entered what did you expect.

‘Really baffles me how salty some people are about loosing @mollymaehague giveaway. 1. She did sth most celebs would never do and we should appreciate her for that 2. Be happy for someone else, it really isn’t that hard

‘Molly Mae is such a sweetheart idc I’m still keeping my follow.’ (sic)

The TV star stood by her further as she added in a separate post following the backlash: ‘For people saying that 25 names in a generator isn’t fair… we literally spent all well brainstorming the best way to pick. 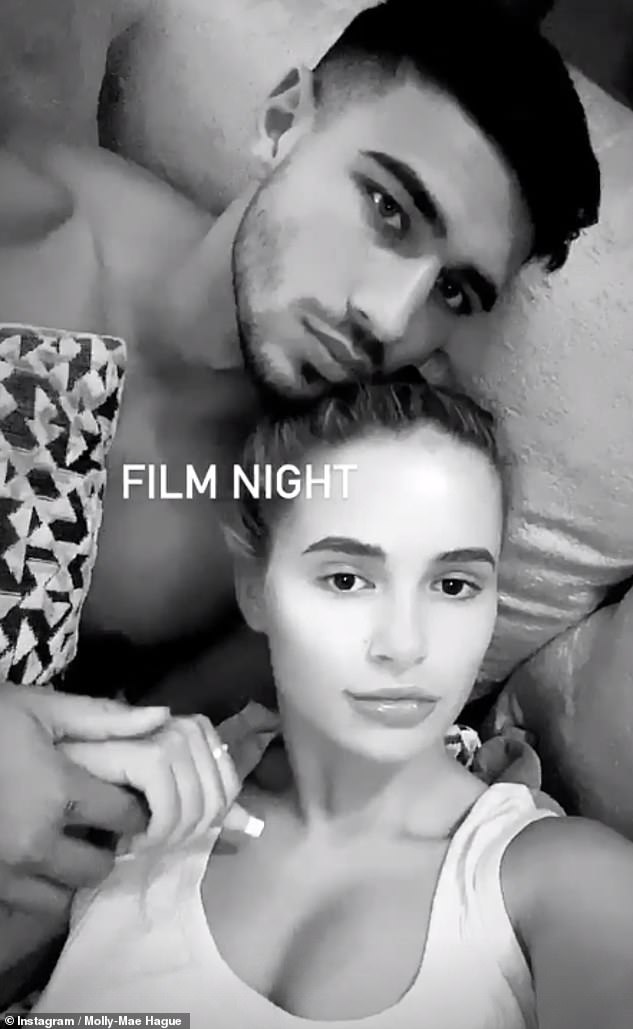 ‘Film night’: The loved-up pair ended their evening by watching a movie together in bed

‘There was no software or app that would allow me to put in two million IG comments without logging in with my insta password which I would never ever do.

‘why am I scrolling through the all the tweets about molly mae and seeing people mad that she only picked from 25 people … like she still picked those 25 from the 2 million it’s literally not unfair lol ?

‘Let’s just all be happy for the winner please. It’s only a light hearted giveaway. The 25 names had all entered more than one… including the winner. Let’s be happy for her! She deserves it.’ (sic)