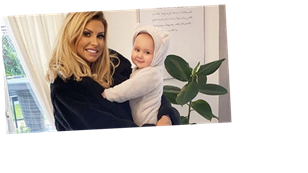 Mrs Hinch AKA Sophie Hinchcliffe has spoken out on Instagram after a troll told her that she has spoiled her son, adding “spoiled brats are not nice”.

The pregnant star, 30, who previously told the trolls to “leave her alone” after they made a cruel meme about her, was criticised for giving her son Ronnie some presents in lockdown.

On her Instagram story, Sophie, who is expecting her second child with her husband Jamie, gave her fans an insight into the types of comments she receives regularly.

“There are two types of people in this world…,” she wrote, before sharing one of the kinder messages she received.

“Aw he’s going to make such a good big brother I remember panicking when I was having no2 boy… so many worries but Sophie is will all come naturally to Ron trust me.. mine are 24 and 22 now yeah we had rough patches but they’re bond is strong… xxxx.”

Mrs Hinch added: “Kind people,” alongside the first comment, before sharing the cruel remark: “He’s a spoiled wee brat. Sorry but he is.

“He should not be getting your unless it’s birthday of Xmas. He will not be a coper when this baby arrives.

"Don’t care how much you say he’ll be a good big brother. You’ve spoiled him into a brat and he’ll hate having to share you.”

They continued: “You’ve made a rod for your own back so he’ll mend you. I’m a child counsellor and I have to be straight and honest. He is one spoiled boy and that is all your fault.

“So, get on with it when baby arrives. He is going to kick off and it’s all your fault.

"You haven’t a clue. Spoiled brats are not nice.”

In another post, Sophie addressed the comment with grace as she told her fans to rise above the negativity.

“Goodnight everyone. Remember you have no control over who people think you are,” she shared.

“So don’t worry about it.

"If they want to hate some fictional version of you that exists in their mind let them.

“Don’t drain yourself winning over people you can’t win over."

The mum of one finished off by writing: "Keep your cup full. Go where the kindness is.”