Olivia Jade speaks out for the first time in eight months

Lori Loughlin’s daughter Olivia Jade keeps her cards close to her chest as she speaks out for the first time in eight months in new Youtube video: ‘I’m legally not allowed to speak on anything going on right now’

Olivia Jade is speaking out for the first time in almost a year since her parents Lori Loughlin and Mossimo Giannulli were part of the college admissions scandal earlier this year.

In the video on Youtube, she starts off by saying, ‘Obviously I have been gone for a really long time.’

‘As much as I wish I could talk about all of this, it’s really hard for me to say this because I know that it’s something that needs to be addressed. It’s just unfortunately which is also why I didn’t know when I should come back to Youtube. The reason for that is because I’m legally not allowed to speak on anything going on right now.’ 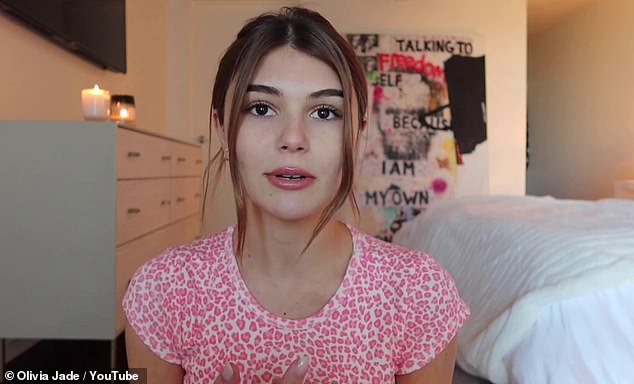 She’s back: Olivia Jade is speaking out for the first time in almost a year since her parents Lori Loughlin and Mossimo Giannulli were part of the college admissions scandal earlier this year

The 20-year-old former influencer addressed what she could while speaking out about operation varsity blues in which her parents have pled not guilty as their part in the crime.

‘A part of me is like ‘Should I come back to Youtube right now?’ she continued while sitting in a new bedroom that appeared to be different than the chic mansion she grew up in.

‘It’s been so long and I actually really really miss it. I genuinely miss filming and I feel like a huge part of me is just not the same because it’s something I am really passionate about and something I really like to do.’

She continued: ‘But I also didn’t know and debated for seven or eight months like well if I can’t talk about it is there a point in coming back? And not being able to say anything. I want to come back because I want to come back. There is no point in me just talking for 10 minutes to the camera about how I wish I could say something when I really can’t. So, I’m going to leave it at that.’ 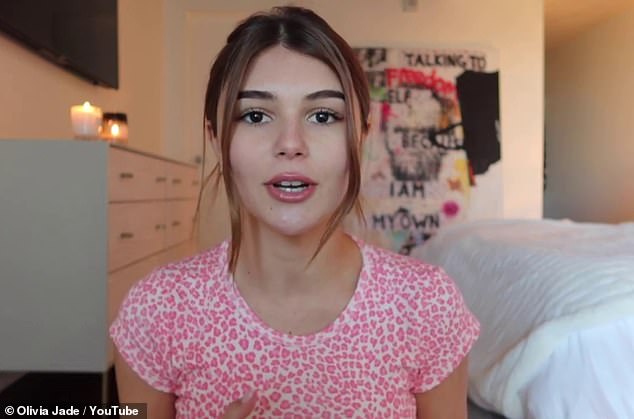 Here’s what she can say: The 20-year-old former influencer addressed what she could while speaking out about operation varsity blues in which her parents have pled not guilty as their part in the crime 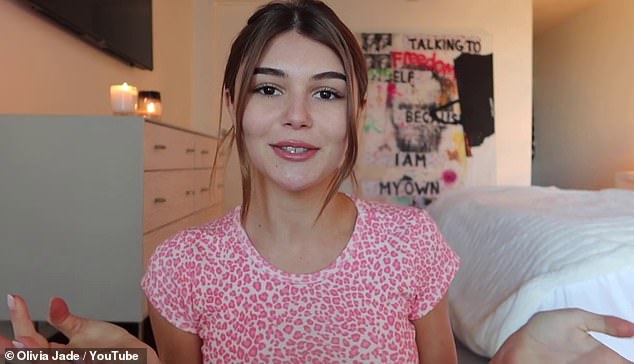 Coming back: During the video, she revealed that she is ready to come back to Youtube with more of her lifestyle vlogs coming ‘soon’

At the end of the video, she thanked her subscribers for ‘sticking around’ before saying this is the ‘best she can do.’

Olivia went on to say that she ‘wants to move on with her life’ and said she is ‘terrified to make this video and come back.’

The youngest daughter to Lori then revealed more of her vlogs will be coming back soon with a little message at the end of the video that said ‘Thank you for watching. I’ll see you soon.’ 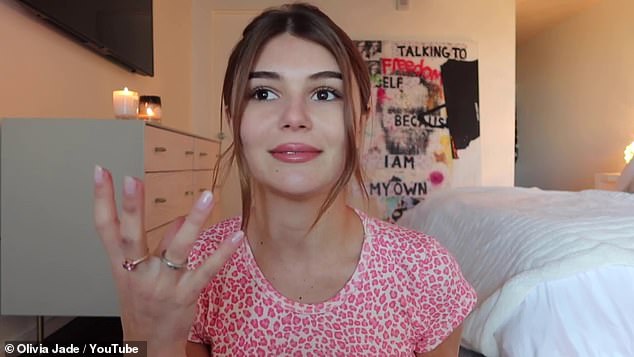 Thank you: She went on to thank her fans for sticking by her side for the last eight months as she stayed silent 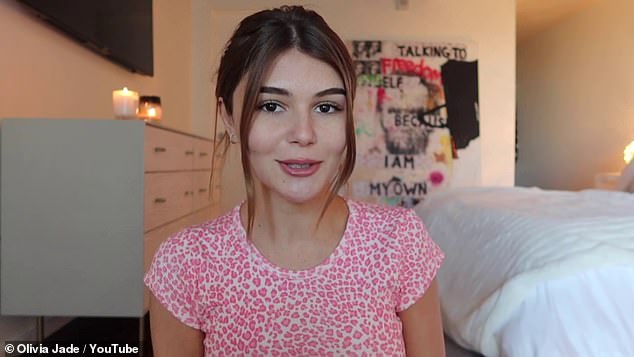 Moving forward: At the end, she said she is ready to ‘move on’ with her life as she tries to move past the scandal 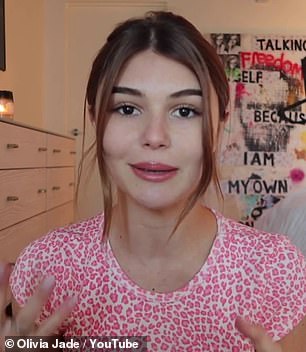 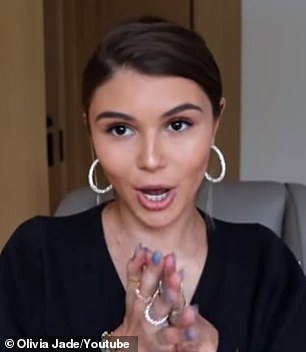 New studio: Olivia sat tight on the floor of a bedroom with candles lit in the background and a statement piece of art that looked vastly different from her bedroom at her parent’s house in which she had her own filming studio

After the news broke of the scandal, Olivia halted her Youtube channel and went radio silent on social media.

Shortly after, her handful of brand deals started to slip away as companies like HP, Sephora, and fashion retailer Lulus all ended their contracts with the star.

‘HP worked with Lori Loughlin and Olivia Jade in 2017 for a one-time product campaign. HP does not currently have a relationship with either of them,’ the company said in a statement in the wake of the scandal. 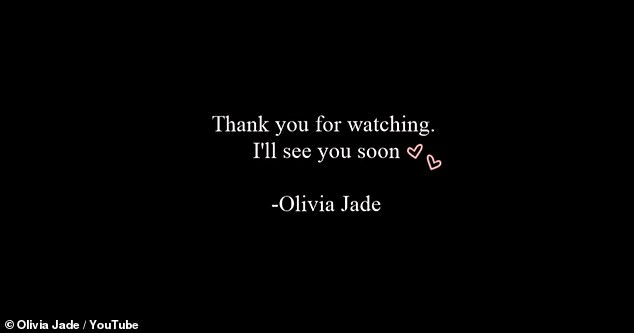 More to come: Olivia promised fans she would be back soon

Meanwhile, her parents are just weeks away from their trial date with up to 60 years in prison on the table for their crimes.

Initially, the couple was arrested and charged in March for paying $500,000 to get both Olivia and their other daughter Bella into the University of Southern California as rowing recruits.

Neither Olivia or Bella row. 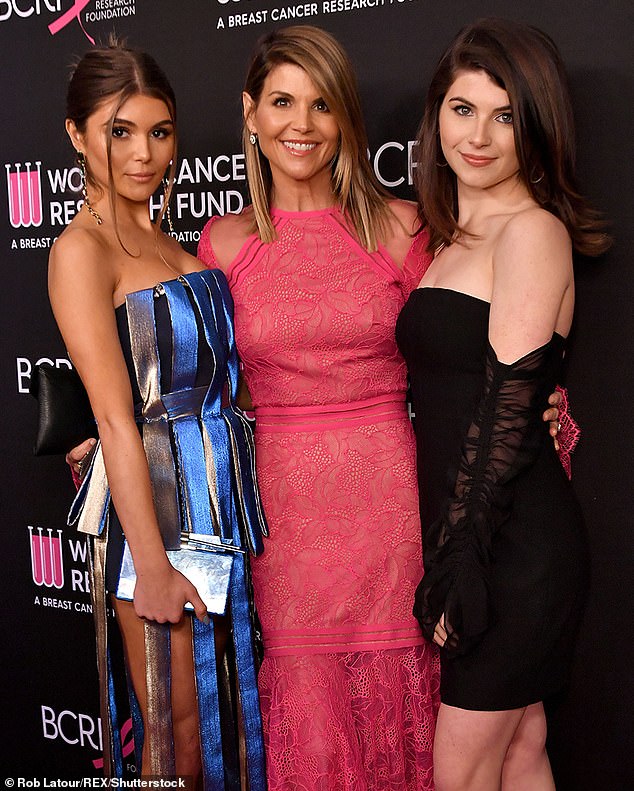 Loving mother: Lori Loughlin is pictured above with her daughters Olivia and Bella while attending the Women’s Cancer Research Fund event in Los Angeles in February

In October, things took a turn for the worse when Lori and her husband were slapped with with additional charges including: mail fraud, money laundering and bribery.

The Full House alum was said to have considered pleading guilty, but was talked out of it buy her husband.

The two are said to be watching the jail sentences of the other parents involved in the crimes. 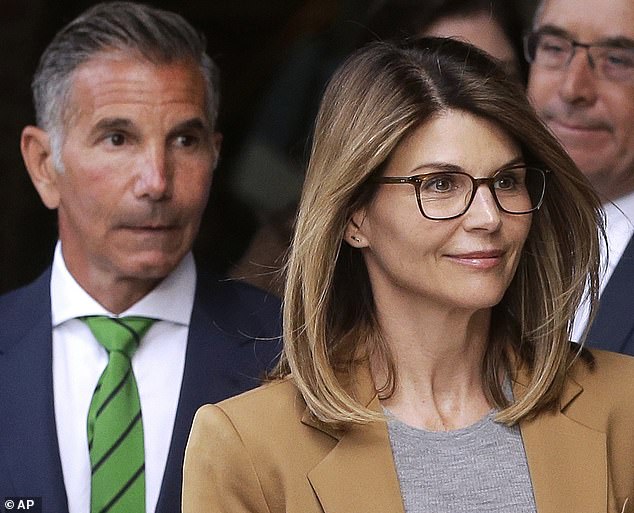 Getting worse: In October, things took a turn for the worse when Lori and Mossimo Giannulli were slapped with with additional charges including: mail fraud, money laundering and bribery. They are pictured above leaving court in Boston after their lawyers entered their not guilty pleas

Fellow actress Felicity Huffman recently finished up her two-week jail time for paying $15,000 to have her daughter’s SAT scores altered.

Toby MacFarlane was sentenced to six months in prison for his involvement in the scandal after pleading guilty to one count of conspiracy to commit mail fraud and honest services mail fraud.

He was ordered to pay about $82,000 in back taxes and interest to the IRS after he lied about his son’s height for the basketball team and designated his daughter as a soccer player. 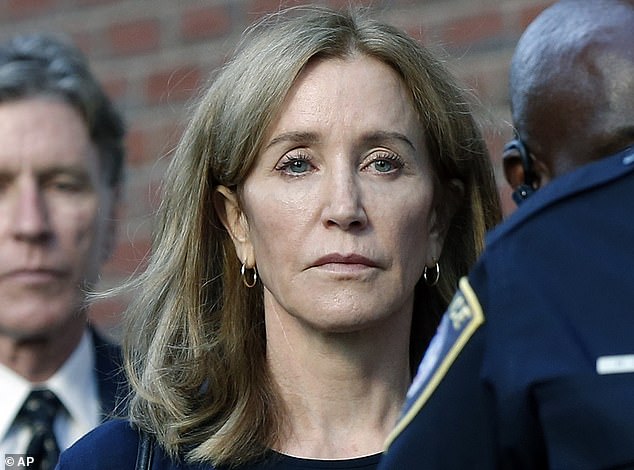 Light at the end of the tunnel: Actress Felicity Huffman is back home after serving her 14 days in jail for her involvement in the scandal. She is pictured above in September leaving federal court 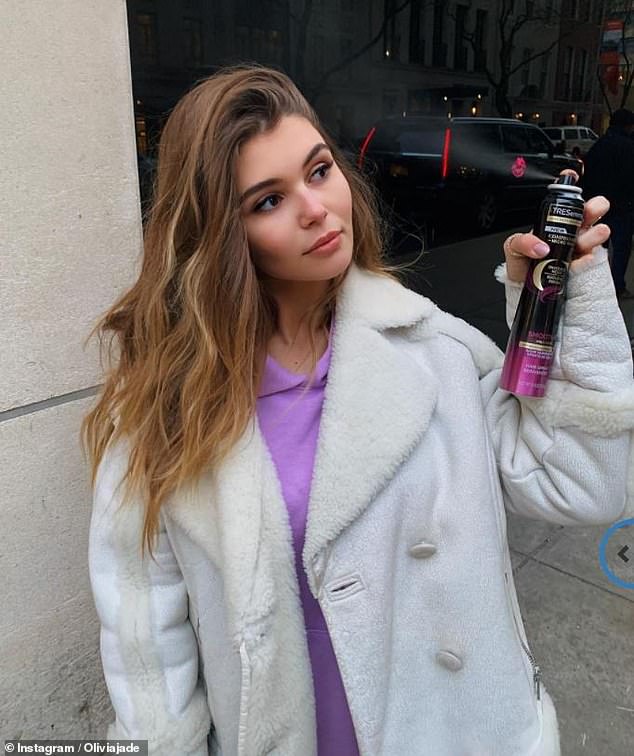 Dropped: Tresemme was yet another brand to drop the internet star. She shared this picture of herself promoting the brand before the news broke