The Oscars were a unique kind of train-wreck this year, but if you were rubbernecking to look at mixed up categories and “In Memoriam” travesties, you may have missed a big hint of a possible relationship.

Paris Jackson and Cara Delevingne celebrated the evening together, and looked fab together.

Paris was draped in a white Monique Lhuillier gown, giving her a classic Old Hollywood look — except for the tattoos of course. (More on that in a moment!) Cara meanwhile rocked a Ronald Vanderkemp tuxedo top, black gloves, and pants styled by Rob Zangardi. So fierce.

See them together (below):

But it wasn’t the linked arms that got us wondering if this is a rekindled flame rather than just friends hanging out. It was what was drawn on those arms… Among the other pics of the evening on her Instagram Story, Paris shared a photo in which the lovely ladies showed off matching tattoos! 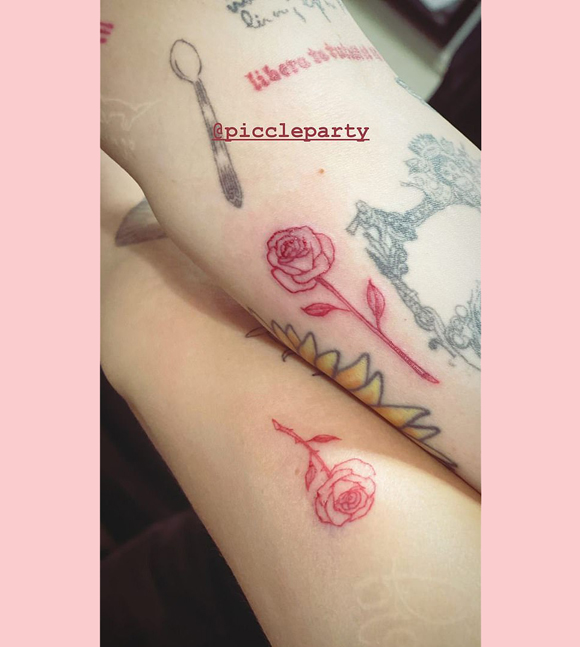 In case you’ve forgotten, these two were romantically linked for a brief, glorious moment back in 2018. Several months after meeting at the MTV Movie Awards the previous year, the two — who had both recently gotten out of relationships — started to seem inseparable.

Then we actually saw them making out on the street in March 2018, confirming fans’ wildest shipping dreams!

So far as we know, both women are single yet again. Paris broke up with longtime boyfriend Gabriel Glenn last year. And in an interview perfectly timed just as she was getting back on the market, she explained her sexuality was unclassifiable:

“I don’t feel like there is a label for my sexuality that fits. Labels in general, not just for sexuality but for everything, I think, are just ways for humans to make sense of the world, to be able to compartmentalize … We’re getting past the need for labels. It’s beautiful.”

That certainly left the door — and window — open for all sorts of suitors. Though obviously we’re sure the quarantine got a bit in the way of meeting new people. Enter… an ex-girlfriend?? Cara is also recently single. She and longtime girlfriend Ashley Benson split last Summer as well. While the Pretty Little Liars alum quickly moved on with G-Eazy, the supermodel has remained a super free agent.

Did the stars align for the two eligible bachelorettes to get back together? Or are they just the kind of BFFs who get matching ink?