Ladies, beware Alpha males. Since time immemorial they’ve been nothing but trouble — all the more so when they’re robed in wealth or power.

Henry VIII was a good example of one such who was well worth avoiding, as the West End musical Six makes triumphantly clear.

But Alpha malpractice has an ignoble history that goes right back to Greek mythology — as illustrated in another show, The Seven Pomegranate Seeds in Kingston upon Thames.

Six, however, has a lot of fun on the subject. Part pop concert, part beauty pageant, it’s a mock-Tudor Love Island, fusing The Spice Girls with Horrible Histories as Henry’s six wives go head to head to see who got the worst treatment. Or as Toby Marlow and Lucy Moss’s amusing lyrics put it ‘you’re gonna find out how we got unfriended’. 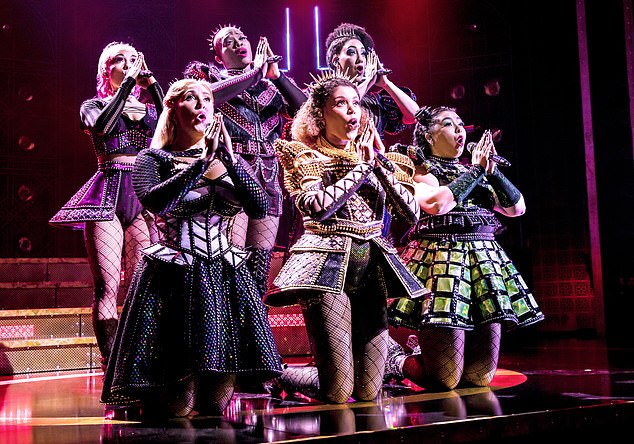 The best song remains the toe-tapping title number (‘He got down on one knee, but I said: ‘No way-ay!’). And singer Jarneia Richard-Noel moves on with sassy Beyonce-style defiance as Catherine of Aragon, before Collette Guitart (playing Jane Seymour on the night I saw) turns on the taps with an Adele-ish Heart of Stone.

But, it was Courtney Bowman’s Anne Boleyn who won my vote for the hardest luck story in Don’t Lose Ur Head. As she keeps reminding us, it’s tough to top decapitation (so to speak).

Otherwise this is wall to wall synthetic pop, including the house-music number Haus of Holbein which turns on Eurovision pastiche. And to finish the 80-minute set, Hana Stewart’s Catherine Parr gives us a Hamilton-ian power ballad by way of Alicia Keys in I Don’t Need Your Love. 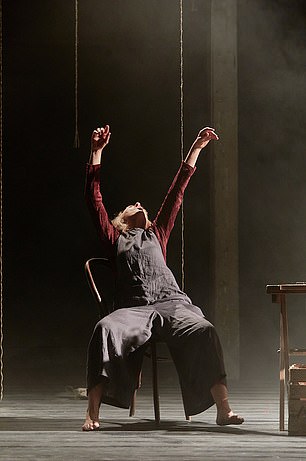 None of this, I confess, blew back what’s left of my hair. But if you’re bringing a house of howling women to their feet night after night, as these ladies do, you must be doing something right. More girl-power to their elbows!

Niamh Cusack stars alongside an arresting new young talent in the shape of Shannon Hayes in a much more serious take on the suffering and defiance of women down the ages. It is Colin Teevan’s The Seven Pomegranate Seeds, reconnecting Greek myths to modern scenarios.

They start with the story of Persephone, here abducted from the Yorkshire moors into the underworld by the god Hades. Other stories include that of Alcestis the devoted wife who now agrees to be an organ donor for her husband, and the gaslighting of Medea in the Midlands.

Director Melly Still weaves these yarns into an austere but absorbing production exploiting the Rose’s stark, warehouse-like stage as if it were a space outside time. The threads of the stories are mirrored by strings suspending props on stage, but also reaching from seats to ceiling in the auditorium, making the theatre look like a weaver’s loom.

Projections on a screen of baking parchment at the back of the stage only really distract. It’s the acting that rightly dominates, with Cusack and Hayes (playing all the roles, male and female) complementing each other nicely. Cusack is a loose, impulsive, high-energy actor; Hayes is simple, controlled and direct.

You have to work a little to make connections suggested and camouflaged by Teevan’s writing, but what emerges is a sense of hope and faith in human resilience.

The man behind the moustache

Verdict: Beyond the Belgian

To sofa-dwellers, David Suchet — Sir David for a year now — is the living embodiment of Inspector Poirot.

But there is more to Suchet than the moustachioed Belgian detective, as he reminds us in what is less a show than a scripted interview with his old chum, Geoffrey Wansell.

He twinkles, just like Poirot, but is more expansive, jumping up to perform the soft-shoe shuffle that his granny, a music-hall dancer, once showed him.

She and his mum were thrilled he followed her onto the boards. His Harley Street gynaecologist father less so until he joined the Royal Shakespeare Company. 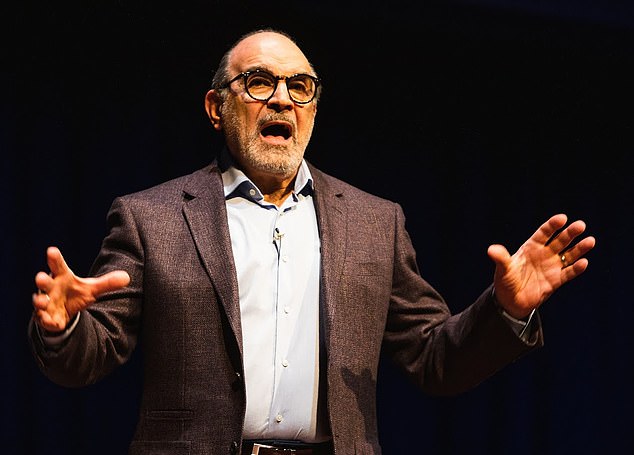 To sofa-dwellers, David Suchet — Sir David for a year now — is the living embodiment of Inspector Poirot. But there is more to Suchet than the moustachioed Belgian detective, as he reminds us in what is less a show than a scripted interview with his old chum, Geoffrey Wansell

Suchet admits the death of Poirot after 25 years and 70 episodes was like ‘killing off my best friend’. But there is little soul-searching and no backstage back-stabbing. Instead, gleeful re-enactments, best of all Prince Philip’s expert demonstration of how to peel a mango, which Suchet decided was pure Poirot and wrote into an episode.

And when he turned up in his rugger strip to his first movement class at drama school and was issued with a leotard and ‘dance belt’ — a brave new world to this public schoolboy.

In a brief masterclass, Suchet demonstrates how to take emotional cues from Shakespeare’s iambic pentameter.

His way into Poirot was developing the mincing walk by holding a coin between his bum cheeks, a trick borrowed from Laurence Olivier.

But the key into any character for Suchet, is finding the voice. Poirot, he explains, doesn’t really exist from the neck down, so he decided he must push his voice up, up, up to make him what Agatha Christie describes as a ‘walking brain’. Et voila! A delight.

Poirot And More, A Retrospective is on tour until December 19, 2021, and then at the Harold Pinter Theatre in the West End from January 4-22, 2022 (davidsuchetonstage.com).

Spooky ride on a wave of emotion

The Ocean at the End of the Lane (Criterion Theatre, London)

Childhood is a time when, for many of us, we had to figure out the hidden rules of a sometimes hostile world.

That, I think, is the fascination of this beguiling show based on Neil Gaiman’s fantastical and semi-autobiographical cult novel about his own childhood, which has now transferred to the West End after opening at the National Theatre in 2019.

Adapted by Joel Horwood, it does take a little while to find your feet in this labyrinthine, shapeshifting story.

It is, though, in essence a tale of bereavement — about a boy still grieving the death of his mother who discovers that a farmhouse near his home is a portal to another universe filled with monsters trying to raid our human dimension. Katy Rudd’s ingenious production is both scary and enchanting as stage hands conjure furniture and operate a huge spider-like monster that emerges from pitch darkness.

There are spine-tingling illusions as actors disappear and reappear unexpectedly, and moments of pure Hammer Horror — including a bloody hand reaching out of a bathtub. 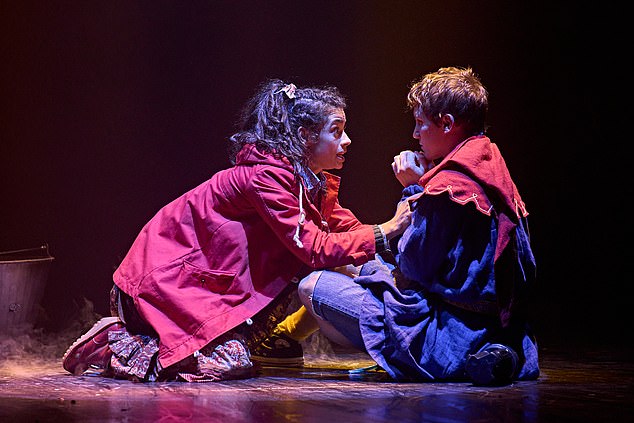 Fly Davis’s set has a spooky, fairy-tale quality, too, on a stage fringed with curly brushwood like an engraving from a children’s story book. And Jherek Bischoff’s electronic music adds pulse-quickening drive to the spectacle.

For all the show’s illusions and special effects however, Gaiman’s story rests on its emotional power. That’s thanks to a terrific cast including Nia Towle as the girl with special powers who befriends our young hero, and James Bamford as her physically adept but emotionally vulnerable charge, caught between psychological and supernatural forces.

Laura Rogers chills the blood as the alien lodger who moves into the family home and tries to take possession of the boy’s soul, while Nicolas Tennant is engagingly cuddly yet weirdly sinister as his dad.

All of which adds up to a show that’s best for kids of secondary school age or over.