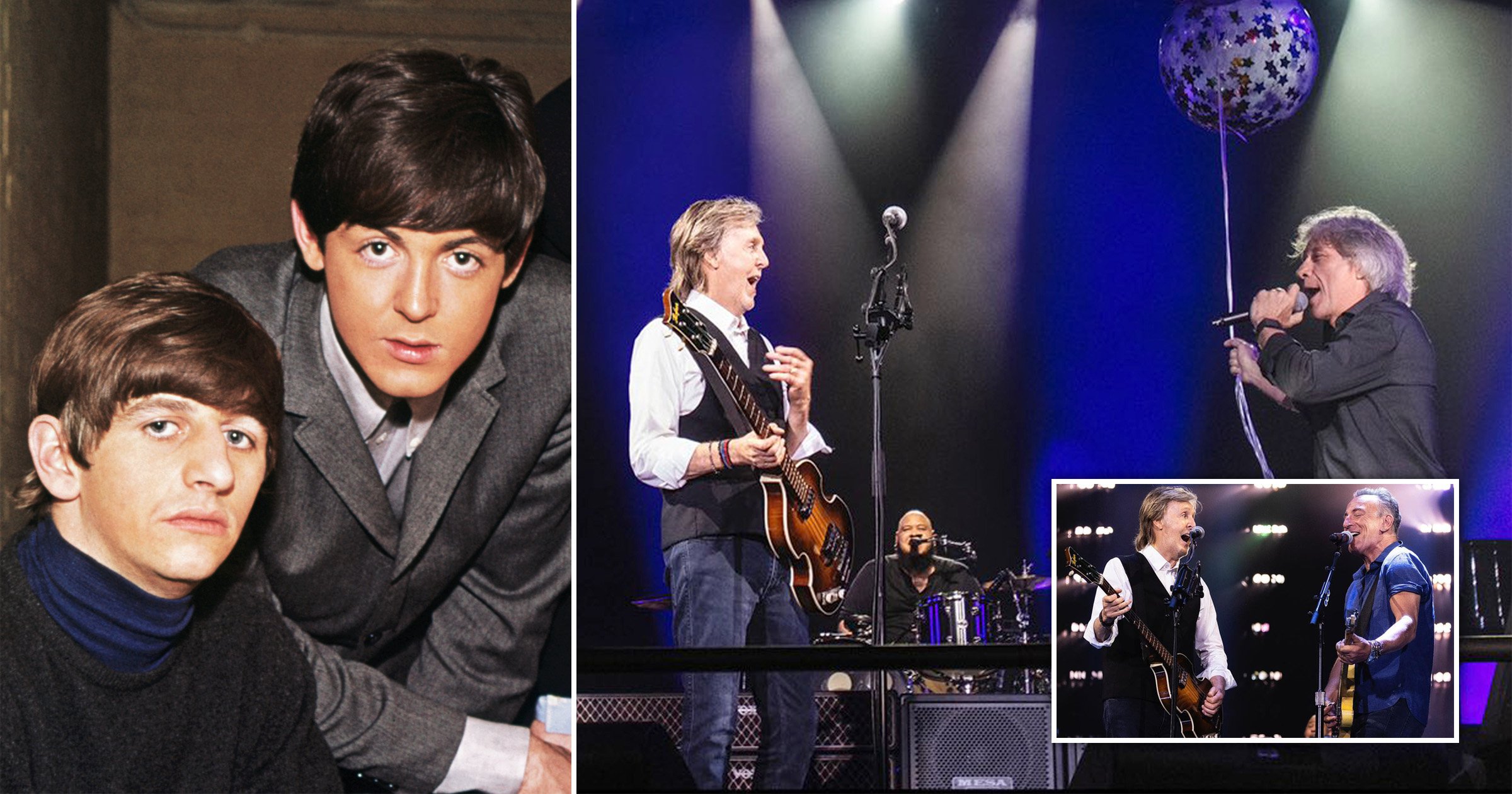 Sir Ringo sent his customary ‘peace and love’ well wishes to his long-standing friend and former bandmate on Saturday, his actual birthday, joining the throngs marking his milestone with birthday greetings, ahead of the star headlining Glastonbury next weekend.

The drummer, who turned 80 himself last year and this week was forced to postpone the end of his US tour after Covid diagoses in his team, also shared a photo where he flashed a ‘V’ sign for peace.

Sir Paul has been celebrating his birthday while on his Got Back tour in the US, and on Thursday was joined on stage by rock star Jon Bon Jovi – carrying balloons – in New Jersey, who sang Happy Birthday to him with the help of some 50,000 fans.

Referencing that performance, former UK prime minister Gordon Brown tweeted: ‘I think we would all like to sing Happy 80th Birthday to @PaulMcCartney today. My friend Jon Bon Jovi doing it in style here.’

Following Bon Jovi’s surprise appearance at the MetLife Stadium, New Jersey’s own Bruce Springsteen also took to the stage to jam a few songs with Sir Paul, including Glory Days.

‘Here’s to 80 more years of glory days,’ Springsteen announced to the crowd at the end of his appearance.

Next Saturday, Sir Paul will become Glastonbury’s oldest ever solo headliner when he takes to the Pyramid stage. He also topped the bill at the Somerset music festival in 2004.

Rolling Stones guitarist Ronnie Wood, who recently turned 75, shared a series of photos of him and Sir Paul together throughout the years.

The Twitter account of bandmate George Harrison, who died in 2001, posted footage of Sir Paul taken by the late musician, while John Lennon’s account posted pictures and a happy birthday message ‘from Yoko, Sean and everyone at Studio One’.

American singer-songwriter Carole King shared a photo of her embracing Sir Paul, which she captioned: ‘Happy birthday @paulmccartney. Welcome to the 80s.’

Sir Paul is a long-standing supporter of People for the Ethical Treatment of Animals (Peta) and the animal rights group also paid tribute to his work on Twitter.

‘We love seeing you advocate for animals, and strive for ethical change! Thank you for raising awareness of the #SaveCrueltyFreeCosmetics European Citizens’ Initiative.’

To mark the occasion, four unsigned musicians performed at the childhood home of Sir Paul in Liverpool.

The National Trust, who look after 20 Forthlin Road, hosted The Forthlin Sessions on Friday with the recordings playing out on his birthday on Saturday.

The acts – Serena Ittoo, Humm, Emily Theodora, and Dullan – featured in a 16-minute video posted to the trust’s YouTube account.

The McCartney family moved to the house in 1955 and within a year their mother Mary died, leaving her husband Jim to raise 14-year-old Paul and his 12-year-old brother Mike alone.

During his career, Sir Paul’s awards have included 18 competitive Grammys, an OBE, and being inducted into the Rock And Roll Hall Of Fame twice.

In 2017, he was appointed a member of the Order of the Companions of Honour, a special award granted to those who have made a major contribution to the arts, science, medicine or government.

The father-of-five has been married to Nancy Shevell since 2011.