Paulina Gretzy has stunned in a gorgeous brown bikini in Beverly Hills. She posed in the sunshine while rocking a matching straw cowboy hat.

Paulina Gretzky is ready for summer! The blonde beauty took to Instagram on March 23 to share a pic of herself posing in a brown string bikini. “Bug a Boo,” she captioned the sizzling snap, tagging Caviilou, a custom hat store based in Los Angeles. The 32-year-old model threw her blonde tresses behind her shoulders as she leaned back, while sitting on a deck overlooking the Beverly Hills skyline. While lapping up the sunshine, she stayed protected in a brown, straw cowboy hat and accessorized with gold necklaces. “Unreal!!” Summer House star Paige Desorbo commented, while hundreds of others dropped heart eye and flame emojis.

The post comes just a few weeks ahead of the 2021 Masters, where her pro-golfer fiance Dustin Johnson, 36, will defend his title. The couple openly hugged, kissed and cried as their emotions ran high when Dustin won the 2020 Masters in November — the second major championship of his career. The athlete recently opened up about Paulina’s golfing skills. “She’s actually pretty dang good for someone who doesn’t play or definitely doesn’t practice,” he said in the latest issue of Cigar Aficionado, noting that she plays golf “about 10 times a year.”

Paulina, who is the daughter of hockey legend Wayne Gretzky, 59, has been around sports her whole life. “I didn’t appreciate golf as much when I was little, probably because my mom put us in tennis camps and golf camps,” she said in a 2014 interview with Golf Digest. “My mom has a video of me when I was really young where I’m saying, ‘Daddy, don’t go play golf anymore.’ I just wanted to spend time with him.” 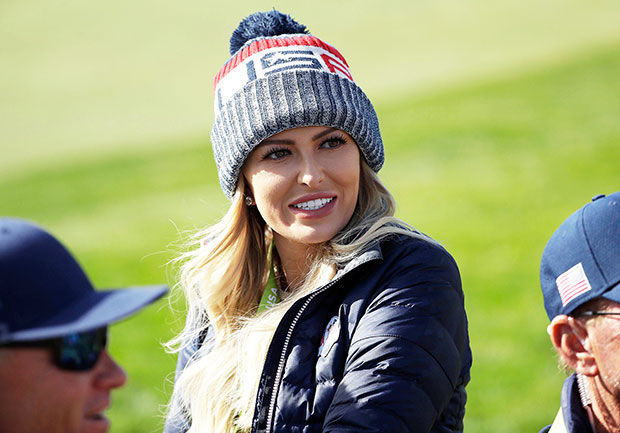 Of course, Paulina followed a different career path, and has made headlines for her modeling work. The mother of two recently flaunted her toned figure wearing nothing but a wide-brim straw hat. “je t’aime St. Barths,” she captioned the photo of herself perched on a deck wearing only the hat and a delicate gold necklace. Earlier in the week, she was also photographed wearing a white string bikini along with a silver fishnet overlay with small beading.