Phillip Schofield praises Holly Willoughby for support when coming out

‘I couldn’t have done it with anyone else’: Phillip Schofield reveals Holly Willoughby’s support when he came out as gay was ‘absolutely vital’ and she was the first person at work he told

Phillip Schofield has told how the support Holly Willoughby gave him when he came out as gay was ‘absolutely vital’.

The This Morning presenter, 58, revealed he is gay in February and spoke to his co-host Holly, 39, about coming out during a heartfelt interview.

Speaking on BBC’s The One Show, Phillip admitted Holly was the first person at work he told about his sexuality and he met up with her in a London bar to discuss how they would handle his coming out on the show. 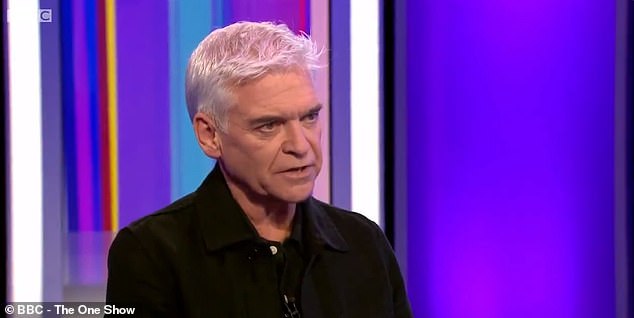 Comfort: Phillip Schofield, 59, has told how the support Holly Willoughby, 39, gave him when he came out as gay was ‘absolutely vital’

‘We had a big lead up, Holly was one of the first people I told when I knew what I had to do, she is such a wise person.

‘She has got such a calm sensitive aura to her, at home everyone was saying it’ll be fine and Holly was saying at work, “it’ll be fine”, she was the only one that knew at that time at work.’

Phillip, who was married to his wife Stephanie for almost 27 years at the time, admitted he knew there would be a ‘massive amount of scrutiny’ on him after he came out. 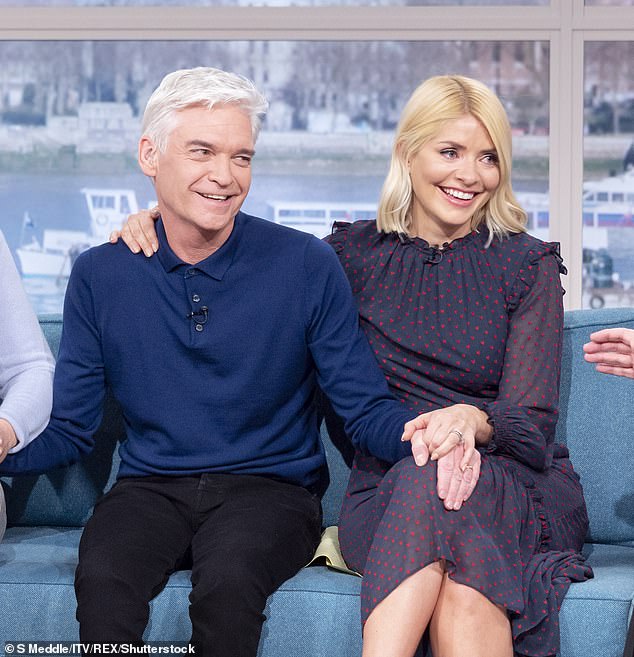 Support: The This Morning presenter revealed he is gay in February and spoke to his co-host Holly about coming out during a heartfelt interview

He said: ‘We had to figure out how to do something like that, it had to bHone public. I knew there would be a massive amount of scrutiny.

‘I said to Holly: “I’ll do it on a Thursday morning and then ill go and you carry on,” and we were in a bar in London secretly having this meeting and she said: “Are you joking? There’s no chance that you leave and I carry on.”

‘She said: “No, we’ll do it on a Friday and ask Ruth and Eamonn if we can knick 10 minutes from their show, so we do it and then both leave together.” ‘

In April, Phillip moved out of the £2 million modern rustic property near Henley-on-Thames in Oxfordshire and is living in a central London apartment where he commutes to ITV’s White City studios. 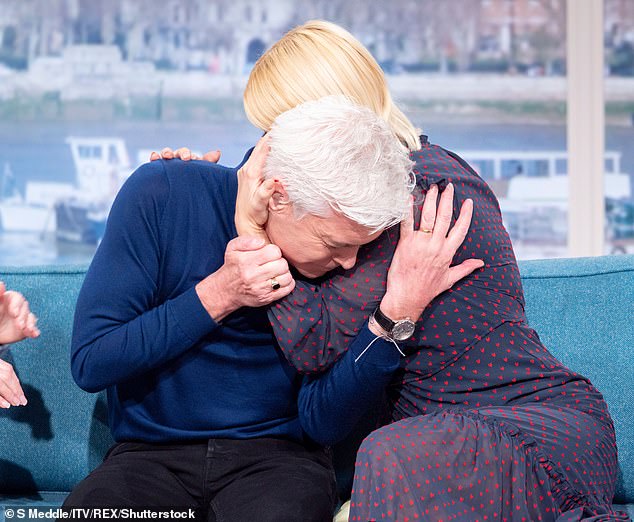 Advice: Phillip admitted Holly was the first person at work he told about his sexuality and he met up with her in a London bar to discuss how they would handle his coming out on the show

The presenter, who shares Molly, 27, and Ruby, 24, with Stephanie, previously revealed he had been leading the ‘perfect life’ after getting married and raising his two children, claiming he hadn’t wanted anything to get in the way of his happiness.

But he said he was ‘naive’ to think he could suppress his sexuality when he married Stephanie 27 years ago, and he didn’t consider his sexuality as it was such a ‘joyous time’ for him.

Phillip also admitted he battled depression as he struggled with his sexuality, and even sought therapy to come to terms with it, before deciding he found it more helpful speaking to friends in private. 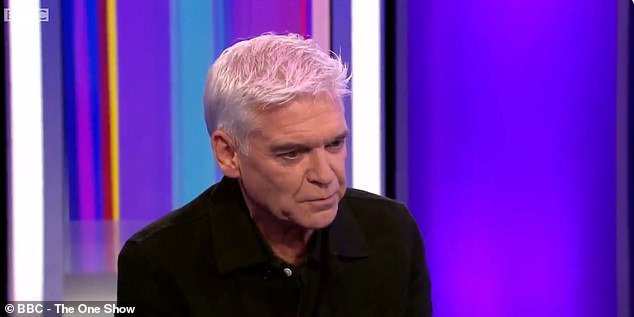 Many people unable to witness the extraordinary episode live flocked to YouTube, where the show shares snippets to its channel.

The interview has been viewed more than 6.6million times on YouTube, becoming one of the daytime programme’s most watched ever clips.

The One Show airs weekdays 7pm on BBC One and is available on BBC iPlayer. 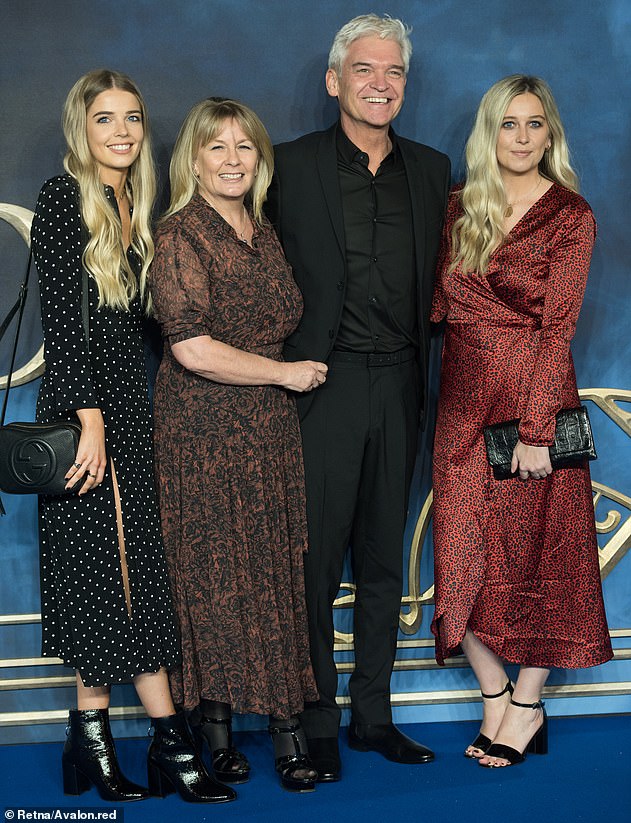 Family: Phillip with daughters Molly, 27, and Ruby, 24, and his wife Stephanie. They met when they were both working for the BBC and married in 1993 (pictured in 2018)

‘I’ve no secrets’: Full transcript from Phillip Schofield’s interview with Holly Willoughby on This Morning

‘It’s funny because, everyone I’ve spoken to, you, have all been so supportive and so loving and caring.

‘And my entire family to a person have grabbed us and said it’s OK, it’s OK, we love you, we’re proud of you.

‘And they’ve been supporting us as we got to this moment and we all knew it was coming. 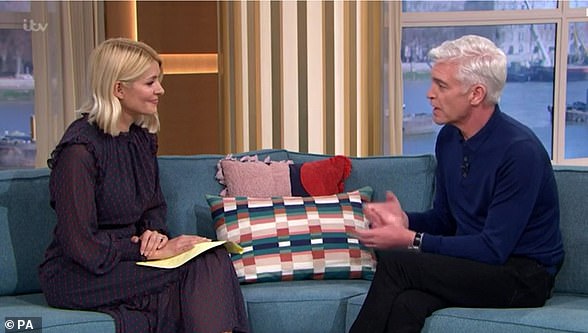 A pillar of support: TV presenter Phillip Schofield on ITV’s This Morning talking with Holly Willoughby today about his announcement that he is gay

‘So, yeah, I mean I feel a little lighter, but I’m also very aware, there’s no question that it causes pain and it causes upset. I’ve no secrets. We’ve never had any secrets. Tough, it is tough, but this is not something that’s happened quickly. I’ve had to deal with this in my head for quite some time.

‘We’ve gone through this together and we’ve been honest and we’ve been open. Steph, as I said, I can’t write in any statement what I feel about that women.

‘She is amazing, she’s incredible. There’s no one in my life who would have supported me the way, as a wife, as the way she supported me. She’s astonishing, literally astonishing.

‘It’s a good question (why now). You know this has been bothering me for a very long time and I think everybody does these things at their own speed, at their own time, when they feel the time is right. 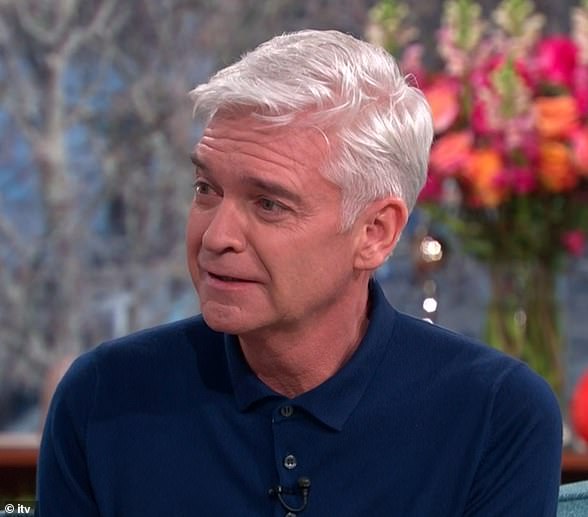 ‘I’ve no secrets’: Full transcript from Phillip Schofield’s interview with Holly Willoughby on This Morning

‘And there’s no question that it has in recent times consumed my head and has become an issue in my head.

‘This is my decision, this is absolutely my decision. It was something I knew that I had to do. And I don’t know what the world will be like now – I don’t know how this will be taken, or what people will think. 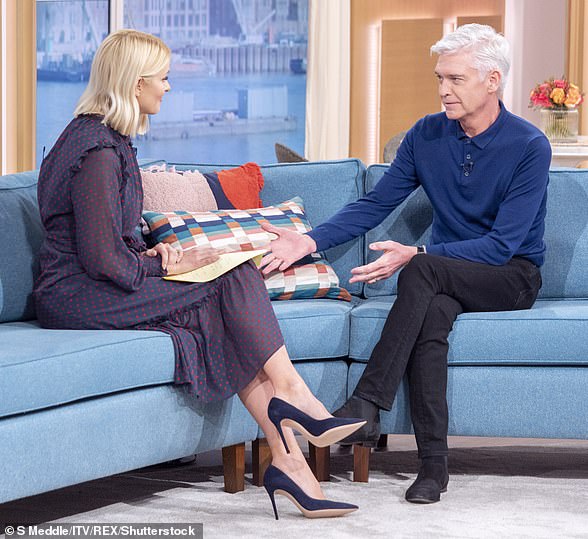 ‘But would I say is that yes, I am very conscious of the hurt, and so my overriding emotion with my family is obviously going to be guilt, because I do feel guilty that this can’t be anything other than a painful process for them.

‘I sat them down and I told them and they jumped up and they gave me a hug, a big hug, a long hug, and then they hugged Steph and they said it’s OK, we’ll be OK, we’ll always be a family, always us four, is what we always call ourselves. We’ll always be that.

‘No I don’t think so (thinking about future relationships) – I’m not thinking there. I’m doing each day at a time now, this has always been a slow process and there is no fast process after this.

‘This was the big day and this was the day that I knew everything was pointing towards and I could not have don’t it if it hadn’t been you. So afterwards I don’t know, but no, there’s no one, I’m not rushing out to anybody.’ 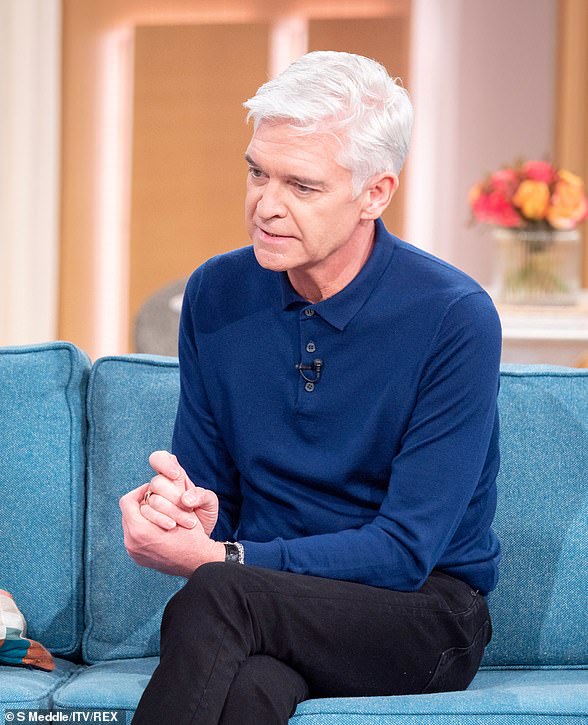 His side of the story: Phillip was open and honest during the appearance in which he chatted to his good friend