This Morning presenters Phillip Schofield, 57, and Holly Willoughby, 39, briefly joined Piers Morgan, 54, and Lorraine Kelly, 60, in the Good Morning Britain studios yesterday ahead of their show. As they touched upon the current coronavirus pandemic, Piers couldn’t resist making a witty remark about Phillip.

In reference to the Government’s advice to stay at home in a bid to combat the virus, the Good Morning Britain star took the opportunity to joke about Phillip coming out as a gay last month.

He jokingly said: “You come out and everybody goes in.”

Phillip saw the funny side to the joke and told viewers he gave the presenter that line.

He later clarified this on Twitter when a viewer highlighted the moment. 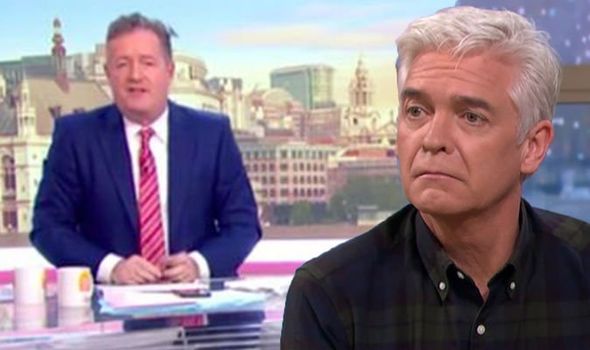 The ITV viewer tweeted: “@piersmorgan did not just say on Live TV to @Schofe ‘You come out and everybody goes in!’ WTF.

“I’m sure there’ll be complaints but it made me Laugh and Schofe seemed to find it funny!

The This Morning star replied to the tweet, writing: “I gave him the line,” followed by a crying with laughter emoji.

Phillip, who has been married to Stephanie Lowe for 27 years, announced he is gay in a lengthy statement on Instagram last month.

He began by saying: “You never know what’s going on in someone’s seemingly perfect life, what issues they are struggling with or the state of their wellbeing – and so you won’t know what has been consuming me for the last few years.

“With the strength and support of my wife and my daughters, I have been coming to terms with the fact that I am gay.”

He went on to say: “This is something that has caused many heartbreaking conversations at home. I have been married to Steph for nearly 27 years, and we have two beautiful grown-up daughters, Molly and Ruby.

“My family have held me so close: they have tried to cheer me up, to smother me with kindness and love, despite their own confusion.”

After sharing his post, he spoke further about his feelings with his Holly on This Morning.

She asked him how his wife had been coping following his announcement.

“It’s tough. But this is not something that has happened quickly. I’ve had to deal with this in my head for quite some time,” he divulged.

“And so we’ve gone through this together, we’ve been honest and we’ve been open.

“I can’t write in any statement what I feel about that woman. She is amazing.

“She’s incredible. I have never in my life, there is nobody in my life who would have supported me the way, as a wife, the way she has supported me. She’s astonishing.”

The ITV regular went on to say he hasn’t thought about a romance with anyone else.

Good Morning Britain airs weekdays from 6am. This Morning continues today at 10am.