‘Me and Ems seven years ago!’ Princess Andre cuddles stepmother Emily while sucking her thumb and napping in sweet throwback

She is the daughter of TV stars Peter Andre and Katie Price.

And Princess Andre was showing love for her wider family on Friday, as she shared a sweet throwback photo showing her cuddled up to her stepmother Emily, who was seen having a quick doze on the sofa.

The 13-year-old knelt on the floor next to the cream couch while sporting a pink fleece peppered with horses in a snap from seven years ago. 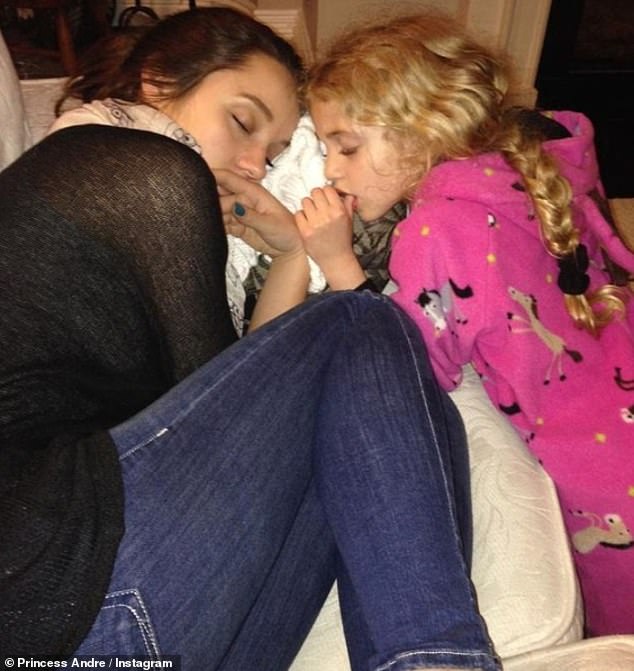 Nap time: Princess Andre shared a sweet throwback photo on Friday as she cuddled up to her stepmother Emily Andre, who was seen having a quick dose on the sofa

Time flies! The 13-year-old knelt on the floor next to the cream couch in the picture which she revealed was taken seven-years-ago

She closed her eyes for the snap and sucked her thumb while Emily, 31, napped peacefully in a black top and jeans.

The NHS doctor, 31, appeared  in total comfort mode in the snap.

Princess captioned the picture uploaded to her Instagram account: ‘Omg a picture of me and ems 7 years ago ❤️ @dr_emily_official.’ (sic)

Her father, Peter, 48, is also the father to Junior, 15, with his ex-wife Katie, 42, while he shares Amelia, seven, and Theodore, four, with his wife Emily. 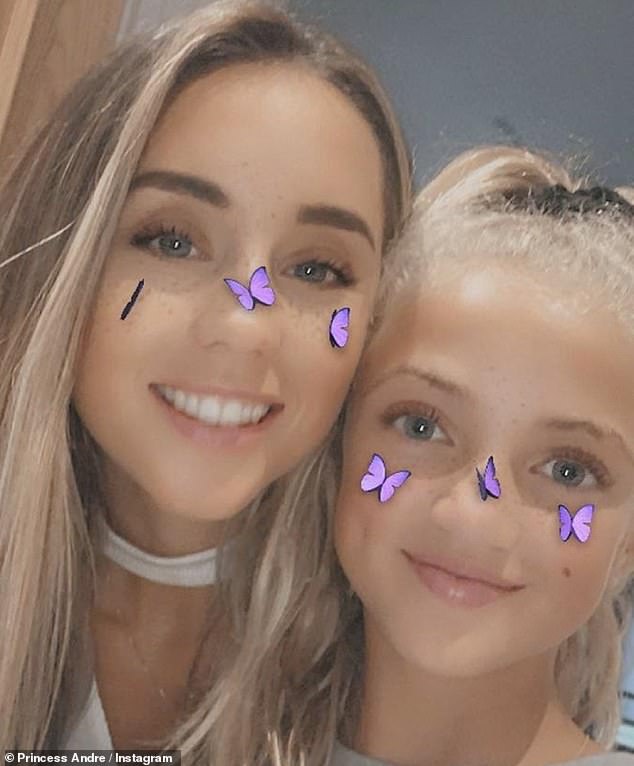 Baby on the way? Her father Peter Andre, 48, previously revealed that he and Emily, 31, who he married in 2015, may have another child in the future

Peter previously revealed that he and Emily, who he married in 2015, may have another child in the future.

He told The Sun: ‘Here I was trying to get my head around the thought of having one more child, but then Emily throws a bombshell on me of having two more children.

‘So now I’m really confused about what she wants. Before it was a definite no no, but now there’s a big possibility.’ 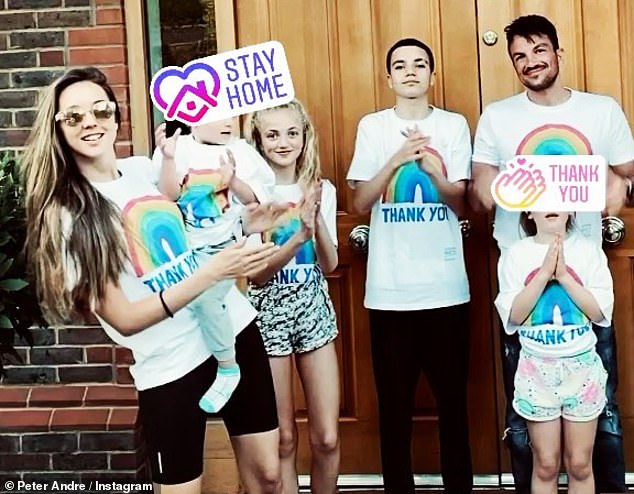 Blended families He is also father to Junior, 15, with his ex-wife Katie Price, 42, while he shares Amelia, seven, and Theodore, four, with Emily

However, the hitmaker added if it’s going to happen it would need to be this year as he doesn’t want to be changing nappies at 50.

Meanwhile his ex Katie is also the parent to Jett, seven, and Bunny, six, with her former spouse Kieran Hayler, 34. She also raised eldest child Harvey, 18, without his biological father Dwight Yorke, 49.

Katie responded to rumours last month that she is expecting her sixth child as she appeared on Steph’s Packed Lunch. 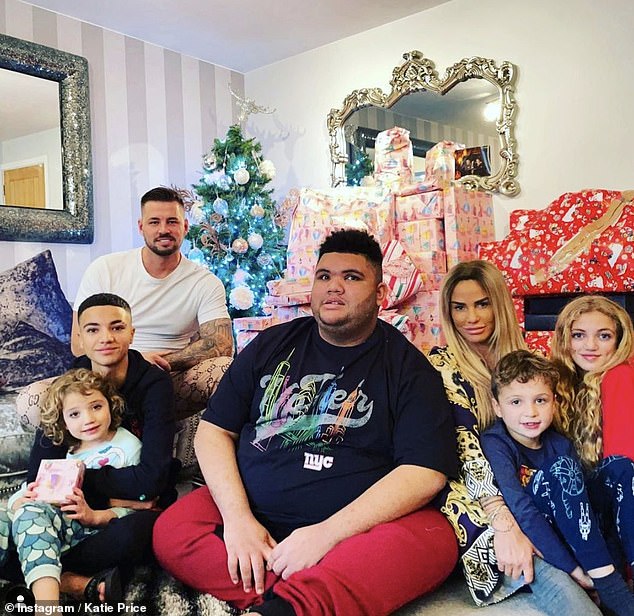 Big family: Meanwhile Katie is also the mother to Harvey, 18, from her previous relationship with Dwight Yorke and Jett, seven, and Bunny, six, from her former marriage to Kieran Hayler, 34 (pictured her children and boyfriend Carl Woods last Christmas)

The TV personality left fans guessing when she cradled her stomach last week in an Instagram photo and thanked boyfriend Carl Woods for ‘being a part of me’.

And while Katie kept coy over if she was pregnant, the reality star did tell host Steph McGovern that pictures ‘can be deceiving’.

Katie sparked speculation she was pregnant when she posted the cryptic photo – just days after her ex-husband Kieran announced he was expecting a baby with fiancée Michelle Penticost.

When questioned about the intriguing snap, Katie said: ‘I’ve put on weight. Anyone can speculate what they like. Pictures can be deceiving in lots of different ways.’ 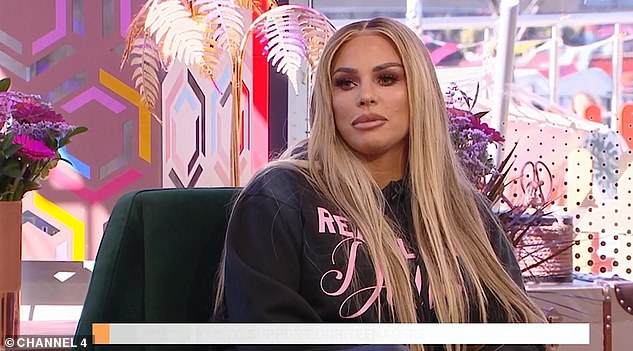 Cryptic: The TV personality responded to rumours last month that she is expecting her sixth child as she appeared on Steph’s Packed Lunch

Steph then asked if Katie has deliberately tried to spark speculation by posting the snap, but she said: ‘It was literally a picture, and everyone was saying you’re pregnant. I haven’t said I am and I haven’t said I’m not.’

While many believed the television personality was making a pregnancy announcement, other eagle-eyed fans noticed Katie and Carl, 32, had ordered a huge takeaway from Sheesh.

Katie said of her figure: ‘I genuinely have put on weight. I’ve put on two stone and I absolutely hate it.

‘And I’m fed up of moaning about it, but then I say that whilst I’m eating a burger so I can’t help myself.’ 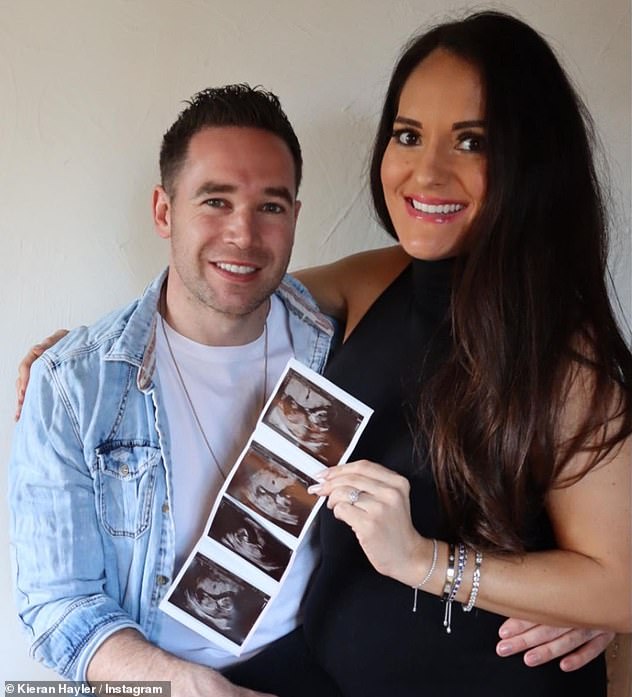 Congratulations: Katie sparked speculation she was pregnant when she posted the cryptic photo – just days after her ex-husband Kieran announced he was expecting a baby with fiancée Michelle Penticost