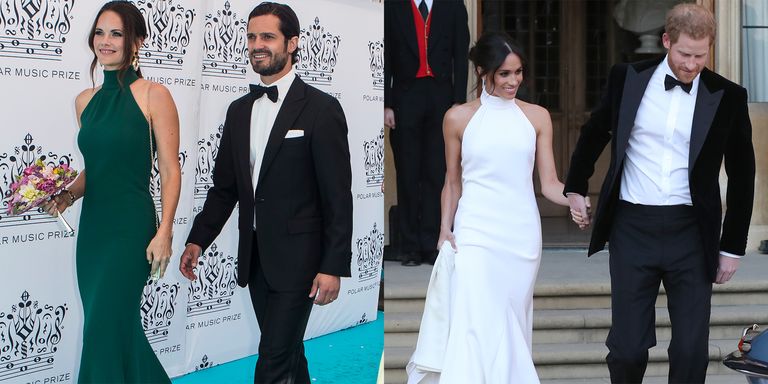 Is the halter neck dress on its way to becoming the official silhouette of the royals? While this dress style is nothing new, the Duchess of Sussex, Meghan Markle, gave it a bit of a revival last month when she wore it for her wedding reception to celebrate her nuptials to Prince Harry.

It seems another royal has been inspired by Britain’s newest Duchess—Princess Sofia of Sweden. Today in Stockholm she made an appearance with her husband Prince Carl and sister-in-law Princess Madeleine at the 2018 Polar Music Prize Award ceremony in a look that bared a striking resemblance to Markle’s reception look by Stella McCartney.

The princess wore an emerald green halter gown, and even her hair was done up similarly to the Duchess. Sofia’s long locks were pulled into a low ponytail with loose wisps around her face, which we’ve come to know as Markle’s signature. A gorgeous bouquet of pink and purple flowers completed her look.

I am so proud and honoured to have been chosen by the Duchess of Sussex to make her evening gown and represent British design. It has truly been one of the most humbling moments of my career. Congratulations Harry and Meghan! x Stella

It seems even the public demand for Meghan Markle’s halter gown has reached fever pitch. So, Stella McCartney has decided to launch a limited-edition capsule, aptly named “Made with Love” for her loyal clientele. To coincide with McCartney’s new London flagship that opened this week, 46 lucky people will be able to buy a replica of Meghan Markle’s reception dress in either black or white. That is, if their request is accepted by the designer herself. Those interested in even trying the dress on will have to request an invitation to the Bond Street store (click here for details).