Rachael Kirkconnell: Matt James Was the Love of My Life… and I Effed It Up! 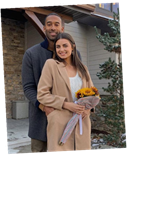 Rachael Kirkconnell had her past exposed on this season of The Bachelor.

Now, however, she’s trying to look toward the future.

The graphic designer — who won Matt James’ heart on Season 25, only to then be dumped due to some inappropriate behavior a few years ago — took to Instagram on Monday to share images of herself with some of the other women from her run on the show.

She also shared a lengthy message.

“Just when you think you found your way, life throws you onto a new path,” Kirkconnell wrote.

“It’s unpredictable, unexplainable, and things might not go the way you hoped for.

“while i certainly wish things turned out differently, i also believe there is a reason for everything.

“we may not be able to control situations thrown our way, but we can control how we deal with it, and i believe good can come out every circumstance.”

Kirkconnell, of course, was deemed the front-runner early on by all The Bachelor spoilers out there.

She and James clearly had chemistry early on… but then a number of old social media posts were circulated online.

They featured Rachael attending a plantation-themed party in 2018; and dressing up like a Native American; and Liking snapshots that included the Confederate Flag.

Once these photos resurfaced, the fallout was swift.

Kirkconnell apologized, recognizing these actions as “racist and wrong.”

Chris Harrison urged the public to withhold judgment, asking for “grace and compassion” when it comes to Rachael, while saying nothing of those affected by her decisions.

Harrison then said he was stepping aside as Bachelor/Bachelorette host in order to better educate himself on the topic of race.

From there, ABC announced two Bachelorette seasons in 2021 — with the first, at least, not being hosted by Harrison.

In her new post, Kirkconnell referred to her former co-stars when sharing that the “one of the biggest disappointments has been the overshadowing of these beautiful women and their stories.

‘they are some of the strongest, most brilliant, most extraordinary women and i was lucky enough to have met them.

“you all deserve more, but i promise to always stand by and support each of you in any way i can.”

Rachael went on to say that she didn’t expect this outcome with Matt but added, “i respect his decision completely.”

James said on the After the Final Rose special this week that he was crushed to see Kirkconnell’s social media posts and it made him realize that she couldn’t relate to his experiences as a Black man in America.

“There’s a lot of work that needs to be done. I have to take a step back and allow her to put in the work,” James said on air.

“We are not [together]. It was as tough as you can imagine.

“It’s heartbreaking. If you don’t understand that something like that was problematic in 2018, there’s a lot of me that you won’t understand.”

For her part, Kirkconnell said she was “living in ignorance” when she attended that antebellum gathering, adding on the special:

“I thought about how strong I thought our relationship was, so for him to end things, he must have been very, very hurt by everything.

“It was hard because I lost the love of my life and in the process of doing that, I hurt him. …

“I love him so much and I always will. I do feel like I finally do know what real love feels like.”

Rachael continued along these lines on Instagram after the special aired.

“Of course i wish circumstances were different, but i still feel blessed for the time we did have together and the memories we made,” she wrote

“i got to fall in love, and i truly believe he was the love of my life. he will always hold a piece of my heart.

“i’ll always be hopeful and believe what’s meant to be will be.”

Toward the end of her message, Kirkconnell encouraged her fans to be open to change in their own ways of thinking and wrote:

“at the least, i hope tonight sparks conversations and a level of understanding.”

Several of the other suitors from Season 25 shared support in the comments of Rachael’s post.

This included Pieper James, who chimed in as follows:

“Cheers to change,” including with this note heart and champagne-flute emojis.