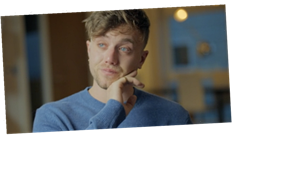 Roman Kemp has been seen breaking down in tears as he honestly opened up on struggling with suicidal thoughts a year before his friend’s tragic death.

Now, in a touching BBC documentary, titled Roman Kemp: Our Silent Emergency, Roman has explored male mental health and discussed his own struggles with depression.

The radio show host revealed he has been taking antidepressants since the age of 15 in the touching BBC documentary.

In a clip Roman, who got a tribute tattoo to his late friend, can be seen preparing HIS breakfast and taking medication as a cameraman asks him what the medication was for.

He explains that one pill was a vitamin D tablet and the other was an antidepressant.

“They help me massively. They make my mood normal, they make me feel normal. They stop me from worrying about things that are in my head and that worry takes over sometimes.”

He adds: “And that’s when it gets too much for me. Some days are better than others. I really, really suffer if I don’t take them.”

Roman is then seen explaining how, a year before his friend Joe tragically took his own life, he struggled with suicidal thoughts.

He says: “There was one day in particular, a year before Joe died, when I was at my lowest.

“I just got caught out on my own brain on everything. How I looked, what I was doing wrong work-wise… ‘Am I doing my job because of who my dad is? Am I being a good boyfriend’.

“All of these pressured just came on top of me. I just remember being in the bedroom and not knowing what to do and the only thing I could do was go to the floor on my knees with my hands around my head and just crying and just I remember saying to myself: ‘What’s the point? Why am I carrying on?’

“And I just know that I just called my mum and I said to her… I think I wasn’t making sense, I was just crying. And she got in the car and she made sure that my sister was on the phone to me the whole time, she didn’t let me put the phone down.”

Roman breaks down in tears as he admits: “I’m so glad that I made that phone call.”

Later in the eye-opening programme, Roman is seen discussing with his mum, former Wham! star Shirlie Holliman, his struggles with depression.

As he discussed being diagnosed with clinical depression after he was taken to the doctors by Shirlie, 58, she admits: “No mum wants to say: ‘I think my child needs antidepressants’.

“I did have a battle, I remember saying to dad [Martin Kemp]: ‘I think Roman suffers depression’. And it wasn’t you suffered depression because your life was bad, I think it’s a chemical thing with you.”

If you have been affected by this story, you can call the Samaritans on 116 123 or visit www.samaritans.org.