They just can’t quit each other. Jersey Shore star Ronnie Ortiz-Magro and his on-off girlfriend, Jen Harley, celebrated her birthday in Florida on Saturday, October 27, days after he implied that she hit him and gave him a black eye.

The MTV star, 32, shared videos on his Instagram Story on Friday, October 26, that showed him driving in a BMW before arriving at a luxury house on the water at North Bay Village, Florida. On Saturday, he posted clips aboard a boat. Harley, wearing a pink fluoro bikini, could be glimpsed sitting behind him in one of the videos. Ortiz-Magro also shared an illustration of The Joker and Harley Quinn and tagged his baby mama in it. 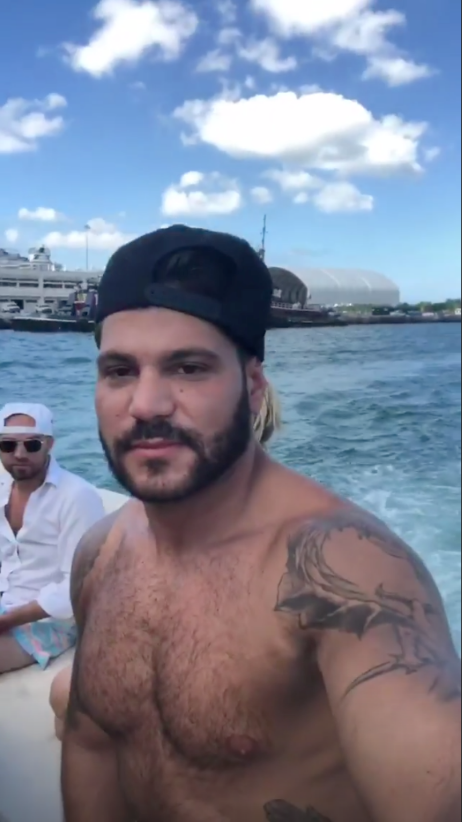 The show of togetherness comes a day after Harley posted about the reality TV star’s photo of his black eye. “No I will never speak to him again,” she replied to a fan on Friday about the pic, adding, “I’ve kept my mouth shut for to (sic) long.”

The birthday girl, who turns 31 on Sunday, October 28, shared a series of text messages between her and Ortiz-Magro on Instagram on Friday, writing, “the truth about the Black eye lol.”

“I’ll fix it baby,” a message allegedly from Ortiz-Magro read. “U want me to post something say that I reacted out of anger and that it was a double sided incendet (sic) and we are working at making things better so we are never back in that situation again.”

“Lmfao. Nahhhh so it look like your so scared of me you had too,” Harley replied, adding that Ortiz-Magro made her “wanna puke right now.”

The pair, who started dating in July 2017, have documented their tumultuous relationship — including cheating allegations and an arrest for domestic battery — on social media and on Jersey Shore: Family Vacation.