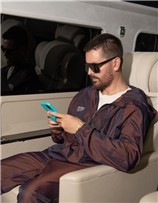 It’s been an odd year for Kardashian exes.

We’ve witnessed all sorts of insanity, including Kanye losing his mind over Pete Davidson and Tristan Thompson getting sued for paternity.

And then there’s Scott Disick, who’s been acting out a bit, seemingly in response to Kourtney Kardashian and Travis Barker’s engagement.

Scott has always had an eye for the ladies — even, unfortunately, when he was still dating Kourtney — but these days he’s taken his womanizing to an absurd new low:

Yes, according to multiple sources, Scott has entered a “throuple” relationship with two models, both of whom are not yet old enough to legally drink.

Disick went public with this unconventional arrangement during a three-way date at LA hotspot Nobu on Thursday night.

His companions for the evening were two college-aged women who sat on opposite sides of the 38-year-old father of three in his usual booth.

On the right was Dakota Busey, a 20-year-old student reportedly majoring in intergalactic public relations, which is apparently a thing.

Onlookers say the ladies dined on maraschino cherries and cocktail onions while Scott adhered to his new vape-only diet.

“It’s not that weird,” Disick explained to a TMZ cameraman who approached the group as they made their way to Scott’s Tesla after the date.

“People in other countries practice polyamory all the time, and no one makes a big deal out of it. I just read that Vladimir Putin impregnated his mistress while he was still married. I think that’s beautiful.”

Dakota took a similarly modern view of the arrangement:

“When aliens return to this planet to claim the souls of his persecuted children, the petty affairs of man will matter not,” the comely coed gushed.

“All non-believers will be condemned to an eternity of damnation anyway, so like, you might as well do whatever you want.”

Asked how he imagines Kourtney will react to his new relationships, Scott was optimistic:

“When I found out she was dating one of the guys from Blink-182, I figured it would be the dude who sang, ‘Where are youuu?’ on that one song. That sh-t was tight,” Disick explained.

“When I found out that she was banging the drummer — no pun intended — I realized I can do whatever I want, and she can’t really complain,” he continued.

At that point, Disick hopped in his Model X and folded his arms as he pulled away, seemingly in order to demonstrate the car’s self-driving capabilities.

“Joe Biden can ess my dee, ’cause I ain’t gotta worry about gas prices. Let’s go, Brandon!” Disick shouted through the sunroof as the car made a dangerous left onto La Cienaga Boulevard.

Moments later, Scott returned to the Nobu parking lot upon realizing that he left Montana standing on the curb outside of the restaurant.

“Still getting used to this throuple thing!” he explained.

Okay, if you haven’t figured it out already, this article is an April Fools’ Day joke.

But hey, if it inspires Scott to try out the throuple life, then we’ll be proud of the role we played in this exciting new chapter of his life.