Scott Disick to Kourtney Kardashian: I Hate That You’re Dating Someone New! 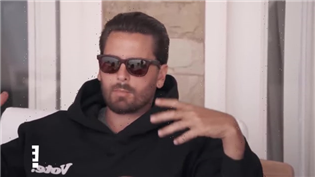 Kourtney Kardashian and Scott Disick have been broken up for several years.

They’ve each had multiple partners since going their separate ways, and they’re both currently in relationships that appear to be serious.

But despite all of that, much has been made about what appears to be a lingering sexual tension between the exes.

Scott and Kourtney have three kids together, of course, so it makes sense that they would still be in regular contact.

But as a new preview clip of this week’s Keeping Up With the Kardashians reminds us, Disick and Kardashian’s conversations are not the kind one typically hears among co-parents.

It’s important to note that the scene was filmed before Kourtney started dating Travis Barker.

And at that point, Scott had not yet entered a relationship with Amelia Hamlin.

So when this conversation occurred, there was a chance that the former couple might attempt a reconciliation.

That never happened, of course, but the scene is all the more interesting because of the fact that we know how the future unfolded.

It’s almost as if Scott can’t bring himself to say what he really wants from Kourtney, because he knows how another go-round will end.

“It’s my insecurity, I feel like, I don’t like seeing you with another guy or a guy,” he explains.

“It hurt me when you were with somebody else and waking up to like looking at pictures of you with this guy you were dating. It was unhealthy and it made me upset and sad.”

Disick goes on to explain that his mind is only at ease during the times when Kourtney is not in a relationship.

“Now I wake up with no real problems, I’m carefree in the sense that I don’t have that, which used to take up a lot of space in my mind all day,” he continues.

“The big fear is, if you start dating again, it goes back to that, I have to feel a different way again and it’s just hard. It sucks.”

“Kourtney and I basically spend 90% of our lives together, travel together, do everything together, see each other every day and the only difference is at the end of the night we part ways and go sleep in separate houses,” he goes on.

Clearly, Scott is not happy with the present state of affairs, but he seems uncertain of what he can do about them.

“This whole limbo state isn’t that cool anymore,” he admits.

And I surely don’t want us both to wake up at 50 years old and doing the same thing.”

Well, on the bright side, it seems there’s very little risk of Scott and Kourtney re-entering the holding pattern that has defined so much of their lives in recent years.

But on the down side, if Scott was secretly hoping for a reconciliation, that seems more unlikely than ever these days.

Insiders say Kourtney is head over heels for Travis, a partner who possesses the maturity that Scott always lacked.

And if Kourt ever doubts that she made the right call, we’re sure Scott’s constant pursuit of teenage girls serves as a sufficient reminder that he’s still not husband material.