“Saturday Night Live” called out New York Gov. Andrew Cuomo, a Democrat, and U.S. Sen. Ted Cruz of Texas, a Republican, in the show’s cold open this weekend in a segment where the politicians were supposed to apologize for their separate scandals.

Both were welcomed on a show called “Oops, You Did It Again,” hosted by Britney Spears, played by “SNL” cast member Chloe Fineman. The premise of the show: Allow guests to give “lame” apologies — such as the decades’-late mea culpas the real-life Spears has received from celebrities like ex-boyfriend Justin Timberlake after the recent documentary “Framing Britney Spears.”

Cuomo, played in New York tough-guy style by Staten Island-born cast member Pete Davidson, seemed a bit reluctant to take responsibility over allegations his administration withheld data about nursing home coronavirus deaths and that he threatened people who spoke out about it.

While Davison as Cuomo grudgingly admitted that some nursing home deaths had been falsely counted as hospital deaths, he claimed the state was just “mov[ing] the bodies” in the same way he purported Disney World might if a guest died on the teacup ride but they pretended it happened in the parking lot.

He then gave a sheepish apology after prodding by Spears but suddenly flew into a rage, vowing he would bury New York City Mayor Bill de Blasio “in the tallest grave this city has ever seen” because the mayor recently called for Cuomo to be investigated.

“I’m sorry,” he told Spears, trying to regain his composure. “I get a little angry now and then — and always.”

Earlier in the sketch, Cruz was played by cast member Aidy Bryant. The senator was publicly lambasted last week for deciding to take a trip to Cancun with his family while Texas was embroiled in a winter storm crisis that left millions without power or drinking water.

“I am in a little bit of hot water, which I am told is a thing no one in Texas has,” Bryant as Cruz told Spears. 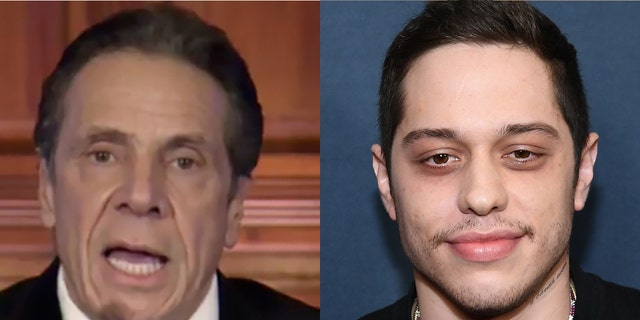 The fake Cruz, with beads in his hair and wearing a “Cancun Family Vacation 2021” T-shirt, carried a tropical drink in one hand and pulled a rolling suitcase with the other — just as the real-life senator was seen doing in viral airport photos last week.

“I deeply regret my actions over the last couple of days, most flying United,” he joked.

Fineman’s Spears asked Bryant’s Cruz if he knew why critics were calling him a “coward.”

“Yeah, ‘a coward’ is actually the nicest word I heard,” he answered.

After the fake Cruz admitted he pushed blame for the vacation on his daughters, fake Spears aggressively advised the senator that she speaks from personal experience: “Maybe leave your daughters out of it ’cause it can really mess with their heads!”

Later, when Cruz tried to commiserate with Cuomo, saying they were both “misunderstood men,” Cuomo told him he didn’t appreciate the comparison.

“I am a man, you are a clown,” Davidson as Cuomo replied. ” … If you mess with me, I will send you to a clown hospital — and when you die, I will not count your body.”