So, Some of the 'Stranger Things' "Kids" Are Actually Wayyy Older Than You Realize

The kids of Stranger Things are growing up—and so are the actors who play them, because, well, that’s how the linear progression of time works. But, since time marches on at a steady pace IRL no matter how much time passes in the fictional world of Hawkins, Indiana (or how long production is delayed for things like global pandemics), you may have started to really notice that the “kids” of Stranger Things are, for the most part, definitely no longer “kids” in real life.

For a little context, Stranger Things premiered in 2016 and the events of the first season begin in November 1983. By season 4 (the first half of which just dropped on Netflix for your binging pleasure), the show’s timeline has progressed to early 1986. So, while a little over two years have passed within the world of the show, six years have passed in the real world, which helps explain why the cast are starting to look so noticeably older than their onscreen alter egos.

Here’s a look at just how big the age gaps between the Stranger Thing actors and the characters they play are.

Millie was born on February 19, 2004, meaning she’s officially a legal adult in the real world. Eleven, on the other hand, was born in 1971 (according to the Stranger Things wiki, anyway), making the character 14 or 15 during the events of season 4. FWIW, though, Eleven and Millie were both 12 in season 1.

Mike’s age is a little more specific, thanks to the graphic novel Stranger Things and Dungeons & Dragons, which gives his exact birthday as April 7, 1971. Finn, meanwhile, was born on December 23, 2002, making him a full four years older than his character.

Like most of the kid characters, Dustin’s birthday is in 1971 (his is in May, apparently) meaning the character is 14 or 15 in the current season. IRL, Gaten has a September birthday, making him a few months older than Finn.

Caleb’s age gap with his character is about the same as the rest of the D&D crew, but if we had to award one of these guys a Most Visibly Grown title, it would be him.

Noah is the bb of the kid cast IRL—and one of the few Stranger Things kids who is actually still a minor (he’ll turn 18 on October 3).

Sadie turned 20 in April and made sure everyone knew she was a damn adult last fall when she turned in a wise-beyond-her-years performance in Taylor Swift’s All Too Well short film.

Nancy was born in 1967, making her 18 or 19 in season 4. In real life, Natalia is officially in her late 20s (but honestly still looking pretty baby-faced).

Jonathan was born the same year as Nancy, but Charlie is about a year older than Natalia in real life. Unlike her, he is not so eternally baby-faced. 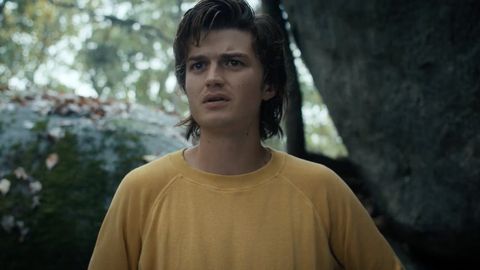 The Stranger Things “kid” who wins the “furthest from being an actual child” award is Joe Keery, who turned 30 in April and is currently playing Steve, who is a full decade younger than he is IRL. At least Steve is supposed to be a little older than the other teen characters?

Maya is actually significantly closer to her character’s age than most of the older Hawkins teens, so at least there’s that.

Priah and the Stranger Things costume and makeup teams deserve all the awards for making the obvious teenager above even remotely pass for an elementary school student.