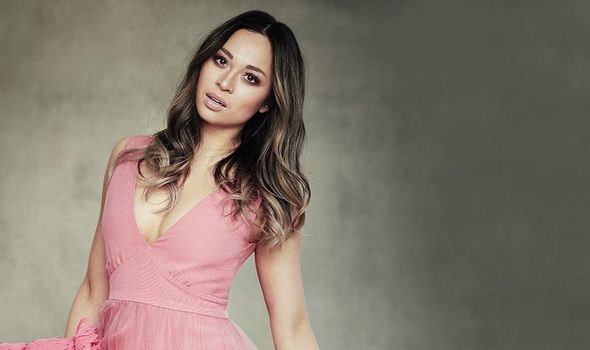 Katya Jones is on a mission. When we meet her – back in those halcyon days before lockdown crippled our ability to have face-to-face conversations – she looks neat and petite. Celebrities often look smaller in real life, of course. The camera is so much more forgiving of lithe, slight frames and dancers are smaller than most – it helps for when you’re being thrown in the air by Ed Balls, or any partner, come to that.

She’s wearing a black dress, simple but elegant for daytime wear in the city, and her long, straight hair is tied back in a very dancer-ish updo with a black headband adorned with pearls.

Her mission has been not to buy any new clothes for a year.

“I just thought I’d do it for myself and for the planet. A nice little challenge,” she says. “I love fashion and I love shopping so I wasn’t sure I’d make the whole year. But it’s been nine months and it’s the easiest thing I’ve ever done – easier than dieting.”

But is she still getting her fashion fix from accessories and refraining only from buying actual garments? That pretty headband for instance…

“My headband is my old tights,” she declares.

“I made it. I was sorting out my wardrobe. You can take clothes to the charity shop but no one’s going to want my old tights, are they?”

That’s the problem with starting to make small changes – they lead to bigger things.

Once Katya had sworn off shopping, she started wondering about where the things we discard go. Cotton clothes will break down but tights are made from nylon, which takes about 40 years to decompose.

“I didn’t want them to end up in landfill,” she says. “So I came up with some ideas for headbands.”

The headbands were meant to be for her, another small thing to keep out of the bin, but proud of her resourcefulness and eager to encourage others, she shared them on social media. “It was so nice. All these girls contacted me with pictures, saying, ‘Look, I did what you said and I love it.’” 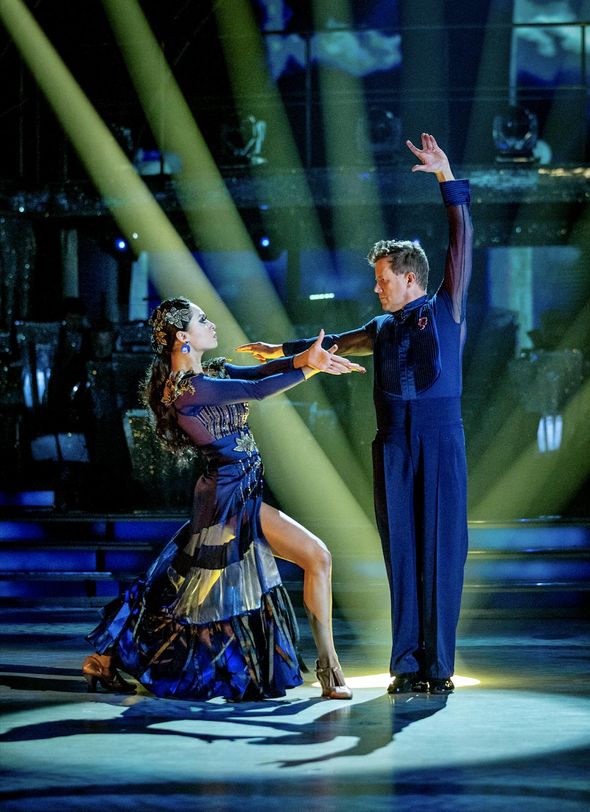 When Oxfam approached Katya to work on its Second Hand September, where consumers are urged to buy only second-hand clothes for a month, she was way ahead of the charity.

She had already decided that when her year was up she’d make a point of looking to second-hand shops before buying new.

“I was at my nan’s house back in Russia last year,” she explains.

“You know what nanas are like. She’s always trying to pass on her things – crockery, clothes, jewellery, anything.”

“Before, I would have been like, ‘Nan, I’m not going to wear your clothes, obviously not.’ But then I looked again and thought, ‘Actually, this is gorgeous.’ In the old days she had things made by a seamstress, so it’s lovely quality with hand-made lace.”

“I sent her a picture of me wearing it and she was so happy.”

Working with Oxfam has opened Katya’s eyes to that.

She’s visited its recycling plant, where 95 per cent of clothing can be recycled – even, as it happens, old tights, which can go into mattress stuffing.

But so many items can be resold and worn again. The spanglier bits go into Oxfam’s festival boutiques and classic items are sent to its dedicated vintage shops.

“Seriously, have a look in your wardrobe,” she urges. “You’ve probably got so much in there already. Get creative.”

She does this herself in her crafts room (the garage) at home and it’s not restricted to things she’s going to wear herself.

“For Janette [Manrara] and Aljaž’s [Škorjanec] wedding a couple of years ago, I made them personalised denim jackets. Janette is a Disney freak, so I painted Mickey Mouse on hers and for Aljaž I did this cool Fred Astaire skeleton thing. I used bits of trim and leftovers from other projects to decorate them.”

It helps to have a creative streak, which Katya says she got from her mother while growing up near St Petersburg.

“Mum used to make my dance dresses for competitions. Even at a high level I’ve worn homemade ones.”

She was only six when she began dancing. The daughter of a Russian oil company executive and his Korean wife, Katya remembers a whirlwind of classes from an early age.

“When I was younger my mum took me everywhere – gymnastics, painting, piano, singing, swimming… and dancing. Slowly people started saying maybe I had a talent for the dancing, so that’s where it began.” 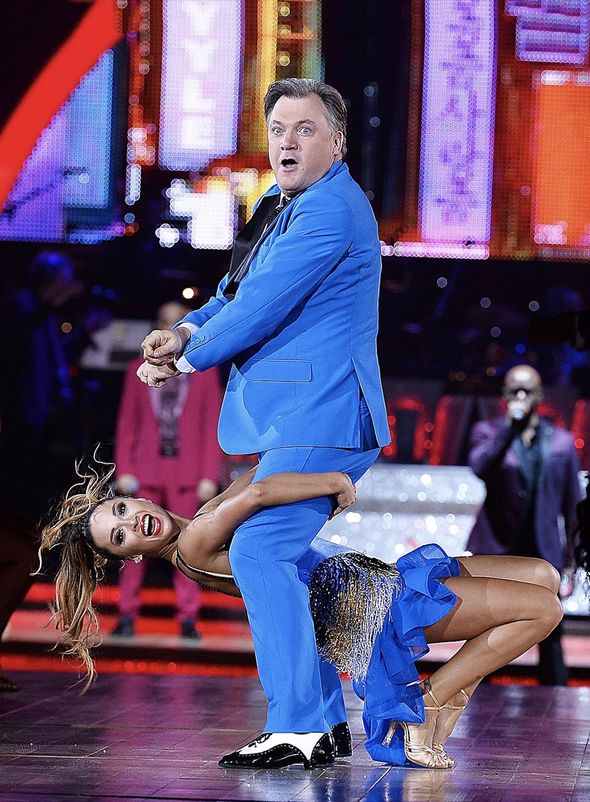 Soon it became a career, competing in international championships and, at this point, she says, fame and TV could not have been further from her mind.

In the blinkered world of competitive dance, being the best is all that counts.

“You just keep striving for that title. To be world champion,” she says. “I didn’t even think dancing on TV was a proper job.”

She looks calm and focused as she talks about it and it’s not until she mentions Strictly that she lights up like a glitterball on a dance floor.

“I love everything about the show. It’s my perfect job,” she grins – from the choreography and coming up with ideas of what will work on the show (she has a notebook she uses to write down ideas and moves) to meeting the special guests the show attracts and the glitz and glamour of the live performances.

“It gets better every year,” she says.

But her favourite part is undoubtedly in the training room.

“I love the teaching, taking beginners and watching them develop. To see these guys go from zero to tango, quickstep, jive and incredible dances by Saturday night – the whole thing happens in three and a half days.”

“I still get overwhelmed. Me and Mike [Bushell, the BBC sports presenter and her most recent partner] did 12 to 13 hours every single session, but it’s such a great process.”

“You have this routine and Mike would say, ‘I’m not going to be able to do that,’ and I’d say, ‘Oh, you will. You will.’ People laugh about how I’m bossy, but I call it ‘aggressive positivity’. It works,” she laughs.

“Depending on how far you go in the competition, it’s really quite brutal. You’re introduced into this wonderful world then, suddenly, it’s over. Which is why the tour is such a nice round-up. 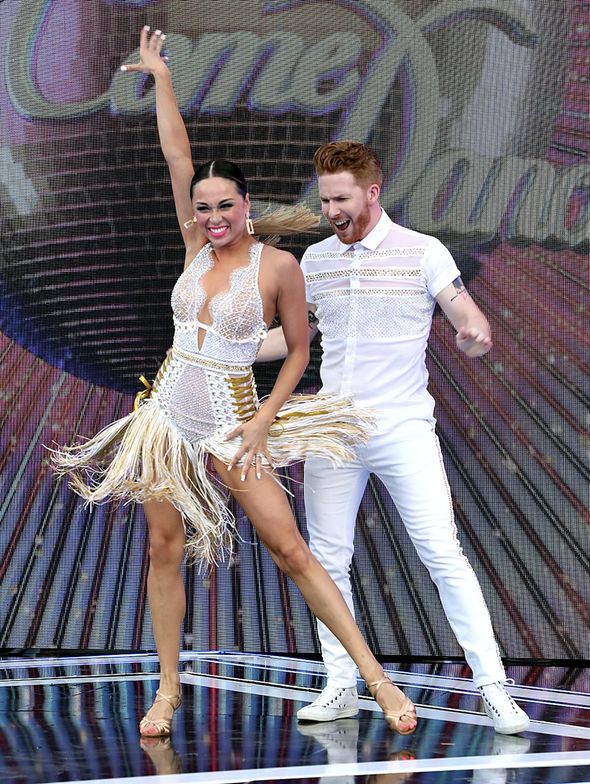 Mike and I had an amazing time. The crowd roar is something else.”

“Dublin was crazy this year, I’ve never heard anything like it. I thought I was Beyoncé.”

Also in that Dublin crowd were Katya’s parents, to whom she’s still touchingly close, managing to get back to Russia about three times a year to see them.

“I love going back,” she says. “Everyone is there. My friends, my brother and his daughters. It’s lovely.”

She thinks about this for a moment, pondering the blessing of a family you can rely on. She smiles, “But I don’t want to go for too long. It’s nice to come back and do our own thing.”

Katya does seem positive and happy, although last year was a tough one. Turning 30 can feel like a big milestone, especially in a profession that favours youth.

And shortly after her birthday, she announced she was splitting from her husband, fellow Strictly star Neil Jones. Although the pair remain good friends and dance together, the breakdown of their 11-year marriage was a low point.

“I hated that little chunk of time.”

“Turning 30 felt like a big thing. As a dancer, your body changes and I wasn’t in a good place and then big stuff was going on at the same time,” she reveals.

“I got hit by the dark side of fame at that point. Being criticised on social media is tough. But it helps having amazing people around you that love you and having things you’re passionate about.”

“Eventually it passes and you come out the other side. Turning 31 [on Tuesday] feels so much better.”

“It was a transition but I already know so much better who I am. I’m still friends with Neil and we still dance together. We take it lightly. We have such a good relationship that we can do that and we still support each other in whatever we do.”

Oxfam is helping to solve to the problem of fast fashion. None of the clothes donated end up in landfill and its shops raise vital funds for life-saving work around the world. See oxfam.org.uk.