Welsh, who played Doyle, a gangland figure in the sequel to “Trainspotting,” was shot in Edinburgh’s west end. Welsh's age wasn't clear.

The Edinburgh Police Division said officers were called to the incident following a report of a disturbance. When medical officials arrived, they discovered a man “seriously injured in the street and sadly passed away at the scene.” Police said they were treating the man’s death as “suspicious” and are investigating. Anyone with information was asked to contact police. Police did not name the man shot.

A number of media outlets, including The Scotsman and the BBC, confirmed the actor’s death. Irvine Welsh, the author of “Trainspotting,” paid tribute to the fallen actor. The two men are not related. 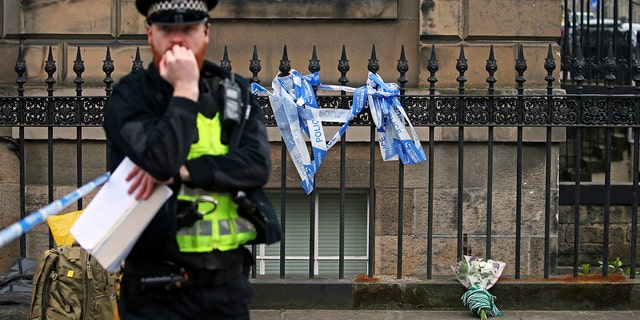 A floral tribute at the scene of the shooting of Bradley Welsh, in Edinburgh, Scotland, Thursday April 18, 2019.
(Jane Barlow/PA via AP)

“Bradley John Welsh, my heart is broken,” he tweeted. “Goodbye my amazing and beautiful friend. Thanks for making me a better person and helping me to see the world in a kinder and wiser way.”

Welsh appeared alongside Ewan McGregor in the sequel. He also appeared on Bravo’s “Danny Dyer’s Deadliest Men” in 2009. Welsh had no prior acting experience before appearing in “T2 Trainspotting.” Welsh was reportedly a lightweight boxing champion.